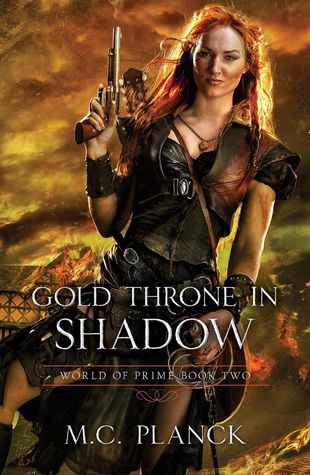 The end of Sword of the Bright Lady(World Of Prime: Book 1) saw Christopher revived from a rather grisly episode. The beginning of Gold Throne in Shadow has him lamenting the lack of calluses on his shiny new body. All things considered, that may be the least weird thing that has happened to him since he woke up in a strange new world of might and magic.

Given command of the regiment he trained and outfitted, Christopher is sent south to collect tael for the king. Tael is the currency of magic and power. Absorbed, it bestows rank. The larger the amount of tael, the higher the rank. Rank equals power of the magical and political kind. Patrolling the southern border is considered a cushy assignment, which immediately begs the question: what’s wrong with this picture? The answer would be everything or, to be more specific: politicking lords and clergymen, a hostile warlock, charming young women tempting him to break his marriage vows, an assassin and hordes of ulvenmen (think orcs) and their dinosaur mounts.

As always, Christopher is his own worst enemy. Every time he opens his mouth, he unwittingly insults his enemies and allies alike. He is more comfortable with his ability to wield magic in this book, but just as uncomfortable with the power over others these abilities give him. With all the attempts on his life, however, he barely has the time to raise enough tael to keep his head, let alone learn all the rules of the quasi-feudalistic society. His friends tend to be very forgiving – probably because he has the habit of resurrecting them when they die. He’s also making a select few extremely wealthy as he continues to roll out plans for an industrial revolution that will eventually turn the politics of this world upside down. It’s no wonder the nobility don’t like him.

His guns and cannons prove invaluable against the ulvenmen, allowing him to hold the southern border and mine enough tael to make the king very happy. But there is another power out there that reduces the petty politicking amongst the lords and clergy into meaningless babble and this is going to complicate Christopher’s ultimate quest, which is to return home to his own world and his beloved wife.

In my review of Sword Of The Bright Lady, I commented enthusiastically on the fact this world operates somewhat like a table-top role-playing game. Tael is XP (experience points). Defeat enough MOBS (mobile or monster) and you’ll gain enough tael to elevate your rank. You can also loot the corpses of your foes for equipment, some of which will be imbued with magical properties. I love this aspect of these novels. In essence, I often feel as if I’m reading a role-playing adventure. The urge to pick up my dice is grows stronger with every chapter.

But M.C. Planck hasn’t just written a dungeon crawl. Christopher is an unlikely hero – the best sort, in my opinion – and is just as liable to spend his experience on others as himself. He’s not interested in elevating himself to the highest rank in the land. He does not want to sit on any thrones. He just wants to go home. He’s not prepared to leave this world how he found it, however, and therein lays the true conflict of this story. The plight of the unranked in this world offends him. So, the first half of Gold Throne In Shadow sees him continuing to raise the hopes of ordinary men. His efforts to revolutionise this society – the factories and ranks that have nothing to do with tael and power – continue to make him enemies. He’s arming peasants, paying them gold and putting wizards out of business by instructing people how to make ordinary things like paper without resorting to magical recipes.

He’s disrupting the order of things and, while we saw a hint of reprisal toward the end of the first book, the true cost of his actions becomes more clear in this second book, Gold Throne In Shadow, leaving the reader eager for the next chapter in this story.