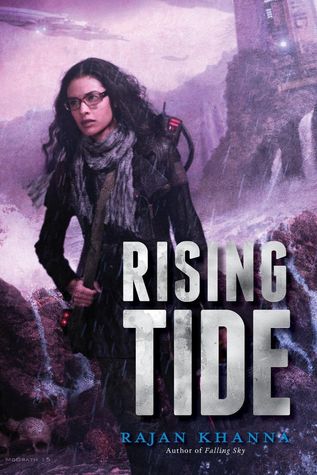 In Rajan Khanna’s first novel, Falling Sky, we meet Benjamin Gold, a fairly typical post-apocalyptic survivor in an atypical post-apocalyptic world. Combining zombies with airships, Khanna delivers the perfect setting for Ben. Touch is dangerous and the ground is a wasteland called the Sick. Being a loner and a somewhat self-absorbed prick are the sort of traits that keep a man alive.

If there’s one thing you can rely on, however, it’s that Ben will always make the practical choice. He’ll sacrifice one for the many and he sees the value in taking certain risks, until these choices become a little too personal or he meets someone for whom he is willing to sacrifice himself.

That someone is Miranda and she graces the cover of Rajan Khanna’s second book, Rising Tide. Miranda is an awesome character, one female readers such as myself have been looking forward to meeting. She’s smart, geeky, self-possessed and far from perfect. She might also have the answer to this zombie plague thing, so she’s important enough for Ben to change his ways. Also, he likes her quite a bit which makes Ben easy to manipulate.

You can’t have an apocalyptic, everyone-out-for-themselves environment without factions, mad despots and not so altruistic folks looking for their version of happy ever after.

So what’s the story here?

When we last saw Ben, he’d sacrificed his home and livelihood and the airship Cherub to save the island of Tamoanchan. He is rescued from the ocean, but not by someone who is going to make his life easier. An old friend/foe finds him and immediately sets out to even the score, using Miranda as collateral. So, the first half of ‘Rising Tide’ is Ben and Miranda winning free of their rescuer.

The second half is their return to Tamoanchan and the realisation that there is still an awful lot of work to be done. Miranda develops a successful test for the virus that decimated North America, but there is a new strain of the bug, one engineered for a different purpose. Miranda falls ill and people start dying. Then the invasion happens, which for Ben is something akin to a slap in the face with a battleship. This is what he sacrificed everything to prevent and now the island is under siege by disease and invaders.

The structure of Rising Tide is a little weird. The first half feels almost like a separate adventure, as if the author needed something else to happen before utterly betraying his lead character. I enjoyed the greater insight into Ben’s past but I did wonder how it would all tie in. It does, thankfully. The second half of the book moves very swiftly, which is a good thing, as it’s crushing. We’ve seen Ben come so far only to run into even greater obstacles.

What’s next? It’s hard to guess. Where Falling Sky left us with multiple choice questions, Rising Tide leaves us with the dreaded essay question. There’s still a lot of material to cover and we’ve been left in a situation where we’re not sure who will be with us for the next chapter. Which, of course, means I’ll be reading on.