Silver & Gold (out today!) is an anthology from Less Than Three Press featuring May-December pairings. To celebrate the release, I’d like to welcome author C.C. Bridges to my blog to talk about writing children and animals, and her story, “A Corgi Named Kilowatt”.

A famous actor (most likely WC Fields) once said never to work with children or animals. I don’t know if this rule applies to writers, but I did both.

My first novel, Angel 1089, features as a supporting character a little girl named Kayla and her protector dog, Trixie. Both play important roles in the story because Kayla’s existence and well-being are what motivate her father, Jeff, to keep the angel Gabriel hostage. Of course, things get a little bit more complicated than that. 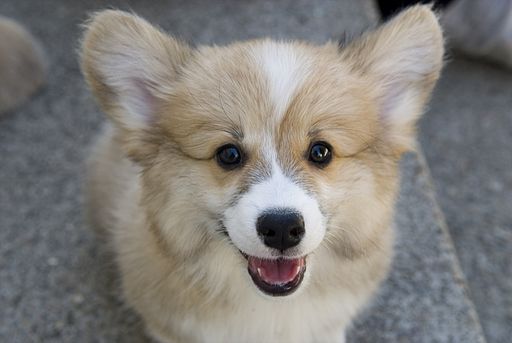 My most recent short story, “A Corgi Named Kilowatt”, also features a dog who plays a very important role. Kilo is so important, he’s in the title of the story! That’s because one of our heroes, Marc, is a dog trainer. And Kilo is the instrument that brings Marc and Evan together..

The most important thing to remember when writing dogs is that they are not furniture. It’s easy enough to put an animal in your story, but if you forget they are there then what’s the point? Dogs especially have their own unique personalities. I say it’s just as important to develop the character of a dog as any of the ‘human’ characters.

This is not exactly easy. I’ve had a dog for pretty much my entire life, and it’s so obvious how each dog is its own personality. Another challenge I faced is that the dogs in my life have been mostly hunting breeds. Hunters are super smart, and devoted to their owners. I’ve never owned a herder before, but I still wanted to cast a Corgi in my story.

Cue lots of research. To be fair, it wasn’t a hardship looking up cute pictures of Corgis!

One thing I’ve promised to do is never hurt or injure a dog in one of my stories. I can’t make any promises about the human characters, but all dogs are safe!

You can find her at ccbridges.net though she hangs out mostly on twitter @ccbridgeswriter.

From one-night stands to on-and-off love stories that span decades, the roads of love are diverse and have no map. One of the hardest relationships to navigate may be those with an age difference. Society isn’t always sure what to make of May-December pairings, and the odds seem stacked against them. But the wisdom of age and the optimism of youth is a combination not to be underestimated…

After his brother’s death, Navy SEAL Zev comes home to take care of his estate in “After the Dust” (Eleanor Kos), and finds ex-prostitute Julian on his brother’s doorstep. “In Coffee Boy” (Austin Chant), new grad Kieran interns at a senatorial campaign, and has to deal with being an out trans gay man in the workplace, his overbearing supervisor Seth, and his growing, begrudging affection for Seth—not to mention Seth’s crush on their straight boss.

“In One Last Leap” (Helena Maeve), Phillip carries the old wounds of his partner’s death, and he’s not sure how to deal with an attraction to the much-younger Ivan. “A Corgi Named Kilowatt” (C.C. Bridges) turns the teacher-student dynamic on its head when young TA Evan clashes with Marc, a dog groomer back at school at forty.

Maddie flirts with the older and mysterious Claudia at a movie, but doesn’t expect to see her again—especially not at a cake-tasting session for her best friend’s wedding. “The Memory of You” (Erica Barnes) explores not only the promise of chance encounters, but the reality of them. “Runner” (Sam Schooler) brings us Eden, who answers an ad for a caregiver but somehow ends up married and trapped in an isolated, dilapidated cabin with his snarly new husband, Mick.

When this deal breaks, Heaven will fall.

Catching two demon burglars is routine for Gabriel 1089, who’s one cog in an army of cybernetically modified humans protecting the sky city of Heaven. Until two turns into a twenty-demon ambush. When he wakes up, he’s missing his network-enabled halo—and one of his metal wings.

The down-level junk dealer tending Gabe’s wounds has hands that spark nerve endings he never knew he possessed. But for an angel cut off from Heaven, an attic in Old Trent feels more like a trap than a sanctuary.

Demons on his doorstep are nothing new for Jeff Werth. Ever since they saved his daughter’s legs, they’ve been calling in their marker. In exchange for his services—nursing Gabe back to health so they can use him as a pawn in their war with Heaven—they’ll consider the debt paid in full. Except having a powerless angel at his mercy feeds a rising desire that has him rethinking the deal.

Then the de-haloed Gabe begins having dreams that become visions…then memories. Until he’s not sure whose side he’s on. Heaven, or the simple family man who healed his broken wings…and made his heart whole.