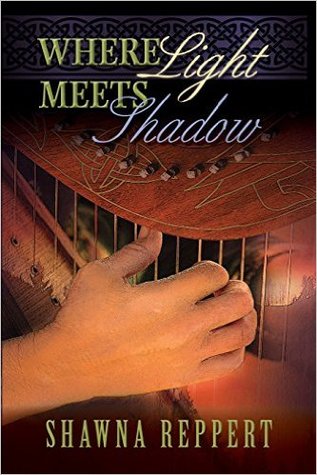 Where Light Meets Shadow by Shawna Reppert is an engaging mix of fantasy and romance. War nearly destroyed the culture of the Scathlan elves, and left their queen in a comatose state. Kieran has been traveling the mortal lands in search of new songs and scraps of legend. There are tales of powerful bards who could heal with song. If he could find these songs, learn them, he may be able to save his queen.

Caught in a blizzard near the border of his enemies, the Leas elves, Kieran is discovered by a Leas hunting party. He falls from his horse and is badly injured. Convinced he is to be captured and/or killed, he draws his sword on the hunting party, but cannot stand to defend himself. The Leas carry him back to their stronghold in the mountains.

The differences between the Scathlan and Leas are marked. Dwelling in sun-splashed places, the Leas are as fair and bright as the Scathlan—who build underground—are dark. But they are both elves, and were once brothers and sisters. War between their peoples has destroyed this bond.

Convinced he is a captive, Kieran spurns the friendly overtures from the Leas ruler and his son, Alban. But after father and son work together to heal his injuries, then continue to treat him as a guest, he slowly begins to trust them. A friendship blooms between Kieran and Alban, and when they discover they have a mental bond, friendship develops into something more.

Together, during his convalescence, Kieran and Alban continue his bardic quest, looking for evidence of this magic, only to discover their bond could be the clue both of them have been missing. Healer and bard together, weaving their magic, can perform miracles. Together, Kieran and Alban may be able to wake the Scathlan queen. But while their bond proves the two peoples can work together, not everyone has forgotten the war the separated them.

I really enjoyed this story. The back story and world building are carefully layered throughout, creating a nice degree of immersion without overwhelming the reader. The plot is intriguing, and Kieran’s dedication to his people is both admirable and ultimately heartbreaking. He is a stand out character—well written, and utterly believable in his motivations. Kieran’s friendship with Alban grows so slowly and sweetly that when they chose to become lovers, the moment is incredibly special, which is absolutely fitting to the story and the plot. It makes what happens next all the more difficult to read. I was emotionally invested in these two and wanted to see them have at least a chance at a happy ever after. Their special names for each other—every time they used them, I smiled. One of the sweetest romances I’ve read in a while.

I found the pacing of the climax just a little choppy—but that could have been me madly flipping pages to see what happened next. I also would have liked a little more ‘road time’. I’m a fan of ‘the journey’ in fantasy novels, or adventures on the road. It’s easy to understand why Reppert didn’t dwell in the multiple journeys of her characters, however, as there is a lot of ground to cover and a couple of secrets to be kept from the reader.

Overall, Where Light Meets Shadow is an entertaining read. I’ve never read Shawna Reppert before, but I’m encouraged to check out her other books and would definitely be interested in reading more tales from this world.