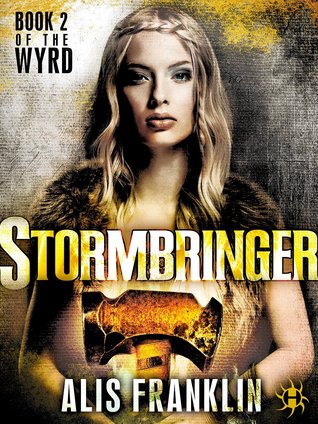 The good news is that the first chapter of Stormbringer: Book 2 of the Wyrd confirms all my suspicions regarding the last chapter or so of Liesmith: Book 1 of The Wyrd, the first book of Alis Franklin’s Urban Fantasy series ‘The Wyrd’. I can’t spill any further details here, though, as that would spoil the fun.

When you read a lot of fantasy or speculative fiction in general, you quickly come to the conclusion that dead doesn’t really mean dead. Even when there’s a body. Even when limbs have been flung to far corners of the word and the head has been squashed like a grape. There is always a Horcrux or some idiot on a mad quest to collect the limbs. That’s the beauty of stories.

The Wyrd is ruled by ‘the story’. Therefore Ragnarok can’t really mean the end of the world because stories don’t end, they simply reach conclusions which can be altered by whatever happens next. But every story has recurring themes and Ragnarok is a beauty. I mean, what’s more compelling than an apocalypse? So when Lain (aka Loki, etc.) returns to Asgard to say ‘Hey’, it’s hardly surprising that his presence is just the kick off the end of times game needs to start rolling all over again. This is the bad news.

In Asgard, Lain’s welcoming committee is made up of Thor’s kids, humorously referred to throughout the book as the Thunderbrats and the Brat Pack. Despite the fact Thor was apparently an amazing husband and father, his kids are jerks. Except for his daughter. She’s actually pretty sweet, which is why she’s being married off to the dwarves in exchange for a set of magic gloves and belt which are needed to wield Thor’s hammer. Only Lain knows where the hammer is hidden. Consequently, he is captured, chained and tortured by Thor’s brats until he agrees to help them gather up their birthright.

Meanwhile, Sigmund is back in Australia settling into his new home, the apartment he’s sharing with Lain. His first visitor is Hel, who is sort of Lain’s daughter. I say ‘sort of’, because Lain is a lot of people and he’s related to a lot of people. She has a favour to ask and in doing so reveals the fact Lain has yet another wife and son causing trouble in Asgard. Hence, Sigmund finds himself inducted into his own quest, best friends and former Valkyries, Em and Wayne at his side.

While I really enjoyed Liesmith, I loved Stormbringer. I was already prepared for Franklin’s quirky style – which really suits the characters she writes – but also felt she’d toned it down a little. This book is easier to read and the story is much more linear. If Liesmith represents a bit of a learning curve, Stormbringer works with what you know.

What doesn’t change is the inventive blend of myth and reality, Lain’s awesome Loki-ness and Sigmund’s adorable cluelessness. He’s no warrior, but he loves Lain with a ferocity that gives him courage. Also, he’s a gamer, so he’s got the strategy part of every fight down and he has great friends he can rely on. The novel is peppered with extra stories that are relevant to Loki’s past and they’re fascinating. Cultural references abound, some of which will resonate more strongly with an Australian audience. There is also plenty of action and more than a few sweet moments, with one in particular having me all sniffly. I really do love books that touch all points of the emotional spectrum. Finally, the story has a great conclusion that wraps up this episode nicely without precluding further adventures. After all, dead isn’t really dead and even Ragnarok isn’t really the end of the world.

I’m looking forward to whatever is next, whenever Alis Franklin gets around to writing it.