I really enjoy writing short stories. Despite the word count limit, a short story is an invitation to examine something more closely–an idea, an event, a slice of life. In “Out in the Blue” I take a look at what it feels like to be forty-five and ever aware of the big question: Is this all there is? I’m two years older than Jared and not single, or male, but I’ve never written my characters with an extreme bias toward one gender or another. I write people. So I found it easy to slip into Jared’s thoughts and examine what it must feel like to be alone and lonely, not as physically capable as he was twenty years ago, and facing a career change after years of allowing himself to become very isolated.

Every time I finish a new story, I think it’s the best thing I’ve ever written. Until I have had to rip it to pieces, stitch it back together, and read it ten more times, it’s my favourite. It’s usually right around the copy edit phase that my co-writer Jenn gets a note from me saying: I hate this story. Everyone is going to hate this story. Why did I write this?? That never really happened with “Out in the Blue”. I hope everyone else likes it as much as I do!

“Out in the Blue” will be released to subscribers of Dreamspinner’s 2015 Daily Dose Package “Never Too Late” sometime in June. For those who did not subscribe, you can buy this story now at the Dreamspinner website and other major retailers. Links below. 🙂 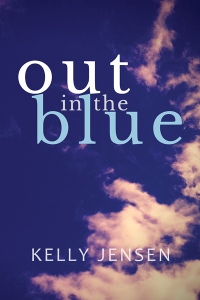 Out in the Blue

At forty-five, Jared Tailler suddenly feels old. When his employer grounds him, he starts thinking in terms of measuring his coffin. Well, not quite, but he’s creakier and hairier than he was ten years ago, and his closest relationship is the one he has with his frequent-flyer card.

It’s time to get out there.

On the first day of a five-day hiking trip, he meets Finley Macrae, a younger, seemingly brighter man. As they inch together in halting steps, Jared learns he’s not the only one lost out in the blue—Fin’s good cheer hides a turbulence deeper than Jared’s midlife crisis. Maybe together they can find the trail to happiness.

A story from the Dreamspinner Press 2015 Daily Dose package
“Never Too Late.”

“This short novella is sweet and sexy and touching…”
— Goodreads review

“I truly loved this story. It’s short…will only take about an hour to read, but it’s packed full of depth and emotion.”
— Smitten With Reading