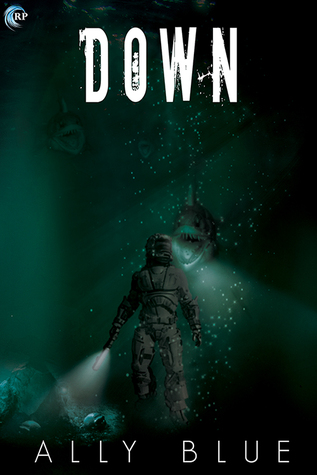 Down by Ally Blue is a surprisingly creepy book! The setting is one of the least explored vistas on Earth, the ocean floor, seven thousand metres down. They might as well be in space. The BathyTech 3 mineral mining facility is pressurized and air-locked. Any trip outside requires specialised equipment, including an oxygenated mist to keep the miners’ lungs from collapsing.

The story begins with the discovery of a spherical rock that cannot be identified. On scans, the object disappears, as if it were not there. Yet it can be picked up and carried. It exists. A team of scientists is called in to retrieve and examine the rock. They bring it aboard BT3 and weird stuff begins to happen. Seriously creepy stuff. Flickers at the edge of vision, whispering voices, and the feeling someone is watching. The auditory and visual hallucinations can be put off as just that until some of the crew begin to exhibit physical changes, fangs, claws, and purple glowing eyes.

When the changed crew become violent – as in partying with the guts of their victims – the connection between the horror and the rock is tenuous at best. But if the rock isn’t causing havoc, what is? This is the mystery that must be solved as one by one, much of the crew succumbs to the odd plague.

The story is split in to two points of view: Maximo Rees, a miner hailing from the streets of Dubai, and Dr. Armin Savage-Hall, one of the scientists sent to investigate the rock. A shared affinity for the mysteries of the deep brings these men together. For Maximo, who obviously had a rough childhood, the mining facility is more than a peaceful refuge. The explorer within can roam unfettered, appreciating the unique flora and fauna of the ocean floor and his natural curiosity makes him a natural addition to the investigative team when things start to go wrong. Armin is drawn to Maximo by that spark of curiosity, and the two men begin a physical relationship which deepens as they come to rely on one another through the days of horror.

For Armin, the mystery of the rock is an almost personal matter. There was another rock and another team – friends and colleagues – and no survivors. He is looking for answers to public and private questions. As the bizarre plague ravages the BT3 facility, he can’t help feeling partly responsible. Guilt is such a strong and interesting emotion.

I really enjoyed Down. As a novel, it met and even exceeded my expectations. I hadn’t expected the visceral horror, but it really suited the unfolding story. I did expect a little more romance, as Riptide usually publishes romance, but didn’t miss the hearts and flowers. There is a deepening affection between Maximo and Armin, and their relationship becomes important by the end of the story, but it isn’t the story. I liked that balance. This is science fiction horror, and when your crewmates are growing fangs and eyeing your midsection as if your intestines were a link of breakfast sausages, taking time out for more than a reassuring kiss on the cheek or a frenzied oh-my-God-we’re-all-going-to-die coupling would be unrealistic.

Also, I love that we’re seeing more books in all genres, science fiction, fantasy, horror, and paranormal as well as mystery, historical, and contemporary fiction featuring LGBT characters, whether there are romantic elements or not. Including these characters in our stories is a natural reflection of continued inclusion outside the world of fiction. I’m excited to see more books from LGBT publishers addressing this change.