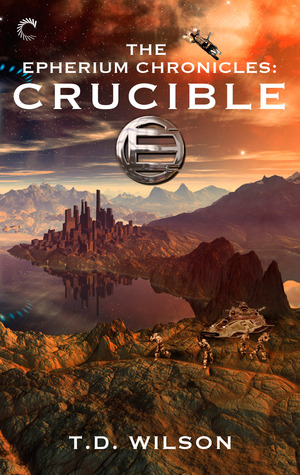 Twenty-five years ago, the Epherium Corporation launched three colony ships to settle new worlds. In command of the new flagship Armstrong, Captain James Hood is directed to investigate mysterious signals from those nearly forgotten ships. His mission is complicated by startling revelations regarding the deep sleep technology used to quicken colonist’s long journey and a plot seemingly devised to prevent him from catching up with them.

Crucible, book two in The Epherium Chronicles, picks up the story up one jump from the Cygni system where Hood hopes to find a thriving colony. When they do find evidence of the colony ship Magellan and nearly three thousand colonists doing their best to tame a wild planet, Hood faces perhaps his most daunting challenge. Twenty-five years have passed for these men and women and Earth is not as they left it. An alien enemy has decimated the Mars. Many will have lost friends and relatives. But that’s not all. Cygni system might also be in danger, from the alien Cilik’ti and perhaps the corporation that funded the original mission.

Hood must prepare the colonists for the visible enemy first, the Cilik’ti. But even as they brace under the threat of invasion and attack, the invisible enemy is there, plans unknown.

Author T.D. Wilson combines several elements to make a very compelling read. The plot laid out in Embrace, the first book of The Epherium Chronicles, is expanded upon here without too much complication. The personal threads are deepened, however, with Hood being reunited with his uncle and two women he knew as a boy. If he didn’t already feel beholden by duty, he now has more than one reason to protect the new colony.

We learn more about the Cilik’ti in Crucible, which is much appreciated. There is no big passage of history for the reader to wade through, however. All revelations come exactly as they should, on a need to know basis. It’s difficult to elucidate this part of the plot without spoiling a good chunk of the story, so I’ll move on to the action. There’s lots of it and it’s all pretty awesome. Space battles, ground battles, power armour and classic David and Goliath conflicts. Wilson skips from view to view seamlessly so that we get in on every aspect, too, from the colonists and teams on the ground, to the men and women aboard the Armstrong. These pages were thrilling and the conclusion is never foregone. I enjoyed the tie-in with Hood’s chess games as the captain measured his progress against that of his enemies. The battle is much more than a game, however. It is, in fact, the crucible which will forever change humanity’s relationship with the Cilik’ti.

Crucible is a very enjoyable read. It’s got intrigue, plenty of action and a good dose of heart. Best of all, however, it’s not a sequel that either lets the story dip into obscurity or skip off on a vastly different tangent. We’re definitely still heading forward here, with a deeper and even more interesting story. I’m really looking forward to seeing what happens in the next installment, Echoes*, due to be released 30 March 2015.

Watch for my review of Echoes on Wednesday!

2 thoughts on “Review: Crucible (The Epherium Chronicles #2) by T.D. Wilson”