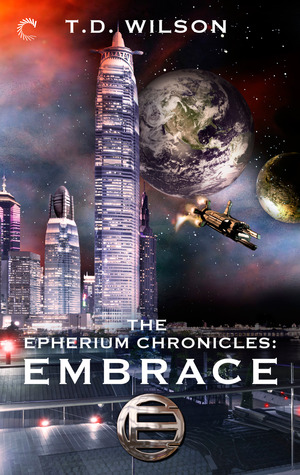 It’s the year 2155 and humanity has survived first contact and conflict with the alien Cilik’ti. A veteran of this war, Captain James Hood now has the opportunity to follow the dream that led him to serve in the Earth Defense Forces. Twenty-five years ago, the Epherium Corporation launched three colony ships to settle new worlds. In command of the new flagship Armstrong, Hood is directed to investigate mysterious signals from those nearly forgotten colony ships.

Technology has improved such that the Armstrong can navigate folded space in order to reach the ships’ location in weeks rather than years, but the journey will still be fraught with peril. The Cilik’ti are still out there and they could be the largest threat to any new colony. Accordingly, Hood must gather a team that is prepared for that and more.

Once out in the black, the Armstrong is plagued by myriad small problems that could be the growing pains of any new crew – personality conflicts, security issues and various ailments – and someone is sneaking around the ship. When crew members are found murdered, the two survivors fall suspect but of what plot, security chief Maya Greywalker cannot figure out. There are too many unknowns. Then there is the mysterious ship shadowing their journey. Unravelling the identity of that ship produces more questions than answers, however, casting an entirely new light on the current mission and the one from twenty-five years before.

Embrace starts slowly with the introduction of the new Akita class dreadnaught Armstrong and the man selected to captain her, James Hood. From there, pivotal members of the team selected by Hood are introduced with back story and complications. In between, the reader is treated to snippets of world-building and history. Though eager to get to the mission, I did appreciate the fact author T.D. Wilson took time to set the scene. There is something to be said for dropping the reader into the middle of the plot and letting them figure out where they are and who everyone is. Beginning at the beginning and progressing to the middle is a kinder journey and saves having to insert vast quantities of exposition into the middle of the action later on.

Once the mission launches, the pace picks up and from there, rolls into a tighter and tighter ball, gathering plot threads and characters as it runs. This is when you appreciate the groundwork. You know who everyone is and have a fair enough idea of their motivation but, in some cases, you’re still not sure if they are a friend or foe. Wilson is careful on that score, so that when crew members are implicated and exonerated, each revelation comes as a surprise.

When the mystery surrounding the original mission, that of the colony ships, is exposed, Embrace takes the leap from entertaining to downright fascinating. Then the book ends, which might be more annoying if the sequel were not already available.

All in all, I found the writing and story-telling solid. I enjoyed meeting Wilson’s cast of characters and look forward to seeing how their conflicts continue to grow and/or resolve as the main plot progresses.

One response to “Review: Embrace (The Epherium Chronicles, #1) by T.D. Wilson”