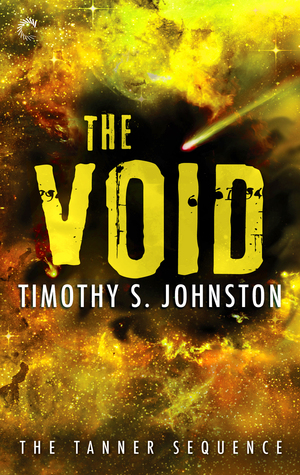 CCF Homicide Investigator Kyle Tanner has experienced his share of untenable situations. In the previous two novels of this series, The Furnace and The Freezer, he got up close and personal with a massive sun and found himself sinking through the ice of one of Jupiter’s moons. In between these extremes exists the void, a patch of space occupied by two seemingly unrelated ships, both suffering from a mysterious power loss and computer malfunction. Once again, Tanner must solve the case in order to find a way out.

Tanner is transporting convicted serial killer Reaper to Alpha system for execution. Travelling with him is his partner, Shaheen. Their jump ship loses power, stranding them in deep space, giving us the setting for The Void. Though she is a talented engineer, Shaheen is unable to figure out the cause of the breakdown. Every system in the ship is dead. She suspects it’s a computer malfunction but, without power, is unable to diagnose it. Tanner spends the time questioning his prisoner. There is something about the case that nags at him, a detail he can’t quite nail down.

After two days, they are approached by a CCF research vessel. A day later, Tanner is investigating a new murder. Hours after that, the bodies are piling up faster than he can count.

Having read The Furnace and The Freezer, I was prepared for the body count. Tanner probably isn’t a popular dinner guest. His cases might make interesting stories, but put in him one place long enough and two things happen: someone tries to kill him and lots of other people die.

When his prisoner escapes, the tenuous connection between the two stalled craft solidifies. Their proximity in time and space is not a coincidence and, as always, there is a countdown until the end.

Under the murder mystery in space theme of all three books lays the deeper, more insidious plot of the Council. Basically, a military dictatorship, the Council strives to control every aspect of citizen’s lives, even down to the jobs they do and where they do them. Their overbearing presence makes the settled systems of the galaxy as claustrophobic as the settings of Johnston’s novels. From the beginning of the sequence, Tanner has questioned the absolute authority of the Council, but has never contravened it. He is a loyal soldier but, in The Void, his patience is pushed to the absolute limit by a Council Representative and this frustration spills of the page, ratcheting up the tension of the plot. In turn, the twists of the plot expose the seamy underbelly of a society under watch.

The Void works well as the conclusion of ‘The Tanner Sequence’ and I enjoyed watching Tanner lose his temper and gain some temperance as he navigates the terrible twists and turns of his latest case. The biggest surprise isn’t the ending, though, it’s how he gets there.

The story of the council has more mileage. If Timothy S. Johnston doesn’t revisit Tanner, or that world, I’m sure his love of Science Fiction and suspense will have him writing something equally thrilling.

2 thoughts on “Review: The Void by Timothy S. Johnston”