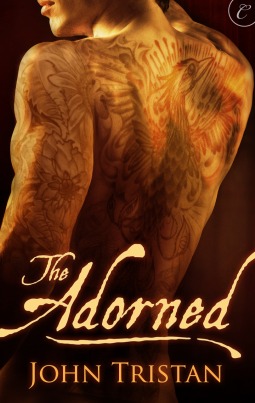 The tail end of a war can be as devastating as the first strike, or the most decisive battle. Soldiers become battle fatigued, their leaders jaded and the citizens, those who work to support the soldiers, who suffer privation so that they can continue to fight, are all but forgotten. Families robbed and left to flounder, children orphaned, men and women left alone in the world.

The Adorned by John Tristan tells the story of one such man. After the death of his father, the young Etan journeys to the Grey City where he quickly falls afoul of thieves. Left bleeding and penniless, he is rescued by a bondsman. Soon after, he signs away five years of his life for the promise of food and shelter, both of which are scarce. Before he embarks on a career of indentured servitude, Etan catches the eye of master tattooist, Roberd Tallisk. He is offered a different contract, the chance to become one of the Adorned.

The Adorned are playthings of the Blooded, who are the aristocracy. Imbued with magic, the tattoos of an Adorned appear to breathe and move. They are trained in the art of display and serve as companion and entertainment at feasts and parties. Like any courtesan, an Adorned soon learns to play the game of politics and Etan’s naiveté doesn’t exclude him. In fact, it makes him the perfect tool.

Etan’s heart is tender, however, and he tries to balance his actions to please all, but especially one man, his master. Tallisk is contrary and cantankerous, but his care for Etan is obvious to all but the young man. Their slow journey together is not the only delight in this tale.

Given the pace of modern romance, particularly the steamier variety, I had almost forgotten the pleasure of a love story that takes almost an entire novel to consummate. It’s the most delicious sort of torture. Every look, touch and guarded word coaxes you forward and every set back begins to feel personal. I suppose it is, in a way, as invested as I was in this story.

The Adorned isn’t a heartless tease, however. The plot is worthy and keeps the pages turning. I read every word, which is rare for me. Etan’s voice is compelling, and his slow metamorphosis into a man fully in possession of himself is worth the time.

Then, when things come together, they fall apart.

First, and foremost, this book is fantasy and the story doesn’t end simply because Etan and Roberd finally admit they’re in love. No, the plot continues around them and does terrible things to them. The theme I outlined at the beginning of my review is as important at the end of the book as it is at the start. The aftermath of a war is an uneasy time and often fraught with more danger.

I’m not going to give away the end of the book because this is one you must experience for yourself. If you enjoy simple, yet lyrical prose, richly detailed fantasy worlds, politics, beauty and love stories, then The Adorned is a must read. I found it absolutely lovely and finished it in a single day.

One thought on “Review: The Adorned by John Tristan”