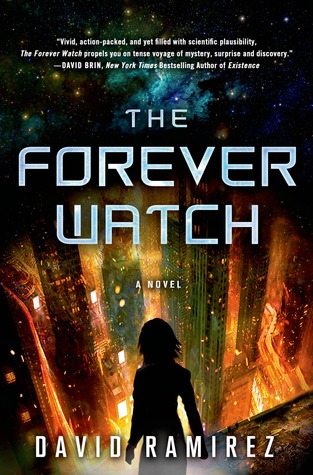 Humanity exists only between the stars, onboard a giant ship called The Noah. The journey to a new planet will take over a thousand years and in that time, the soap opera of life continues to play out, with more than a few dystopian tweaks.

Those who test well are Implanted and trained in a particular set of psionic skills. Visible filaments and plates – on the skin, finger tips, skull, face – give clues to the talent of each person. Those with the most sought after talents rise to ‘mission critical’ positions within the ship’s hierarchy, and those with only a thread of power clean up after them. It’s how society works, and how this one will maintain until they reach their destination.

Hana Dempsey is extraordinarily talented with ‘Touch’. This allows her to shape matter – even the ‘plastech’ that the ship is made of – into anything. Clothing, tools, shields. She can reshape a room, or given the right amplification, perhaps an entire building. As such, she has a role in City Planning. She and her team administrate the Habitat, from housing to supply.

Leonard Barrens is a police man, a peace keeping officer whose extraordinary strength and stamina is further enhanced by his Implant. An investigation into a possible serial killer prompts him to ask Hana for assistance.

Though from distinctly different social classes, the two friends find they have more in common than the case, the hunt for a mysterious serial killer. The Forever Watch is not a love story, however. It’s a thriller and the relationship between Hana and Barrens serves to highlight the structure of the society humanity has constructed.

The search for clues turns up more than a treatise on utopia versus dystopia. The ship – humanity’s salvation and mission – is not what they think it is, not quite, and the rules of their society are in place to cover a very specific and brutal truth. Or truths – one of which is not revealed until the very end of the book.

The Forever Watch is a novel of concepts disguised as a Science Fiction thriller. It reads well enough as a mystery, albeit somewhat ploddingly. In between clues and revelations, there is a lot of world building and introspection on the part of our narrator, Hana Dempsey. A lot of thought. Most of it is interesting as it pertains directly to the world of The Noah, which is fascinating. The ultimate mystery – what happened to Earth and her children – is worth the sometimes rambling narrative. It’s gruesome and scary. In fact, this book could easily be classified as horror. It’s also part police procedural, post-apocalyptic and full of dire warnings about a society that relies on too many rules. In some ways, it reminded me of Animal Farm.

It’s not an easy read. The first person present approach is difficult to process at times and, oddly, put distance between Hana and the reader. As I mentioned before, she thinks a lot and it’s mostly relevant stuff, a lot of it personal. But at times her thoughts felt more observational rather than inherent. As first book of author David Ramirez, it’s a worthy entry into the Science Fiction arena, however. The concepts are there and they’re compelling, even through the wordiness of it all.

Despite small difficulties, there was never any question I would not see the book through to the end. The story had me hooked and I enjoyed the characterisation of both Hana and Barrens. I’m definitely interested in what Mr. Ramirez will turn his attention to next.