My This Time Forever series is currently free to read for Kindle Unlimited subscribers!

Each of these books features a different couple and can be read alone, but the characters all know each other, and I check in with everyone in each book, building a small community around family–the ones we’re born to and the ones we find, friends–old and new, and the communities that bind everyone together.

(Also, if you start at the beginning, you’ll get Brian’s complete story and everyone tells me they like Brian’s book, Chasing Forever, best. Me? I like ’em all.)

Read This Time Forever now, with Kindle Unlimited.
All books, including paperbacks, are still available for purchase at Amazon while they’re enrolled.

Charlie King is doing fine. Sure, he’s a widower raising a teenage daughter who just got her first boyfriend, his book series isn’t writing itself, and he has a crush on his new neighbor—the guy next door. But everything’s just fine.

Simon Lynley is doing better. He moved to Bethlehem to fall out of love and rebuild his career. An affair with his neighbor isn’t part of the plan, but the attraction between them is too hard to ignore.

But when Simon’s ex follows him to Pennsylvania to reconcile, and Charlie’s life starts to feel like a video on repeat, everything comes apart. Charlie fears that he’s failing as a father, and Simon is a distraction he can’t afford. Meanwhile Simon doesn’t know if he could survive being left again, and he hasn’t come all this way to make the same mistakes. Despite their fears, it’s only together that they’ll find the strength to slay old foes and build the forever they’ve been waiting for.

Frankie and Tommy once dreamed of traveling the world together. But when seventeen-year-old Frank kissed Tom, their plans ended with a punch to the jaw and Frank leaving town without looking back. Thirty years later, Frank’s successful career as a journalist is interrupted by his uncle’s death and the question of his inheritance—the family resort where his childhood dreams were built. When he returns to the Pocono Mountains, however, he finds a dilapidated lodge and Tommy, the boy he never forgot.

Tom’s been keeping the resort together with spit and glue while caring for Frank’s uncle, Robert—a man he considered father, mentor, and friend—and his aged mother, who he refuses to leave behind. Now Robert is gone, taking Tom’s job with him. And Frank is on the doorstep, wanting to know why Tom is still there and why the old lodge is falling apart.

But before they can rebuild the resort, they’ll have to rebuild their friendship. Only then can they renew the forever they planned all those years ago. 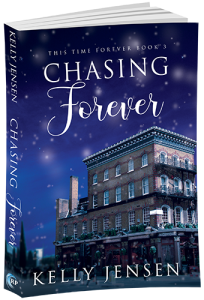 Malcolm Montgomery was a history teacher and track coach until an accident left him with two broken legs. He’ll recover, but life has knocked his feet out twice now. He’s not sure if he’s ready to try again, especially when it comes to love—and slick guys like Brian Kenway. Still, he needs help mentoring the school’s LGBTQ society, so he asks Brian to take some responsibility.

Brian has been hiding behind his reputation as a liar and a cheat for so long that he actually believes he’s that guy—until his nephew, Josh, turns up on his couch, tossed out for being gay. Brian has never considered being a father, but he knows all about being rejected by loved ones. Now Brian wants to be more: a partner for Mal and a role model for Josh.

But when Mal’s recovery is set back and the sad truth of Brian’s past is revealed, the forever they’ve been chasing seems even further from their grasps. It’ll take a rescue effort to revive their sense of worth and make Brian, Mal, and Josh into a family of their own.