Thursdays Are for Hiking

Sometimes to write better, you have to not write. I’ve been pushing hard the past couple of weeks trying to meet a deadline for Uncommon Ground (better known as my Aliens in New York project). I need to be done by tomorrow, and I’m maybe 3-4k from the end. Doable, right? Even more doable if I hadn’t taken day to hit the Appalachian Trail today.

Lying in bed last night, however, feeling as though my brain was leaking from my ears, and wondering if the pain in my shoulder was going to keep me up, I decided that the best thing I could do today was not write.

So I got up this morning and wrote 1300 words. I left the guys mostly dead yesterday, okay? I needed to revive at least one of them. And then torture him with the possibility the other guy might not made it. 😀 It’s what we authors do. Then I laced up my hiking boots and hit the trail.

I was going to hike the Mt. Tammany trail today. It’s one of my favourite hikes and I do it at least once a year, usually in May. Spring is a great time to climb the small mountains to either side of the Delaware Water Gap because, while it’s beautifully green, the canopy isn’t thick enough to block the view.

Because I made it to the trail head at Dunfield Creek ahead of schedule this morning, I decided to hike the Dunfield Creek trail to Sunfish Pond. It’s seven mile hike with a thousand foot elevation gain, broken into manageable sections. At no point do you want to just roll back down the hill and say “I give up.” But by the time you’re at the top, you know you’ve climbed a thousand feet. Your legs do, anyway.

After having my lunch on the shore of Sunfish Pond, I returned via the Appalachian Trail, which is wider and more evenly sloped, meaning it’d suck on the way up because you’d be almost constantly walking up hill. It’s a great way to return from the lake, though, and it’s generally an easier hike than the Dunfield Creek Trail which includes a couple sections of climbing and several creek crossings. 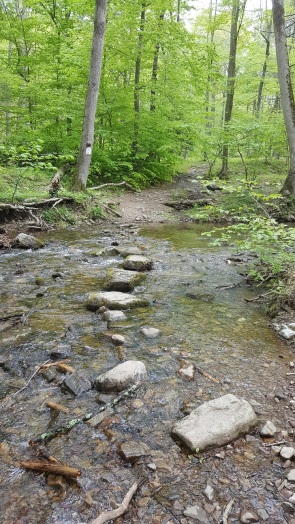 What I like most about spending a day in the woods is… That’s actually hard to pin down. I love walking along a trail and discovering what’s around the next corner. I love the rustle in the undergrowth, the movement of small animals darting away from my footsteps, or just going about their business. There’s the birdsong, and on a trail like this one, the sound of rushing water as the creek meanders through mild rapids and over gentle falls.

I also like the peace in my head. I generally don’t think about anything when I hike. I just tune into my surroundings and out of writer space. I think about my characters and stories sometimes, but it’s usually a fleeting thing. More, I’m watching where I put my feet and listening to the susurrus of nature. It’s incredibly restoring. And while my legs hate me right now, I know that I’ll sleep really well tonight and wake refreshed and ready to power through those last three to four thousand words tomorrow!

I’ll leave you with some pictures from today’s hike. For pictures of the Mt. Tammany trail, check out my post “The View.”

What makes the trails around my area so difficult is the granite. The trails are very rocky and not kind to knees, ankles and the soles of your feet. I do love the green we get at this time of year, though!

2 responses to “Thursdays Are for Hiking”