One more week until the release of my Valentine’s Story When Was the Last Time. I’m really excited about this one. Part of it is the cover. It’s difficult not to love seeing my name attached to something so pretty. But it’s the story that has me jumping up and down. This one’s for the married couples and enduring partners. For people who are still in love–and have forgotten what that means. For the comfortable folks! For everyone who has forgotten the couch can be used for something other than watching football. 😉 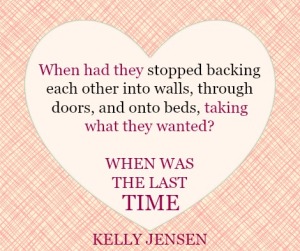 When Was the Last Time releases next Friday, February 12th! It’s available for pre-order at the following outlets:

For the release, I have a number guest posts and giveaways planned. I’ll be posting a schedule of those right here, of course. 🙂 Until then, here’s the lovely cover (designed by Bree Archer) and the cover copy!

When Was the Last Time

Paul Summerfield is stunned by the gentle reminder it has been over a year since he and his partner, Evan Akkerman, have made love. He vows to take Evan out for Valentine’s Day. Dinner and sex. Lots of sex. There’s only one catch—he’s supposed to be in San Francisco that week cataloging the art collection of an important new client. No problem, he’ll just change his schedule and cut his trip short by a day.

In San Francisco, Paul struggles with regrets and the fear his love is slipping away from him. Every call to Evan seems only to prove the distance between them is increasing. All this, and a key piece of his client’s catalog is caught up in customs. To keep their Valentine’s date, Paul will have to choose between the career he’s built over fifteen years and the man he’s loved for just as long.

4 thoughts on “Coming Soon: When Was the Last Time”