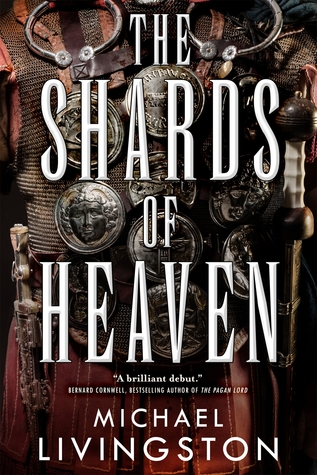 Every now and then Tor Books sends me something I did not request. Every time this happens, I open the envelope with equal parts excitement and trepidation. Who doesn’t like getting books in the mail? I do worry it might be a book I’m not interested in reading, let alone reviewing, but to date these random books have been something I’d like to read. I’ve actually squealed a little opening some envelopes. It’s as if Tor has a file on me or something.

The last envelope contained a lovely hardcover copy of The Shards of Heaven by Michael Livingston. Being a reviewer does have its perks. I was immediately intrigued by the cover illustration and the synopsis on the inside flap. I then sat down to read and pretty much didn’t stop until I got to the end, my only complaint being that the book did have an end. Oh and that there is no sequel published yet.

Anyway, I’m sure you’d all like to know what the book is about. Julius Caesar is dead and the future of his legacy is uncertain. When he comes of age, Caesarion – son of Julius Caesar and Cleopatra – stands to inherit ‘the world’. He is heir to Rome and Egypt. Another of Caesar’s adopted sons, Octavian, intends to claim it all for himself, however. Add to this mix a third son, the Numidian prince Juba, also adopted. Juba isn’t after a throne. His quest is vengeance, to be delivered through the Shards of Heaven, a series of fabled artefacts that will give the wielder power over Heaven and Earth. He is already in possession of one shard, Poseidon’s trident, through which he gains control of the sea. He believes it might have once been Moses’ staff. Juba’s search for the other shards allies him with Octavian as they both look toward Egypt: Octavian with an eye toward conquest and murder of his rival, Caesarion, and Juba for the Great Library of Alexandria.

The Shards Of Heaven combines history with fantasy. I adore books that do this. There are so many ways to interpret history, which is one of the reasons I enjoy reading historical fiction. The other is that who is to say there aren’t fantastic elements in our past? So much of what we count as myth and legend actually makes sense if we add in a sorcerer or a witch. A magic set of armour or a very special sword. Okay, maybe not, but such embellishments do make for very good stories.

The story of Juba’s quest is interwoven with real events: Actium and the naval battle incited to cover Antony’s retreat. Octavian’s victory and subsequent path to Alexandria. The timeline of the novel is constrained by this history and, while I might have liked to have seen a little more magic (more fantasy), I appreciated Livingston had to work with what he had and that is the story of Caesar’s children. The novel covers the events at Actium and Octavian’s arrival in Alexandria with all the gore one might expect from an epic historical tome. There is battle and strategy, betrayal and defeat.

The more important events, however, are the risks taken by Juba, Caesarion, his half-sister Selene, the librarian responsible for their education, and centurions, Titus Pullo and Lucius Vorenus. Their inclusion is a definite nod to this being a story about the bit players of history and how a small action can elicit a rather large reaction. Tying everything together, we have Livingston’s interpretation of the Ark of the Covenant, here called the Shards of Heaven.

While history falls as it must, the younger cadre, with the help of their allies, seeks the Ark. Securing it as Alexandria falls is an adventure in itself and also where the plot takes several interesting side steps. The novel ends decisively, but there is plenty of story left to tell. With the number of Shards unknown and the actual history of Caesarion vague, Livingston has all he needs to tie the next chapter of Juba’s quest into events as they move forward.

Obviously, I’m hoping for another random package in the mail but, failing that, I’m invested enough in this story to pick up the next book myself.