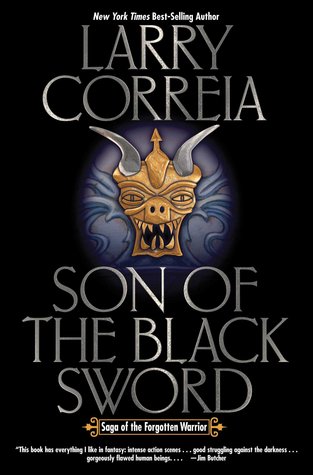 I have been looking forward to Son of the Black Sword ever since I read “The Keeper Of Names” in Baen’s Shattered Shields anthology (reviewed November last year). “The Keeper Of Names” is not only an engaging and more than competent short story, it serves as an introduction to a new venture for Larry Correia: the Saga Of The Forgotten Warrior.

Son Of The Black Sword opens with Ashok Vadal, Protector of the Law, battling demons risen from the sea. Where one was reported, two appear. Ashok is gravely injured and unable to fight both. One of the demons is distracted by another man with a spear, allowing Ashok to gain the upper hand and win the fight. Both demons are killed. It is then Ashok’s duty to kill his rescuer. The man is casteless, a non-person, and the Law prohibits non-people to touch weapons. Because the casteless’ intervention surely saved Ashok’s life, he is prepared to be merciful. If the man will put down his spear and walk away, Ashok will let him live. While they argue, the casteless man’s fate is decided by one of the warrior caste.

The incident serves as a brutal but compelling introduction to Correia’s world. It is also a hint of all that will follow. That one moment of compassion will change Ashok’s life.

Following the battle, Ashok is summoned to appear before the Lord Protector. Though he is humble enough not to want the title of Lord Protector for himself, it is assumed it will be offered to him. Ashok is not the most senior, but he is the most feared of all the Protectors. Over nearly twenty years, he has built a reputation for being the ultimate instrument of the Law. He is offered the title and a letter. After he’s read the letter, it will be his choice to either accept the appointment or retire from the Order.

When the contents of the letter expose the fallacy of his entire life, Ashok journeys to the only home he remembers and takes the Law into his own hands, setting in motion a series of events that are both unexpected and foretold. His actions put him on the wrong side of everything he believes in, but on the right side of a battle as old as time, that is between the downtrodden and their oppressors. He will become an unwitting and unwilling symbol for the casteless, for the non-persons, and a reason for them to rise up at last and take back what may rightfully be theirs.

It’s difficult to write something new when creating a world of fantasy. There is a sense every story has already been told, the mythos all pieces and parts, the magic borrowed. Son Of The Black Sword manages to entice the reader with enough familiarity – an embittered warrior, a magic sword, a prophecy – while telling a story that feels fresh. A part of this is Ashok’s character. His absolute adherence to the Law, even when it betrays him, is the fulcrum of this novel. Ironically, having such a stubborn man at the centre makes the rest of the story difficult to predict because you’re unable to guess what his tipping point will be until it happens. Until then, his action and non-action both will affect all other players and plotlines.

The lore here is fascinating and well told. I enjoyed learning the history of the world and the legend of Ramrowan. The politics are just complicated enough to feel real without being too difficult to follow. Where the book truly shines, however, is in the characters. All are well drawn and distinctively voiced. My favourite is Jagdish. He is the guy in the middle. A warrior of low rank and high aims. Unfortunately, every time his path crosses that of Ashok Vadal, his rank falls and his ambitions recede further into the distance. Jagdish is a good man, however, and one of the few who seem able to think outside of the caste box. I also got the feeling Correia enjoyed writing Jagdish as his chapters are full of the author’s trademark wit and humour.

Being a novel of the fantastically epic variety, Son Of The Black Sword serves as the beginning of the ‘Saga Of The Forgotten Warrior’. But it does deliver a complete and satisfying tale while setting up the larger story. I’m looking forward to reading on.