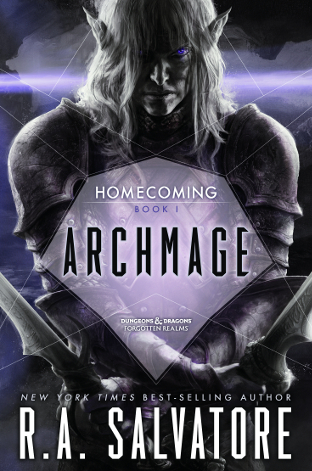 Archmage numbers twenty-eighth in ‘The Legend of Drizzt’. As always, I’ll preface my review with the caveat that you will get more out of these later books if you’ve read those that came before. At this point in the saga, a lot of foreknowledge of the world and the characters has to assumed, or R.A. Salvatore would spend half the novel catching everyone up.

The war for the Silver Marches is over, a tentative truce declared between the orcs and the combined forces of the dwarves, elves and humans. The Darkening – a drow dweomer that darkened same region – has been dispelled. With the orcs banished to the Spine of the World and the stronghold of Many Arrows disassembled, efforts to rebuild Nesmé and refortify the rest of the Silver Marches are underway. Old alliances are reformed and strengthened. Peace is restored (for now), and Bruenor Battlehammer has turned his eye back to legendary dwarven city of Gauntlgrym.

For the drow, this should be a time of consolidation. Their plans were thrown into disarray with the orcs’ defeat. The dark elves are among Salvatore’s most inscrutable races, however. The only predictable thing about them is the fact they will do the unexpected. They thrive on chaos. So the many divisions in drow society feed beautifully in this, making their losses akin to a bad day on the stock market. Investors immediately alter their strategy, and key characters begin padding their retirement plans.

All of Menzoberranzan (the drow city, and Drizzt’s birthplace) will be affected by the dwarves’ resolve to reclaim their own slice of the underdark. Gauntlgrym is currently operating as a satellite to Menzoberranzan. For Archmage Gromph and Jarlaxle’s band of mercenaries, however, the dwarf intrusion presents the perfect opportunity to meddle with the status quo. When would Jarlaxle not take advantage of that?

Far below the Prime Material Plane, we have the true seeds of chaos. Lolth, Demon Queen of Spiders, has plans of her own concerning…well, everyone and everything.

There isn’t a lot of Drizzt in this book. If I had a complaint about the last trilogy (The Companion Codex), it would have been that. The story has been growing wider for a while now, however, and many of the bit players have become important enough to have their own agendas which in turn affect the plot of the world – and every book. This latest trilogy, while perhaps a part of the Legend of Drizzt, feels less a part of his legend than part of the entire history of Toril. Drizzt is an important component of this story; we just don’t get a lot of time with him. I suspect that will change as this story arc continues, however.

We also lose touch with a couple of other key characters here. My guess is that with such a huge cast, Salvatore obviously had to send some folks off on their own quests in order to stay focused. I’ve always appreciated the fact these books rarely stray over the 400 page mark. Longer books can be intimidating.

Now that I’ve covered my quibbles, I’ll move on to what I liked about Archmage. Honestly – and I’ve said this before – I don’t think Salvatore could write a story I didn’t like. I’ve been reading his books for seventeen years with good reason. So the short answer is: I liked this one. I really liked it. Archmage is an emotional book, which shouldn’t have surprised me. There are a couple of touchpoints here that will tug the heartstrings of devoted fans. Usually books that delve deep into Menzoberranzan and drow politics lose me a little, but I found myself quite invested this time ‘round and that would be because of Gromph’s weightier story arc. The Archmage has always been an interesting and conflicted character, if harder to like than Jarlaxle. Probably because he has no sense of humour. Very few drow do.

The rest of the book is concerned with the effort to reclaim Gauntlgrym. One of my favourite aspects of Vengeance of the Iron Dwarf was the coming together of the dwarven armies under one banner, for one purpose. This continued alliance in the name of retaking the Delzoun birthright makes a great story. As expected, they will not be able to walk in and set up camp. There will be blood, from skirmishes to epic battles, and the cost of Gauntlgrym may be more than any of us suspect.