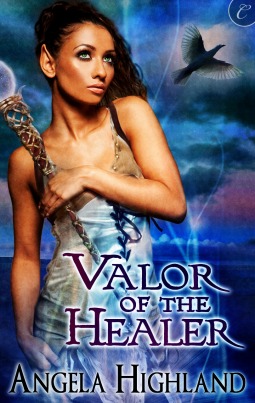 Valor of the Healer by Angela Highland is epic fantasy set in a robust world. I’d been looking for a book like this for a while and once I started reading, I found it difficult to stop. The three main characters had distinct voices and each called to me to finish their story. Of course, with the novel being fantasy, the story isn’t done at the end of this book, but this particular chapter is brought to a satisfying conclusion with just enough unanswered questions to invite the reader to continue on.

Elves are reviled in Adalonia. Their blood carries the curse of magic. Faanshi has enough elven features to mark her out – pointed ears, though now they are scarred from mutilation, and eyes with an unmistakable glow. But it is her ability to heal that makes her life a misery. She can’t control it any more than she can control her own fate. She is a slave, the property of the Duke of Shalridan, who is very aware of her heritage and power.

The Hawks are an order of the Church charged with seeking out and cleansing those unfortunate enough to be tainted by elven blood. Kestar Vaarsen is one such Hawk. His partner, Celoran, is used to Kestar’s odd premonitions. They’re mystifying, but obviously not evidence of magic. Kestar has never caused his amulet to glow as one with elven blood might. Following Kestar’s latest feeling toward the Duke of Shalridan’s Keep is going change their perception of what magic is, however.

Julian is an assassin. While the fact he is missing a hand and an eye might reflect badly on his proficiency, the botched mission at the beginning of the book isn’t his fault. He and his companion, an irascible fellow named Rab, have been sold out. The duke’s men were waiting for them. Julian is injured during his escape and then healed by Faanshi, whose magic compels her to fix whatever is broken.

For all his faults, Julian has a deep sense of honour or maybe he simply likes his tally sheet to balance. When he decides to gift Faanshi with her freedom as payment for her healing, he doesn’t expect to walk into a complicated plot. Nor does he expect that plot to be related to the foiling of his assassination attempt on the duke. Likewise, neither does Kestar expect to become embroiled in a web of secrecy and lies or for that veil of innocence requisite to any holy soldier to be cast aside.

Faanshi never expected to be free.

Julian, Faanshi and Kestar are supported by a cast of secondary characters that thicken the weave of this tale to a rich and weighted tapestry. There are more than three agendas here, but none are so disparate as to detract from the pattern. Author Angela Highland has put together a convincing world that feels thoroughly lived in and her familiarity with it translates to the sort of confident story telling that doesn’t slow for vast tracts of history and back story. I had questions about her world, but I suspect they’ll be answered on a need to know basis, which is fine. I’d rather read about what people are doing than where they are staying, after all.

It’s the characters that drew me back to this world over and over, though. Valor Of The Healer is the kind of book you think about when you’re not reading, that you look forward to picking up again when you have the time. Julian is my favourite. He’s a rogue who grows a heart, though I suspect he’s always had one. His character arc doesn’t cling to a prescribed formula, though, and his friendship with Rab takes on some surprising turns. Likewise, Kestar and Celoran’s partnership is thoroughly tested with the outcome uncertain. Kestar is the character I would like to get to know better. Faanshi is at the centre of this novel. She’s the woman who comes into her power but as she learns to control it, others seek to use it and her to their own ends – evil, evil ends.

The climax of the tale is thrilling, but as mentioned at the beginning of this review, there is still so much more story to tell. I already have the next book, Vengeance of the Hunter, on my kindle and I can’t wait to read on.