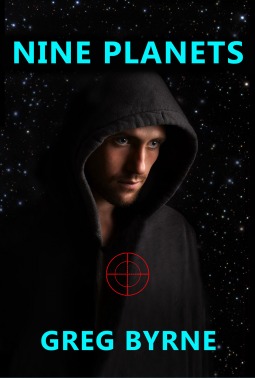 Peter Blackwell wakes from a coma into a world he doesn’t recognise. Gripped by a curse, the salvation of humanity is a bizarre holiday. The presents delivered on Father Nick’s Day stave off the despair that drives ordinary men and women to suicide. Blackwell is told he has the knowledge that will break this curse. He is also told that sharing the secret could mean the end of the world. Not a great position to be in. To make things worse, the head injury that put him in a coma has left him without memory and with the compulsion to always tell the truth. It’s as if he’d been put into maze with no open paths.

Blackwell is not without tools, however. He has perfect recall and no trouble making new memories. He also has nine snippets of the past, nine constellations of smell, taste, texture and emotion. He calls these his nine planets. The ninth is armoured and it is therefore assumed that the ninth planet holds the secret to saving the world.

Blackwell has twelve days to unlock the ninth planet. As he unravels the information hidden in the first eight, he puts together a picture of the world. Two brotherhoods, the Cabal and the Poor Men, have been at odds for over seventeen hundred years. The curse is a tool of the Cabal and only the Poor Men stand between them and the end of humanity. Each side has allies and traitors. Not sure who he can trust, Blackwell must nonetheless rely on the assistance of others to reach his goal. The most unexpected of these is an assassin sent to extract his secret.

Then there is the comet, the one hurtling toward Earth. The one a four year-old boy started painting the day it was first detected.

A glance at the blurb should prepare the reader for the fact Nine Planets by Greg Byrne is a little different. Ideas represented as planets? A world inflicted by despair that only a quasi-religious holiday can alleviate? Then there is the whole idea of a suicidal apocalypse. I’m a fan of apocalyptic fiction, but I can honestly say worldwide suicide doesn’t appeal. Of course, these elements are what make ‘Nine Planets’ such a fascinating read.

The book begins with an outtake of mythology. The origin of Father Nick’s Day. Then we meet Peter Blackwell and the tech is futuristic. As each player in the war is introduced, the story and the world complicates further until it’s a colourful tapestry. I admire authors who can juggle several plot threads and have them all eventually entwine.

The use of synesthesia as an interpretive tool is inventive and clever. Instead of a running commentary on how events make Blackwell feel, the reader is invited to experience everything for him or herself through flavour, colour and texture. Truth smells like limes, by the way. I really liked these details; they enriched the story without overwhelming it. Similarly, Byrne’s prose conveyed the plot without distracting the reader. His style is economical and sometimes downright poetic.

As the countdown toward Father Nick’s Day accelerates, so does the action. I found the book difficult to put aside after I passed the half-way point. Shortly after then, alliances shifted and truths were revealed and I lost the rest of my day in the race toward the end.

Nine Planets appears to be author Greg Byrne’s first novel. I’m hoping he’ll write another. I’d love to see where his imagination takes me next.