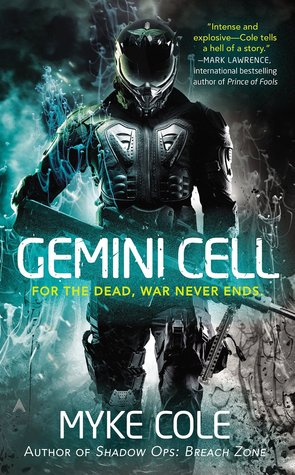 The movie Lone Survivor was my introduction to what a U.S. Navy SEAL is. Before then, I had a vague idea they were something like Marines in wetsuits. I realise I’m denting my own credibility here, but not all of us know everything there is to know about every branch of the military and there is so much misinformation out there in fiction and movies. The film begins with a look at the training a SEAL must go through in order to get their pin. It’s…insane. It really is. The rest of the film clearly demonstrates why that insanity is necessary, however, and these were the men I had in my head when I picked up Gemini Cell by Myke Cole.

Jim Schweitzer is a Navy SEAL. When a mission goes south, he doesn’t just duck and cover. He pushes through to complete his objective, regardless of the cost – which could have been the life of his best friend and brother in the SEALs – all for a container of dead bodies that get torn up in the crossfire. Questions follow him home where his wife makes it clear she’s less than supportive of his career. He’s always gone and could be gone again, anytime. All it would take is a phone call.

When the mission follows Schweitzer home, the consequences are dire. In an attempt to protect his family, he is cut down in a scene that is so brutal, I actually held my breath while reading. But that’s not the end of the story. Having already read the first three novels of Myke Cole’s Shadow Ops series I already knew there was magic in this world. Gemini Cell serves as a prequel, so I was expecting Schweitzer’s death to be short-lived. It is. Returned to his reanimated body by a sorcerer, Schweitzer begins his second ‘life’ with a neighbour, a jinn who will share his skin. Ninip is the soul of an ancient warrior that has been plucked from the void. Together, they will control Schweitzer’s patched up body. Together, they will continue to serve their country as a new type of soldier, as part of the experimental program known as the Gemini Cell.

Schweitzer soon proves that the tenacity that earned him his SEAL pin is what separates him from the other operators in the Cell. His battle for dominance of his body continues long after others have succumbed to the power of the jinn tethering them to not-death. These other operators end up properly dead or caged, used like rabid dogs on missions where subtlety is unnecessary. Schweitzer’s battle isn’t only physical, however. He and Ninip clash intellectually over what it is to be a soldier and a warrior. Their ideas on honour differ, as does their take on operational procedure. This facet of the book: Schweitzer’s examination of self and the comparison between a warrior of old and a modern soldier, a modern army, is deeply thoughtful and delightfully chewy. In a book of extremes, the battle between life and death, love and honour, this is the middle ground. What ties it all together and makes the mission, any mission, worthwhile.

There is plenty of action, though. Schweitzer is sent on missions as mysterious as the one that got him killed and each provides a clue to the puzzle of his existence and the tragedy that befell his family. But it’s the information he doesn’t have that will force him to take control of his not-death.

Myke Cole’s books are an intriguing mix of fantasy and military fiction. They read like science fiction set on an alternate version of our planet where magic is flowing back into the world. There are several things to love about this setting. One is the magic, itself. This isn’t a quasi-medieval world where magic replaces science. This is a world like ours, where any of us might wake up one day only to discover we can set fire to the cat. Er, breakfast. What would you do with that sort of power? Cole explores this dynamic thoughtfully and realistically. I find the fact the US Military immediately creates a unit for magically endowed soldiers amusing. It’s also a rather fatalistic, yet forward-thinking view. Honestly, who knows how we would respond to spontaneous cat barbecues or actual zombies serving in the armed forces. It’s an interesting quandary and one he explores thoroughly in all the books.

It’s not all operational procedure. Each book has a good dose of action and intrigue. They’re subtitled ‘Shadow Ops’ after all. The covers are adorned with soldiers in body armour. Truth in advertising.

I also love Cole’s characters. They’re very human, despite their abilities. Flawed and prone to second-guessing themselves. Not always the best operators, but always honourable. That’s a mix I like. Finally, not all his heroes are men. In Gemini Cell, there are female Navy SEALs! One of them is chief and she’s not overly feminizsd or masculinised. She just is who she is and that’s true for all the women who feature in Cole’s books. They’re good, evil, nice, nasty, solid operators and doubting sorcerers. As a dedicated science fiction reader who just happens to be female, I appreciate the balance.

It’s tempting to say Gemini Cell is Cole’s best book so far, and it is outstanding. But Breach Zone, the third book of the Shadow Ops trilogy, is my favourite so far, probably because it was the grand finale for a great plot arc. Here, we’re just getting started. Gemini Cell is different sort of story, though and I kind of expected that. Every book Cole writes is different. We’re not being told the same story over and over or even the same story from a different point of view.

It’s obvious Myke Cole hasn’t finished exploring his world and there really is room for a lot of new angles. The story might begin with Gemini Cell, but I hope it doesn’t end here.