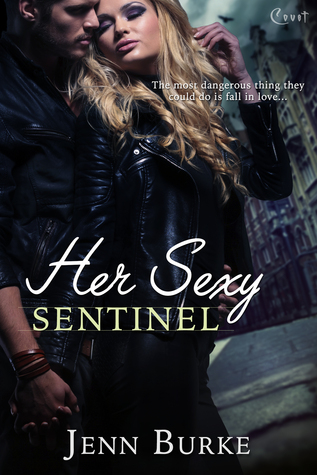 The most dangerous thing they could do is fall in love…

Callie Noble fled to Ottawa to escape danger. But she is far from safe. Overwhelmed by a strange new power she can’t control, Callie is terrified and painfully incapacitated. Her only hope is to seek the help of the one man who broke her heart…

Derrick Llewellyn is one of the Sentinels charged with the protection of the city’s mysterious secret. Seeing Callie again is a shock enough, but the electricity between them is stronger than ever. Still, loving another marked individual is forbidden, and Callie needs his help—not romantic complications.

But there are forces at work in the city, and Callie finds herself inexorably drawn into a world filled with danger and untold magics. A world where loving Derrick isn’t just forbidden…it’s the surest way to drive them both mad.

Jenn Burke is my writing partner and super-duper friend, so I’ve read this book three times, each a different version. Honestly, I liked the first as much as I did this last, because though I know Jenn worked hard to produce a novel that satisfied her, I’ll always love her stories regardless of polish—and I have a list of reasons why which will serve as my review of Her Sexy Sentinel.

Jenn’s characters are living, breathing entities. I know what they look like and a few pages in, I feel their perspective. I get them. That doesn’t mean they can’t surprise me. They do, all the time, and that only makes them more human.

In Her Sexy Sentinel, we spend most of our time with Callie and Derrick, but Chris, Risa and the other supporting characters are more than thin templates used to support the plot. They’re people, too, which is why I really hope Jenn continues this series one day so I can continue to read their adventures.

I adore Derrick. Skimming other reviews, I was disappointed not to find more love for him. Am I the only person who loves White Knights? Men so enamoured of honour and principle that you can’t decide whether to slap them or kiss them—possibly do both at the same time. Men—or indeed, characters—you can trust to have your back, no matter what, because they stick by their every annoying word. This is a man who throws strength at his doubts, who armours himself against hurt. If anything, he’s annoyingly human. But so is Callie. Her refusal to accept the existence of magic, let alone the fact she is suddenly imbued with it, is refreshing. She doesn’t immediately fall in with the plan and her struggle to accept her magic self is as fraught as her journey to find her actual self. This is her epiphany, her moment. The cusp that will change the rest of her life. No, she doesn’t deal graciously, and that’s why she’s so appealing. We feel her confusion and her anger.

Jenn’s imagination never fails to astound me. She doesn’t just hang a story off a romance plot. Her books tell stories in which people happen to meet and fall in love—while they’re doing all kinds of other cool stuff.

I love the plot of Her Sexy Sentinel. I love the suggestion that there is another world out there, right under our noses. Portals to other realms—whether they are planes or alternate realities, interdimensional portals, I don’t care. Our world is full of mysteries and I love the idea that we don’t always look to the most logical answer. That maybe there is a gate to hell under parliament hill. It probably connects to the basement of the Capitol Building in Washington D.C. and from there you can take an express planar blip under the Atlantic.

Jenn deftly handles the issue of magic versus mundane. Her Community exists to serve all of Ottawa, but only those with a touch of magic know what’s really going on. There are some lovely metaphors there.

Beyond the extraordinary, though, what I love about the romance in this book is the built-in panic button. There is nothing more enticing in a romance novel than the quandary of: they want to, but they can’t. That being said, the reasons why they can’t have to be compelling enough to make it work, to make all that hot and lusty tension worthwhile. Forbidden love is a good reason, particularly when one of your characters is all rightly honourable and the other hasn’t a clue. And when they’re attracted to one another to a ridiculous degree. Throw in the fact they nearly got it together before, but didn’t—and also never forgot the fact that they didn’t—and the pot of tension is bubbling over.

I actually texted Jenn as one point to express my EXTREME disappointment that I had flipped the page to discover it was the next morning. Why was it the next morning and why hadn’t they had sex yet? Of course, my reward was the scene worth waiting for.

It’s hard to review a book when you know the author. But it’s always a pleasure to read and review a book that I genuinely like and want to share with my friends. I recommend Her Sexy Sentinel for fans of Urban Fantasy and Paranormal Romance. I don’t think it’s beyond the grasp of a Contemporary Romance, reader, however. This isn’t a book that requires a lengthy glossary of terms. Jenn doesn’t baffle her readers with incomprehensible lore. Her writing is clear, concise and full of emotive encouragement. I really hope she returns to this world.

3 responses to “Review: Her Sexy Sentinel by Jenn Burke”