Yes, I realise my title has sexy connotations. It’s meant to. 🙂

When my writing partner, Jenn, and I joined the Carina Press author loop, we met another co-writing team, Nikka Michaels and Eileen Griffin. We immediately bonded over our love of male-male romance, writing and reading it, and the joys of having a writing partner. Although we write very different kinds of stories–Nikka and Eileen write contemporary romance and Jenn and I write more speculative stories, we all agreed on the same thing: love is love and happy ever afters are made of win.

We haven’t decided to collaborate on a book just yet (I write this with equal parts trepidation and amusement), but we did “sit down” and discuss co-writing in general and male-male romance more specifically. Co-writing can work in a number of ways. Some partners do more of the writing, others more of the editing. Some write chapter by chapter and others each take a point of view. So we’ll start there.

Do you each take a character?

Nikka Michaels   It depends on the book. The first two books of the In the Kitchen series we tended to take a certain POV, but for the third we’re both writing both POV’s.

Eileen Griffin   Usually, but like Nikka said, it depends on the book and on our own personal schedules.

Kelly Jensen   Yes. In the Chaos Station series we also share the writing of a third point of view character, the captain of the Chaos, Elias Idowu.

Jenn Burke   I enjoy the surprise of opening up the document to see what Kel’s character has done in his scene. Most of the time, it’s what I’m expecting, because I know her character as well as I know my own, but sometimes…

Is it hard to write each other’s characters?

KJ   At first, yes. I didn’t want to assume too much. But as you get to know the other character, it’s easier to do.

JB   When Kel and I first started writing together, it was tough because I think we didn’t want to step on each other’s toes. We’re over that now.

NM   It can be if the other character isn’t speaking.

EG   I totally agree that it is at first, but after a few chapters, each character develops a certain personality. Even though we each have an affinity for a certain character, once we’re fully into the book, it’s not that hard to swap characters.

How do you keep to your storyline if someone adds something unexpected?

NM   We usually talk about additions before we change the plotline. If we both agree then we plow forward. If not we make a note and keep moving.

EG   Even though Nik says she’s a pantster, we both have to have an outline in place in order for us to write comfortably. We just recently had a situation come up where we had to deviate from the outline, but before we could move on, we got online together and hashed out a new direction/outline. Our characters tell us what direction they want to go in, and so we’re okay with changing the outline, but only if both of us agree on the new direction.

KJ   If it’s something a character really needs to do, then we try to plot around it. If it’s a plot element that crops up unexpectedly, then we examine our plot as a whole to see if we have a problem or hole we hadn’t seen earlier. My characters tend to have really loud voices. If they’re making enough noise, then I usually assume I’m trying to write something that doesn’t work for them. That’s when it’s time to sit back and reexamine a scene.

JB   Communication and openness is key. Sometimes a new direction is exactly what’s needed; the characters drag you in that direction and you’ve got no choice but to madly write in their wake. But sometimes it’s not the only direction and as much as you might be in love with it, if your partner isn’t convinced, you need to hash out why it doesn’t work and come up with a compromise.

How do you keep the descriptions straight?

JB   We have files and files and pictures and spreadsheets and… (our shared folder is getting a little full).

NM   We need to do world building outlines. lol Next book we’ll definitely have to be more organized.

What’s your favourite aspect of cowriting?

KJ   Having someone else to share the workload. We’ve just finished revising a book and facing that task alone would have been more daunting.

JB   Sharing the story and the world is both my favourite aspect and the most challenging. It took a while to get comfortable with the idea that I don’t control everything about the world as I do with my solo projects. But the flip side is that being able to bounce ideas off Kel and having that support when something just isn’t working. There’s no time wasted in getting her caught up in my thought processes or where the plot was going or anything like that—she’s right there with me.

NM   I’m with Kelly. Having someone to split the workload and everything that is involved with writing a book: writing, editing, revising, promo…it would be a lot more overwhelming going solo. Also it’s just really fun.

EG   I’ll be honest: I’d be lost without Nik. Writing is such a solitary endeavor, so having her there with me to talk to about the characters, to plot with, to bounce ideas off of is worth its weight in gold.

NM   I don’t really have one. We’ve been co-writing for a while so we pretty much have a system down after so many books together.

EG   I don’t really have one either. I hate time zone issues since we live in different states and google docs can be highly temperamental sometimes. But I guess the least favorite as for me is getting our outlines down. I’m terribly OCD when it comes to our outlines, so I feel for Nik when I go into my Rain Man routine, but I’m getting better. Right, Nik? RIGHT???

KJ   Letting go of total control of the project.

JB   I don’t know if I’d say least favourite, but challenging, for sure, is leaving my ego at the door. Honestly, I think that’s an absolute necessity for co-writing and it’s not easy to let go of your ideas if your partner’s not down with them. (Thankfully, we can usually find a way to incorporate most of our ideas with some compromise!)

How did you meet?

NM   We met online on twitter through shared love of a book series.

EG   What’s more, we found out we clicked. She truly knows me better than most of my friends who I see regularly.

JB   Kel and I were both fans of video game Dragon Age: Origins and got chatting on the BioWare fan site back in 2009. We bonded over our mutual love of the game and its characters. Seriously, the chats we had via the site’s messaging system were epic.

KJ   Then you insisted on telling passport control at the Canada/U.S. border that you were on your way to visit someone you’d met online…

JB  Yeah, I think that was the longest I’d ever been questioned at the border. That lady was SCARY.

When did you decide to write together?

NM   After realizing we wanted to write stories together.

EG   Funny story. We’d been chatting online for a while when Nik showed me a submission call one day and said, “You know, we could write a short story together, just for fun …” The rest is herstory.

JB   About a year or so after we met online, we started roleplaying in a play-by-post forum, which gave us our first taste of writing together. We fell in love with our characters and the story we created for them in that setting, enough that we were inspired to try writing a book. Chaos Station is the second book we’ve written together.

KJ   One day we’ll dig out that first manuscript, dust it off and shrink back in horror at all the mistakes we made.

KJ   Short answer: Two penises are better than one! Long answer: I adore men and I love writing them. I also love reading and writing about men in love. We see a different side of men when they’re in emotional situations. Put two of them together and the dynamic and rules change completely.

NM   LOL Swordfight! Who doesn’t love reading a love story? I’ve written men and women together, men and men together and I imagine I’ll write all the combinations of letters together eventually. Love is love, no matter how you put the letters together.

JB   I love that m/m seems to allow for a wider range in emotional vulnerability for male characters than hetero romance. That’s a huge and enjoyable challenge to write. Also, there’s the added bonus that, by adding to the m/m genre, I’m helping to further the idea that love is love.

EG   I read an article not too long ago that summed up my feelings on this perfectly. Basically, in het romance, the men all have to be these alpha males who never show emotion and take charge of every situation and problem the author throws at him and his love interest. In m/m, we’re given the opportunity to write men with feelings, who aren’t always the strong ones, but are still worthy of love, none the less. 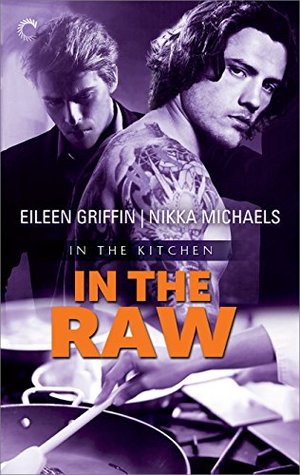 If you can’t take the heat…

James Lassiter has had a crush on fellow culinary student Ethan Martin for three years, but has never had the guts to make a move. Putting himself out there is hard, especially when under the thumb–and wallet–of his overbearing parents. Now that bad boy chef Ethan–who is always vying with Jamie for best in class–is struggling with the pastry course, Jamie suddenly has a reason to reach out.

Ethan doesn’t mean to be an ass–okay, so mostly he does–but even though he’s secretly hot for Jamie, he sure as hell doesn’t want help with pastry. Ever since his dad walked out, Ethan has been the one to hold things together and he’s done fine on his own. Except that he can’t get his cake to rise.

Jamie could be the answer to what Ethan’s been missing his whole life–someone to depend on. But with the two competing for the same scholarship, things suddenly get too hot to handle. And if Jamie finds the strength to go for what he wants, he isn’t about to settle for what he needs.

The war with the alien stin is over, but Felix Ingesson has given up on seeing his lover, Zander Anatolius, ever again. Zander’s military file is sealed tighter than an airlock. A former prisoner of war, Felix is attempting a much quieter life keeping his ship, the Chaos, aloft. He almost succeeds, until Zander walks on board and insists that Felix isn’t real.

A retired, broken super soldier, Zander is reeling from the aftereffects of his experimental training and wants nothing more than to disappear and wait for insanity to claim him. Then he sees footage of a friend and ally—a super soldier like him—murdering an entire security squad with her bare hands and a cold, dead look in her eyes. He never expected to find Felix, the man he’d thought dead for years, on the ship he hired to track her down.

Working with Felix to rescue his teammate is a dream come true…and a nightmare. Zander has no exit strategy that will leave Felix unscathed—or his own heart unbroken.

3 thoughts on “The Joy of Co-Writing”