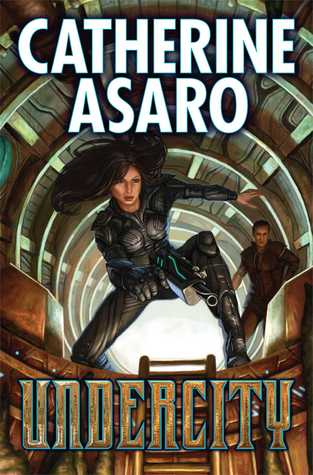 There are a few authors for whom I will buy (or request) every new book without even glancing at the blurb. Among these is Catherine Asaro. I did take a quick look at the cover copy for Undercity, but I will admit that when I saw the words ‘Skolian Empire’, glee fuzzed the rest. I did realise this novel is more peripheral to the saga, that it in fact begins a new series, but it represents a piece of the world I have come to adore and that is enough.

At age fifteen, Bhaajan escaped the slums of Cries by enlisting with Imperial Space Command. Now retired, Major Bhaajan works as a private investigator. Her reputation for due diligence and never giving up attracts an influential client who transports her back to the planet of her birth for an interview. Bhaajan hasn’t been back to Raylicon in years, but she hasn’t forgotten where she came from, which may be what her client is counting on.

The noble houses of Raylicon are so far removed from the slums of the City of Cries, they may as well be on another planet. House Majda perhaps even more so. In a reflection of history long past, they seclude their males, hiding them away under guard. It is a crime to even touch one of these men. One of the house princes has gone missing and the matriarch has hired Bhaajan to find him.

Using her knowledge of the Undercity, the canals and aqueducts that form the slums she came from, Bhaajan begins her search for clues. She finds little has changed since she left. Crime is still the number one form of commerce and children are still running in gangs. But a key component of the underground society seems to have broken down. They might not have much, but the dust gangs have always looked after their own. Now children are suffering neglect, the adults are fighting and the whispers no longer carry all the secrets.

Bhaajan finds her prince but, in doing so, she uncovers a much more sinister plot, one that threatens the Undercity more than starvation and neglect. She cannot ignore the children who begin to follow her, nor the man she left behind seven years before.

Undercity is divided into three books or parts. The first has been previously released as a novella called “The City Of Cries”. The second two parts follow directly on from the first, expanding upon the first story, exposing the plot responsible for Prince Dayj Majda’s capture. Undercity does read like a complete novel and, for those unfamiliar with the Skolian Empire, it would make a fantastic place to start. While the psi-talents of the Ruby dynasty do feature prominently in this book, the narrative isn’t bogged down by the history of the dynasty or the mechanics of their talents. Instead, Asaro has written an engrossing mystery.

Our hero, Major Bhaajan, is typical of her characters in that she is strong, talented and capable but not perfect. She has flaws and foibles and both are exposed as she first searches for Prince Dayj, then struggles with the decision she made seven years earlier to leave the planet of her birth. Circumstances conspire to keep her on Raylicon this time around and she has to choose between two hearts, professional and private. She’ll discover they’re one and the same.

As a long-time fan of ‘The Skolian Saga’, I really enjoyed Undercity. As always, Asaro delivered a tale rich with the embedded history of her world and bright with technical marvels. Her characters were engaging and intriguing and there is even a bit of romance. What really touched my heart was Bhaaj’s interaction with the children of the aqueducts. I spent the last fifty pages of the book sniffling into a tissue. I’m looking forward to reading the continuing adventures of Major Bhaajan.