Right, so in looking back over this year’s blog posts to determine when I last reported in on my reading challenge, I discovered that I haven’t for a while. I thought it had only been a month. Or so. Maybe longer. I was surprised to find out it had been three months. I did post in April, but about books I had been reading outside my chosen challengers. 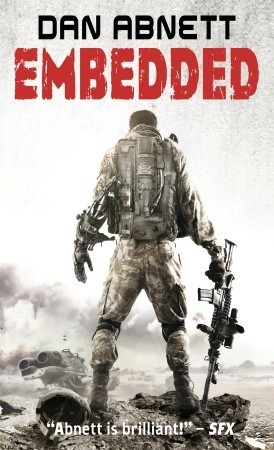 I haven’t got back to Destiny’s Road by Larry Niven. I’m not sure if I will. The book definitely falls in my interest zone, but it feels like a slow read, which means it requires patience. My schedule doesn’t allow much time for patient reads at the moment. Maybe later this year.

In May, I read Embedded by Dan Abnett. I discovered Dan Abnett while reading Armored, which is one of my favourite anthologies ever. As often happens, however, I got my wires crossed and bought Embedded thinking Dan Abnett had written a different story in the anthology—one set in the midst of a conflict, soldiers suited up in power armour, wondering if they’d make it home.  That story was “Hel’s Half Acre” by Jack Campbell and I’ve since dived into his Lost Fleet books (and enjoyed them). The story Dan Abnett contributed to Armored was “Death Reported of Last Surviving Veteran of Great War” which is an interview with a man whose life has been extended by the use of powered armour.

Regardless of my error, I greatly enjoyed Embedded. Here is my review as posted on Goodreads:

There is a quote on the cover of my copy of Embedded. SFX thinks ‘Abnett is brilliant’. I have to agree. His brilliance leaps off the page, regardless of whether you’re reading about a tired old reporter, soldiers, chicken-effect, bullets whistling over head or the sound of live rounds leaving holes in a wall. He also knows what to leave out. Anything that can be assumed is assumed. Let’s get on with the meat of the story, all right? And let’s pepper it with phrases that will be funny, even when those bullets are whistling overhead. I chuckled every time someone said they were wealthy and I got a kick out of sponsored expletives. More, though, I enjoyed the subtle effect these touches had on the story as a whole.

Great characters, solid plot and excellent page-flipping combat. I raced to the end of this one in record time. 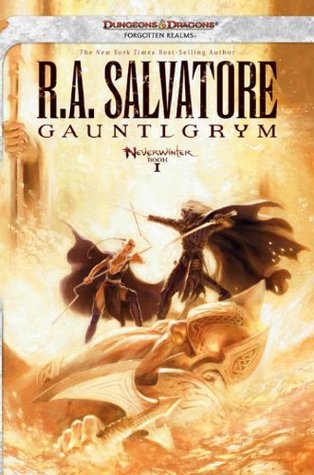 During the month of June, I finally got to Gauntlgrym by R.A. Salvatore. Gauntlgrym is the twentieth volume in the legend of Drizzt Do’Urden and the first book in the ‘Neverwinter Saga’. I had skipped ahead to read The Companions and Night of the Hunter, books one and two in the ‘Companions Codex’ (twenty-four and twenty-five in the legend), but had always intended to go back. I’m so glad I did. Despite knowing the outcome of certain plot points in advance, the book still managed to surprise me. I hadn’t been spoiled for every twist in the tale.

I didn’t review Gauntlgrym, not officially. I rated it five stars on Goodreads because I loved it. I really can’t imagine not rating one of R.A. Salvatore’s books five stars at this point. I find he is an accomplished writer whose books are easy to read. He knows his world and characters inside and out, and astounds me with his recall of people and places with every novel he churns out. And the books are just damned entertaining. Hack and slash, monsters and mayhem, friends and foes and, of course, Drizzt.

Next up (July), I’m waffling between Ship of Magic  by Robin Hobb and Sundiver by David Brin. Both are part of a series, the first of their trilogies. I’ve been in a bit of science fiction mood lately, so I can see myself picking up the Hobb first, for a bit of a change of pace. Otherwise, I’ve always got plenty to read for review, including Trial by Fire, by Charles E. Gannon Savior, by Tony Daniel and David Drake, and Sword of the Bright Lady by M.C. Planck.