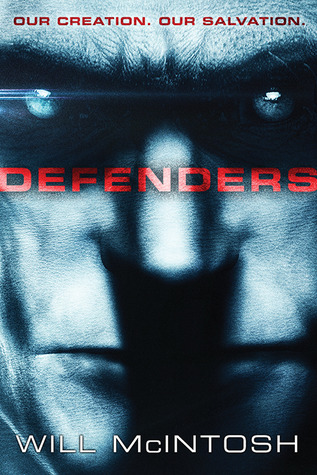 A few of my reviewing friends had very good things to say about Love Minus Eighty by Will McIntosh. So when Orbit dropped the price of McIntosh’s newest release, ‘Defenders’, to $1.99 (ebook only, courtesy of the Orbital Drop newsletter), I figured it was a good time to take the author for a test drive. It was an exhilarating ride.

Defenders is a near-future, near-apocalypse science fiction novel. The aliens have landed and they look like big, killer starfish. They call themselves Luyten. Employing weapons of gruesome destruction, they run rampant across our planet, melting ground troops into horrific lumps of gore and searing air support from the sky. If the Luyten seem to always be one step ahead of the allied forces of humanity, that’s because they are. They can read minds, which proves to be their most insidious weapon of all.

How does one fight an enemy who knows the plan in advance, who can sense the hidden and hidden agendas and can trounce any ambush? One creates a soldier with a mind that cannot be read, of course.

It is determined that the lack of serotonin in a human mind would render our thoughts inscrutable to the Luyten and so the Defenders are created. Seventeen feet tall, with three legs and detachable limbs bristling with armaments, the Defenders are engineered for one purpose: to kill. They are highly intelligent, but lack human emotional response. Apparently, that’s the cost of no serotonin. No one considers the implications of a soldier without emotions until after the Defenders win the war…and teach humanity an extreme lesson in humility.

The novel follows a handful of interrelated characters over the course of twenty years, from the depths of the Human-Luyten war forward. Scientists and soldiers, both, all caught in the tumble of events. It is the experience of each of these characters that tells the story. Lila Easterlin’s affinity and affection for the Defenders actually shows more clearly than any other perspective just how monstrous are these creations. Being the first to engage in two-way telepathic communication with the Luyten, Kai Zhou has a unique understanding of their purpose and motivations. Oliver Bowen is one of those characters who is plucked from obscurity and thrust through heroics. Dominique Wiewall created the Defenders.

Like most apocalyptic novels, Defenders is a cautionary tale and it’s not subtle in the telling, but it is extremely enjoyable in its exploration of an interesting set of ‘what ifs’. There are some obvious messages, such as a two-time examination of humanity’s tendency to shoot first and ask questions later (kill them all and let God sort them out!) and a more disturbing suggestion that even while we might ally against a superior (alien) force, we’re still a bunch of racists. The Defenders and the Luyten are both given (exiled) to Australia. Out of sight, out of mind?

As a native Australian, I did take humorous exception to the use of my country as place to put undesirables. But, as my husband pointed out, it’s not as if it hasn’t happened before. I would like to note that the displaced Australians would NOT be happy in North Dakota, however. That would be like putting a lizard in Antarctica. Honestly, I’m surprised they didn’t revolt. Then again, we can be a lazy bunch.

Then there is the examination of the Defenders, themselves, who are ultimately more alien than even the race from beyond the stars. Yet, we designed and built them. This is the heart of the story and at times shockingly brutal. I liked that McIntosh pulled no punches when it came to demonstrating our folly. At times, he managed to draw an extremely thin line between absurdity and horror and I wasn’t sure which side of the line I was on.

Defenders isn’t really an ‘All’s well that ends well’ novel, neither. By the end, the tally of losses is significant. But I don’t think the story could have been told any other way, not with the same impact. My only complaint would be that while McIntosh managed to pack a lot of story into the novel, he did skim of the more human aspects, such as the relationships between Lila and Kai and other pairings. Considering his subject, that might have been on purpose. Either way, he certainly managed to convey the fact the Defenders were not at all human. Highly recommended for fans of Science Fiction – military, near-future and otherwise and readers with a super-soldier fetish and those who enjoy a good apocalypse.

The version I reviewed had an excerpt of Love Minus Eighty at the end, which has only whet my appetite for more Will McIntosh. I’ve already bought it and plan to read it over the summer. Consider that review pending.

2 thoughts on “Review: Defenders by Will McIntosh”