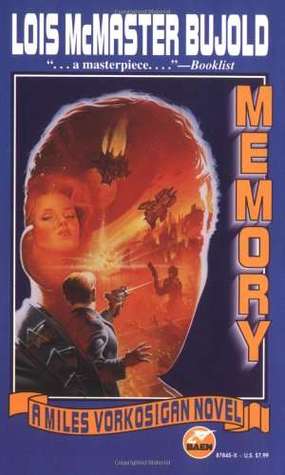 Summoned home to Barrayar to follow up on an incident where he might have accidentally cut the legs of the Imperial Courier he had just rescued, Lord Miles Vorkosigan finds that his own integrity is not the only thing awry. Simon Illyan, Chief of Imperial Security (Imp Sec) is having trouble remembering things, which should be impossible, as he was implanted with a special memory chip thirty years ago.

Illyan becomes incapacitated and is hospitalised. Paranoid to a fault, the Barrayaran Imperial Security forces suspect sabotage and, in the time honoured tradition of Imp Sec, Illyan’s successor, Lucas Haroche, is charged with solving the case of Illyan’s (perhaps) attempted murder. Due to his current state of disgrace, Miles is barred from visiting Illyan. One would think Haroche would know better than to tell Miles he cannot do something. Miles finds a way into Imp Med and onto the case and then solves it. There are a couple of twists and turns along the way, but the question of who buggered with Illyan’s implant is merely the plot of Memory 1997 book by Lois McMaster Bujold and not the whole purpose.

I fell in love with Miles Vorkosigan the moment I met him, and he is one of my favourite literary heroes. I embarked upon my Vorkosigan journey several years ago by reading the books in order of internal chronology, rather than publication. Then I skipped ahead to read CryoBurn, which halted my progress for a while. I didn’t enjoy it as much as the earlier novels. The later release of Captain Vorpatril’s Alliance cemented the ‘Vorkosigan Saga’ as perhaps my favourite space opera, however, and reminded me that I had missed certain pivotal events.

Reading a series out of order does come with the possibility of spoilers, but discovering the why of something can be as exciting as arriving somewhere unprepared, as Miles might say. In Memory, Miles’ foremost adventure is through his own psyche and he is unprepared for what he finds. As Illyan fights to remember the last five minutes, Miles trips down memory lane in pursuit of a very illusive target: himself. Recent changes in his career path leave him spinning or rather spiralling through the depths of despair. We’ve seen Miles depressed before, but not quite like this. He becomes still. Miles, still, is disturbing. Really, really disturbing! Instead of constant action, there is a lot of thought and self-examination.

I loved every minute of it. Memory covers a turning point in Miles’ life and it’s so sensitively and wonderfully done. It’s nothing short of perfect. I wept in so many places because I was so touched by both Miles’ thoughts and actions and the way Bujold handled an obviously beloved character. I also enjoyed the chance to see Illyan and Miles interacting outside of Imp Sec. The fishing trip would have to be one of my favourite scenes, ever.

Without knowing Miles as well as I do or profess to, as a fan, I might not have enjoyed this book as much. This one definitely can’t be read out of order. But, without having skipped ahead to read Captain Vorpatril’s Alliance first, I might have missed several subtleties. One of the joys of reading a series, in order or otherwise, is the in-jokes between the characters, and the author and the reader. Memory is full of such moments and they are wonderfully rewarding.

Ultimately, though, the reward for reading Memory is seeing Miles rediscover himself or the self he discarded thirteen years ago in pursuit of his alter ego, Admiral Naismith, and adventure with Dendarii Fleet. At the age of thirty, Miles Vorkosigan finally grows up but he doesn’t change all that much. He simply accepts himself, all of himself, and he is still Miles. He still has a whole life ahead of him.

As he says toward the end of the book, ‘I am unprecedented.’

His father makes the only proper reply, ‘This is not news, Miles.’

One thought on “Review: Memory (A Miles Vorkosigan Novel) by Lois McMaster Bujold”