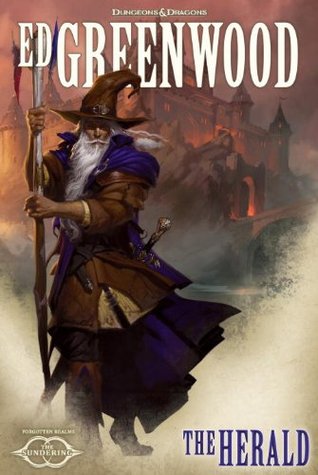 This is it; we’re at the end of a long road. We are at ‘The Sundering’. Set during the Era of Upheaval, ‘The Sundering’ is a multi-author event chronicling the adventures of Faerûn’s heroes, from those just Chosen to some of the Realms most enduring characters. The Herald, by Ed Greenwood, rounds out the series with a battle to end all battles. Actually, make that battles to end all battle. Or something like that. There’s a lot of combat in this one.

Elminster and Storm Silverhand, Chosen of Mystra, are rebuilding the Weave. They are interrupted by agents of the Shadovar (of course) and choose a new, more important mission. The wards of Candlekeep and Myth Drannor must be preserved. The pair split into two teams, El heading off by himself, Storm in the company of Amarune Whitewave and Arclath Delcastle.

The gang’s not all here, yet.

At Candlekeep, everyone is in disguise. Moving from dusty tome to dusty tome, monks who might not be monks eye one another suspiciously. If it wasn’t so serious a moment, one might giggle. (I did, just quickly.) At Myth Drannor, it’s straight to battle. No disguise, lots of hack and slash.

As the battles progress, purposes change and become compromised. Rebuilding the Weave becomes secondary to keeping the Wards out of Shadovar hands. Elminsiter is sorely tested, facing betrayal, action against old allies and a possible alliance with an enemy. Storm and her magical hair has no time to catch her breath. It’s battle after battle outside Myth Drannor, which makes for fun reading if you like that kind of thing. I do.

It’s hard to summarise the rest of the book without giving away some of the most wrenching and startling moments, except to say that lots of folks meet their end, gruesomely. For a while, El’s every chapter ends with a roof tumbling down on top of him. Oh and I learned my new favourite spell: Bone Rend. I think Ed Greenwood made it up just for this book. It’s spectacularly gory; the bones are pulled from a body, while that body lives. The end result is, well, quite bloody. The bones hold a lot of organs and musculature in place.

I’m not going to say much about the ending of ‘The Herald’, neither, except to note that ‘The Sundering’ happens, ready or not. Hopefully, the event’s passing means a time of renewal for Toril. It could sure use it.

I did find The Herald to be the least accessible of all the Sundering books. There are so many characters and points of view and little time is taken to fully introduce every player. If you have not read Ed Greenwood before and are unfamiliar with Elminster (as I was), it’s a little difficult to immerse. There is a lot to take on faith. This is somewhat understandable, really. It’s the final battle. There isn’t the time for leisurely introductions. I did warm to the main characters and I did come to care for their fates. They are written with great empathy. A solid familiarity with the world and the setting and the event itself does smooth many of the wrinkles. There were also other familiar characters in the mix, which made for a nice cross-over in my mind.

So, that’s it, ‘The Sundering’ is done. In my opinion, it was a wonderful enterprise. I got to meet many of Faerûn’s iconic characters and experience the writing style of several new authors. I added many new books to my shelf and plan to continue to dwell in the Realms for some time. Now I’ll be looking at the follow-up novels that tie into this series. I’ve already read one: ‘Night Of The Hunter’ by R.A. Salvatore. Really, the stories will never end, which is great news for fans and those just discovering this world.