I Can Quit At Any Time

One day last week (not sure which, it’s all a bit of a blur), I was nestled on the couch with a blanket and a couple of cats. Too tired to read and having watched enough television to numb certain parts of my brain, I was playing solitaire on my Kindle. Though it makes little sense to play a game of logic when I’m tired, I often play solitaire in the evenings. I find it just engaging enough but just bland enough to fill in the hour I should wait before surrendering to sleep. (Going to bed too early means I get up too early and that’s an unaccountably vicious cycle.)

An ad popped up for a game called Klondike and I figured what the heck, I’d download it and give it a try. It looked even more mindless than solitaire but prettier.

The game started up with lots of easy to follow instructions. Buy some chickens, plant some wheat, and chop through these bushes to reveal hidden treasures! The juxtaposition of farming and exploring didn’t really make sense to me? Nor did having to rescue people and fix someone’s boat, but the game was telling me what to do, meaning I didn’t have to think, so I went along with it.

Worse, I played with breakfast the following morning. Tiredly. Doggedly. I’d accepted a challenge to cut down twelve sequoias in ten hours and waiting on the energy bar to refill between each effort was killing me.

I put the game aside to get some work done and managed to write backward, meaning I ended up with fewer words on my current WIP than I started with. I edited. Cut. Didn’t replace. Then I completely messed up another project by editing the incorrect file. I save daily and every version is dated. It’s a stupid mistake to make, but I was tired. Also, I needed to make bricks to complete the dairy and to make bricks I needed mortar and to make mortar I needed cement and to make cement I needed gravel. Gravel came from crushed up rocks and I couldn’t spare the energy to mine those rocks when I’d accepted a challenge to cut down these all these trees.

I went to bed early but took my Kindle with me, and in between chapters of I Don’t Know What I’m Reading Right Now I cut down trees, collected milk and eggs, and finally repaired the crusty old sea barnacle’s ship. Off we sailed to a new land! 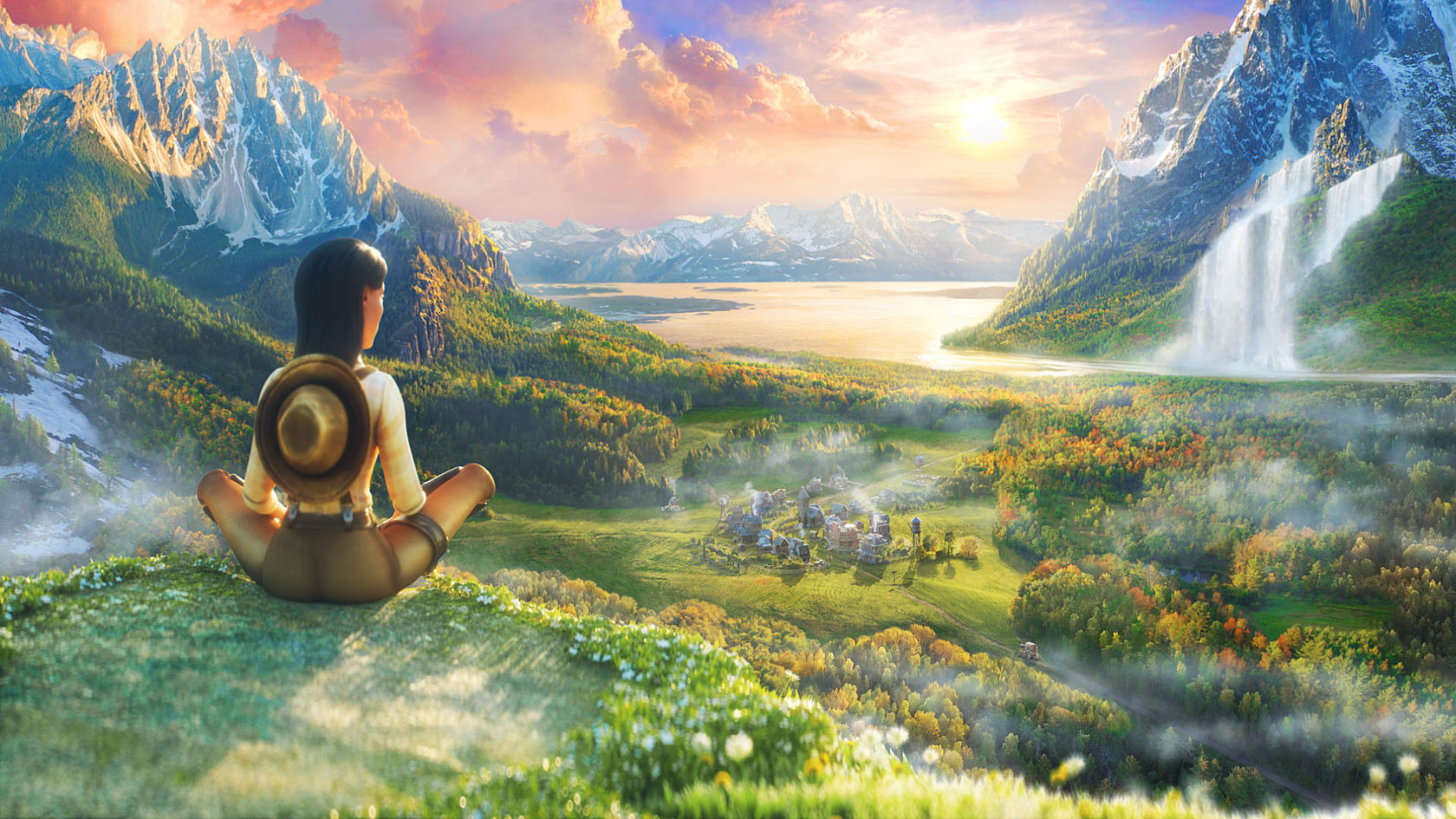 It was kind of embarrassing to be caught playing the game by my husband when he returned to the house on Friday afternoon—after having seen me playing it at breakfast. I did take pains to point out that I’d not only written a full chapter, but had fixed my editing snafu, done all the laundry, mowed the lawn, cleaned two bathrooms, mopped and swept everything, and tidied another corner of our daughter’s bedroom. (She’s away at college and reclaiming that room is something like accepting a challenge to fell three hundred trees. The dust, omg, the dust. And the old plates under the bed. And the shoeboxes full of things. But that’s another blog post.)

We went out to see a movie and as I watched, I prepared strategies for optimizing my energy use in the game. To my credit, I didn’t campaign to return home early in order to complete another challenge by the deadline instead of getting dinner out. I Like pho. I am also an experienced gamer, after all. I’m used to not getting every achievement.

I’m not used to being able to take my games to bed with me. I Klondiked into the wee hours, even going so far as to log in and check my energy bar, mine a few things, and queue up some production (can you believe it takes twenty minutes to grow strawberries? I can clear a field of wheat in just three) after visiting the loo at two in the morning. I know. I KNOW.

At breakfast on Saturday, I told my husband, “I can quit at any time!”

On Saturday afternoon, he surprised me with a plan to visit the corn maze we both loved and visited every year, with maybe dinner out afterward. The deadline for mining quartz would expire while we were out, but I couldn’t say no, could I?

I told myself I wouldn’t take my tablet to bed, but my current book was on it, so I sort of had to. Right? Right! I flipped tabs between Klondike and the book for about twenty minutes before giving up on reading and just farming. Mining. Manufacturing. Browsing upcoming challenges. I dreamed of farming and mining and manufacturing, and the weird little candy swap game you play to get more energy.

When I woke up on Sunday, I took my tablet downstairs, deleted the game, and read my book for an hour.

I didn’t even hesitate, even though I wasn’t quite aware of having made a conscious decision to delete the game (without even opening it). The evening before, I’d completed a five-day challenge and received a reward and a promise that the reward would be even bigger when I got to the twenty-day mark. I really wanted to see what that reward would be! But on Sunday morning, I didn’t care. Likely, it would have been just enough energy to complete roughly twenty percent of the next mining/farming/manufacturing challenge and no more. It would have been enough XP to take me to the next level and another host of challenges. More lands, more people who inexplicably needed rescuing, and maybe this time we’d be looking for mustard pots for the mustard pot set which I could exchange for hot dogs and I don’t know what the hot dogs would have done for me, but I’d probably hope they were for energy.

I enjoyed Sunday. I played Assassin’s Creed: Odyssey and Borderlands 3. I watched a movie and saw the whole thing because I didn’t have my tablet with me, or a reason not to pay attention. I went out to lunch with friends and didn’t check the time once. I cooked dinner when I got home. (Okay, yes, we’d been eating canned soup and banana and peanut butter sandwiches, but I’m pretty sure that wouldn’t have lasted forever!)

Not once did I miss Klondike. I haven’t even played solitaire since. But I have been thinking about what it is about games that grab and hold our attention and why some games keep me and others don’t.

The first time I stayed up all night playing a game was Sim City in 199-something. I stayed glued to the PC for thirty-six hours muttering, “One more year. Just one more year.”

My propensity for mindless additions probably goes back as Asteroids, though. We had an Atari and if my dad wanted me to do anything on a Saturday, he’d have to pull the plug at the wall socket. I can still remember the shock of having that happen. The blank screen and not having anywhere to direct all the energy pent up in my entire body as I leaned forward over the joystick.

I call myself a recovering WoW addict. I played for five years, taking a break of three months only to get lost in Civ V. I never played any of those games through the night, though. I had a child by then and I was pretty fierce about putting family time before game time. I sacrificed other hobbies to the gaming gods in those years, reading very little and falling way behind on popular TV.

I never went back to World of Warcraft, even when my husband did. Once I quit, I stayed quit. I still play Sim City and The Sims often enough, but it’s usually when I’m looking for what I briefly found in Klondike. Something to do with a restless mind. An activity that swapped achievement for very little thought. No story to consider, no role to play, just a reorganizing of objects in order to reach goals. It’s no wonder I enjoy jigsaw puzzles and can often be found leaning over the same puzzle morning, noon, and night while listing all the other stuff I did that day to anyone who looks at me sideways.

There is a need for these types of activities—the sorts of games that challenge only just enough to entice, but let you win pretty easily. Because you’re tired and you really want enough points to build a cottage by the sea. (Also, you need more workers to farm all this stuff.)

But while I’m happy to pay sixty bucks to play Assassin’s Creed, I’ve never succumbed to the lure of microtransaction in puzzle games. I know I’m going to get at least 120 hours of playtime my first time through Assassin’s Creed and that the experience will probably wow me. I love these games. I love the worlds, I love a perfect assassination! But I’m not going to spend $3.99 on a welcome pack of energy and emeralds (that can be swapped for energy) just so I can farm more wheat and collect more milk. Why? It’s only four bucks. I’ve played Klondike for close to twenty hours in five days. (I know. I KNOW!)

I think the issue is that while I enjoy both puzzling and gaming, I have certain expectations for each. A puzzle is something to occupy my mind when I’m still buzzing, but not ready to commit to something else, like sleep. More, though, puzzles don’t tell stories. What I get out of a game like Assassin’s Creed is story. It’s what I look for, too. And if I quit a game early (Andromeda, for instance), it’s usually because it’s more a list of tasks for the same old rewards than an involved narrative. There are only so many times a game can send you after wolf pelts before you’re done, and ultimately, that’s why I quit World of Warcraft as well. I got up one morning and logged in to complete my dailies and was suddenly hit with a wave of inertia. Why was I doing this? So I’d be properly equipped for the raid that night, of course. But why was I doing that? So I’d be even better equipped for the next night’s raid—and I’d have to set my alarm to get up even earlier tomorrow because I needed to fish for elementals before I did my dailies and be done by the time my daughter got up for school.

No wonder I quit.

I already have a job. Several, in fact.

And gaming, for me, has always been about losing myself in another world for a while. Kind of like reading. Somewhere to visit and return from. Not a place where I want to live. So, no more Klondiking at three in the morning for me. Not at the moment, anyway. But, hey, as long as I use a tablet to read and get tired and easily distracted, no promises. What I can guarantee, however, is that my next silly gaming addiction will probably only last about as long as this one.

At least I hope it does… 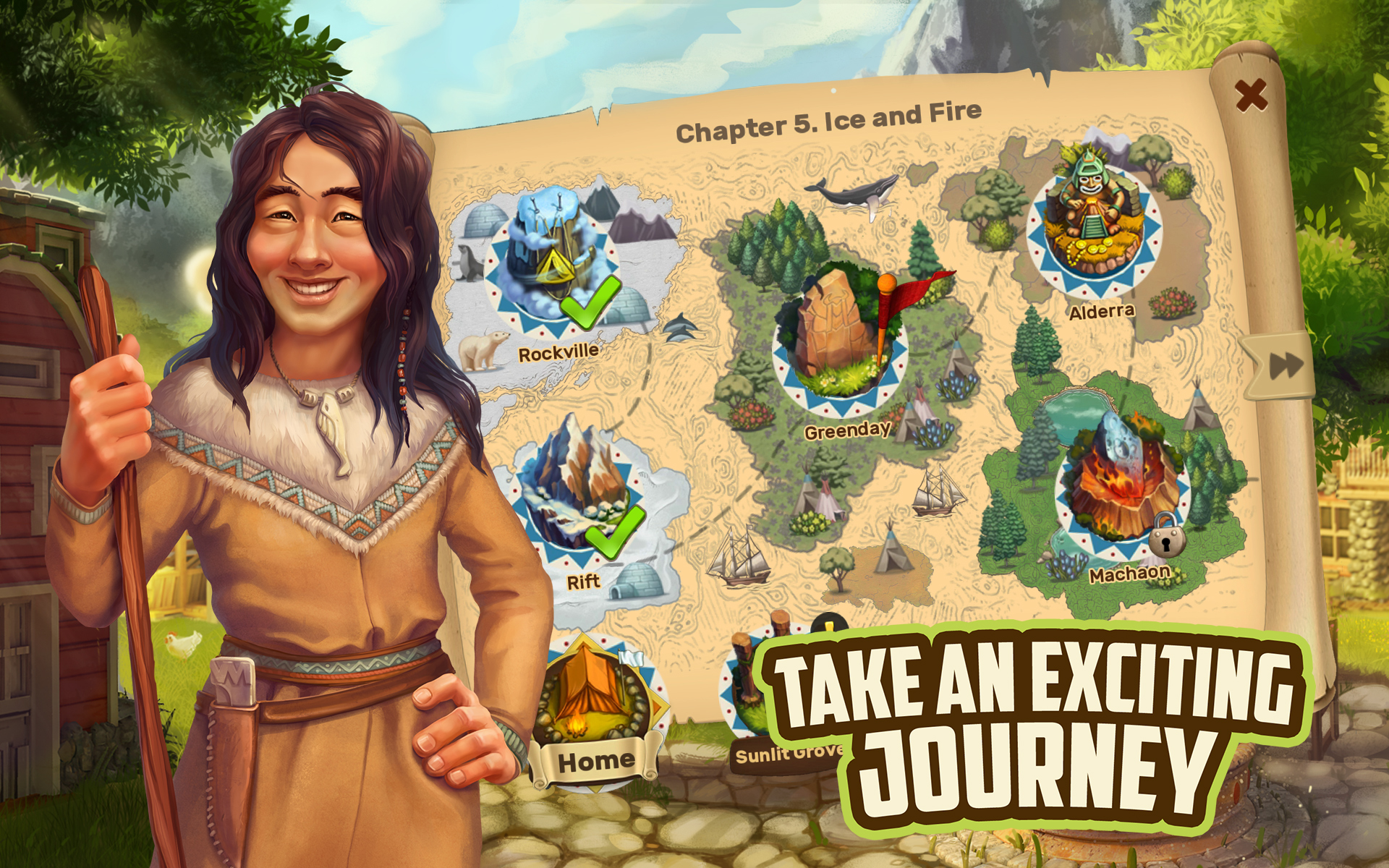 In grabbing some images for the game (from the Klondike website), I discovered I could download it on PC. And that there were twelve maps, meaning eleven I hadn’t visited. I’ll admit I was tempted.

So far, I have resisted. I really want to finish my current WIP. Also, I can only eat so many peanut butter and banana sandwiches.