When we built this house nearly thirteen years ago, we planned to use the front room, what regular folk might call a formal sitting room, as a library. We even thought we might put a piano in there one day. We were pretty broke after moving into our brand spanking new house, though, and had to consider things like cooking pots, washing machines, and the mudslide that was the backyard.

I had a few old bookcases I’d bought in Texas, so we lined those up along one wall, threw down a rug, and put in a craft table and chairs for my daughter and the neighborhood kids I babysat every afternoon to use for homework and projects.

I was keeping books in there, but it wasn’t much of a library. The guitar collecting dust in the corner didn’t really do much for the atmosphere, either. Eventually, we moved the craft table to the basement and I bought a few more bookcases. They weren’t an exact match for the ones I’m brought up from Texas, but sort of close.

Then the cats moved in. I’m not sure when they acquired so many toys, but the fact we needed an entire room for their possessions clearly points to their residential status.

You could say it’s a hobby, but sometimes it feels more like an obsession. I volunteer at my local library, sorting book donations for the annual sale. We receive tens of thousands of books a year and most of them pass through my hands. It’s not unusual for me to have made a pile of three or four I’d like to take home about five minutes after I’ve arrived and started sorting. I also used to review books for several publications and I’m still on the list for a lot of publishers. So, sometimes books just turn up in my mailbox. Then there are the books I preorder—the signed, hardcover editions from my favourite authors. The books I buy after I’ve either read the ebook version or listened to on audio—the keepers that need a spot on my shelves. The select few I’ve carried from country to country, house to house. The ones I’ve kept from childhood. The books that wander in unannounced. The ones that breed, quietly in the dark.

I own a lot of books—about two thousand at last count. That was this morning, and doesn’t include the two new keepers I just ordered from eBay. Or my burgeoning collection of ebooks, of which there were over a thousand early last year. Thankfully, I don’t have to shelve those.

What I wanted was a nice space to put them in, and, objectively, the front room was not… nice. Looking at the photos of now versus then, I can’t believe I ever thought it looked merely okay.

As many wonderful projects do, ours started with a trip to IKEA. We did consider hiring someone to build really nice shelves with cabinets down below, glass doors for the older, crumblier tomes, and a nifty ladder. Maybe some lights. But we have a child to put through college, and we’re still collecting cats, so IKEA it was! I selected the Billy Bookcase, with which I have a fond history. My dad is still using the Billys we bought yonks ago. Like, eons. Maybe forty years? They still look good. After careful consideration, I chose the black-brown shelves, hoping they’d compliment our cherry hardwood floors.

Our first trip (we’d only planned one), ended with us struggling to fit about half the shelves I wanted into the back of our Durango, along with about $500 worth of other “stuff” we’d picked during our tour of the store. Being limited to only half of the shelves I needed turned out to be a good thing, as it gave me a chance to measure the space again, fiddle with the configuration, and make a good plan for how we were going to deal with the HVAC intake vent and thermostat thoughtfully placed in the middle of one of the walls.

I built the first batch and then emptied several of the old shelves in preparation for the new. The sight of a good portion of my books on the floor was kind of shocking. Like, the old shelves had been crowded, but seeing all of the stacks of the floor made a greater impact. There were a LOT of books.

I had resolved to sort them a little as I re-shelved, slotting fiction in with the science fiction for one long wall of delightful neighbours. I managed to part with, um, ten books. In my defense, I have gone through these shelves before, tossing books I don’t feel super connected to. So, yeah.

Then it was back to IKEA for the second batch of shelves. Another Durango load, and, mysteriously, another $500 worth of extra crap. I’m really glad our closest IKEA is over an hour away. It’s more dangerous than Target.

I finally finished building the shelves last Thursday and completed the shelving about a day later, teaching myself the Dewey Decimal System for the non-fiction section. I reserved one of the cubby shaped holes for my vinyl collection, and used another of the narrower bookcases for board games, all of which had previously been sorted in that room. We put together the two easy chairs we’d picked up at IKEA (they were right there, okay? And on sale), and I contributed a pillow I’d bought ages ago, apparently knowing I’d need something blue and tentacly one day. Eventually, I’d like to get a nice rug for the floor and maybe a puzzle table near the window. The piano is permanently on hold. A) We have no room for it and B) we already have too many hobbies, including the one called work. Maybe after we retire, as something to do between naps.

I had hoped to move some of the books from the denial shelves (the TBR piles shelved in our guest bedroom) downstairs. And the books from the teeming piles behind my desk. I had thought I could shelve my own books upstairs, and my writing reference books. The stack of game boxes leaning against the wall. As it turns out, once I unstacked every old shelf, all of the double and triple layers, I didn’t even have room on the new shelves for every book that had originally been in that room. Crazy, right? Who knew!

I’m absolutely thrilled with how the room turned out, though. It looks amazing and I find myself stopping just to stare nearly every time I walk past. I love seeing all of my books on display—the blend of colours and shapes, and all of the memories. I’ve always been in the habit of visiting with my books. I don’t just collect them; I commune with them, often. Now, I can sit in the library and read as well. Take my notebook in there, recline with a view across the front lawn, and dream up new stories of my own. Indulge in a nap.

Of course, the cats still think the room is theirs, so I might have to fight them for a seat on occasion. 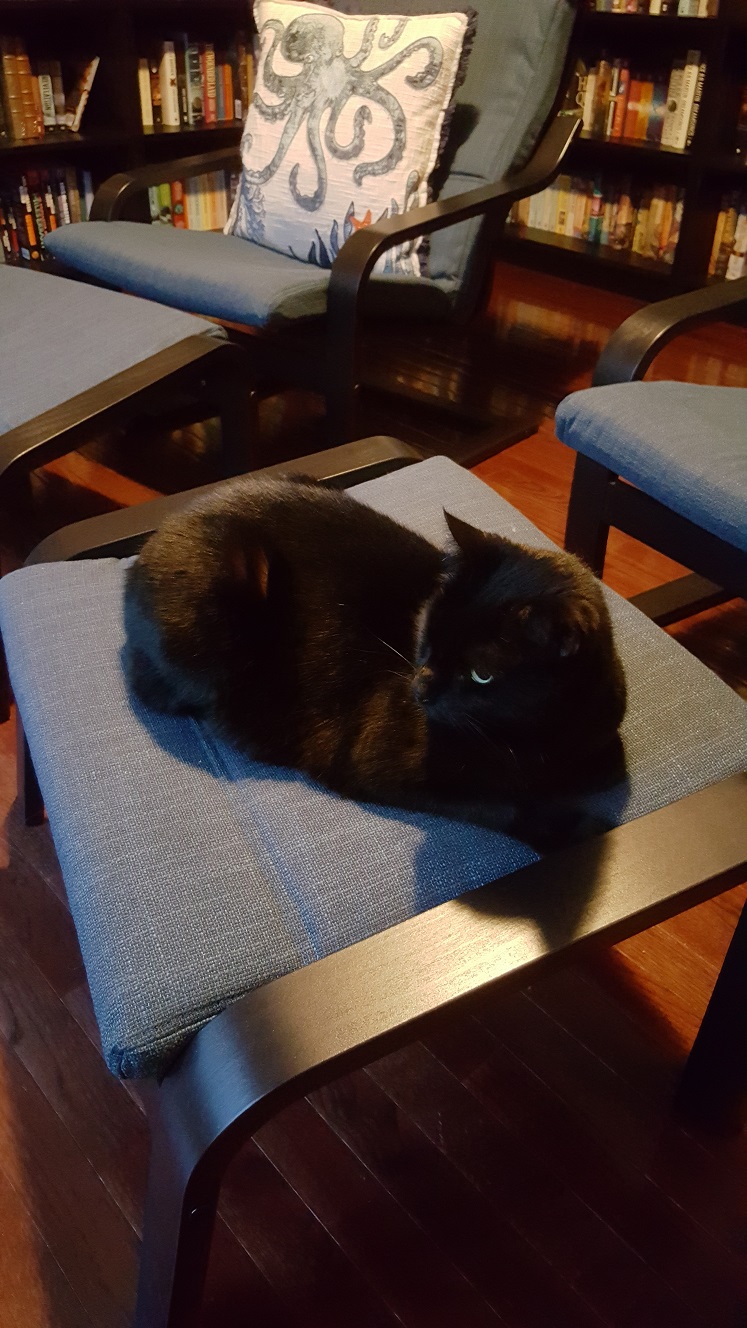 The full project, from start to finish: 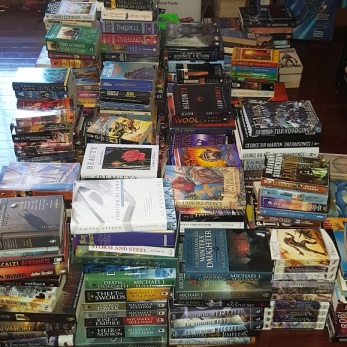 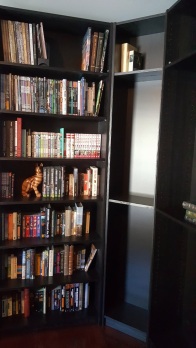 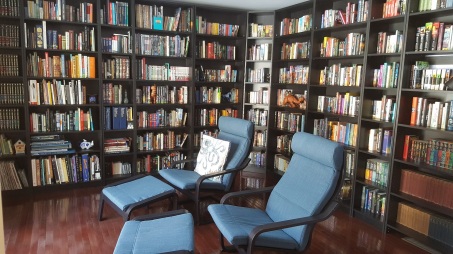 9 thoughts on “The Library Project”