You’d be forgiven for thinking this post might be about our husbands, our brothers, or our sons, but my fellow Lady Writers and I want to share a little something about the other men in our lives: the characters we write. Each of us picked a favorite, and it was no easy task. We’ve all written multiple novels and have been a part of many characters’ lives. But there are always standouts, those characters you come to love above all others. Here are ours. 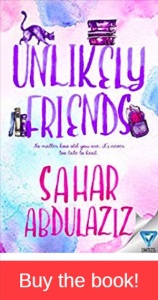 The Two Men in My Make-Believe Life
Sahar Abdulaziz

I’ve written quite a few male characters to date. Some have been devious, sneaky… sociopathic… evil, and, well, frankly, off-the-wall-nuts. On the other hand, I have also written brave, loving, considerate, loyal, charming male characters that can make one’s heart throb and soul ache. However, if I’m being totally honest, my most favorite male characters of all time have got to be Melvin Vine, from my book, The Gatekeeper’s Notebook [2019 release] and Irwin Abernathy from my novel, Unlikely Friends, [Feb/2019 release]. In-love doesn’t nearly come close to describing how I feel about these two.

Melvin is a man on the spectrum whose artistic talent is beyond genius. He is awe-inspiring, kind, a steadfast and loyal friend with a heart that knows no evil. Despite the curveball’s life has thrown him and the cruel people he’s had to endure, he’s never stopped being the compassionate and insightful man more people need to become.

And then there’s Irwin Abernathy, my grouchy, cranky librarian who would rather be knee-deep in a good book than surrounded by people… any people. No peopling. Irwin is what I would describe as a social introvert. A curmudgeon. He finds humans an unnecessary distraction. However, here’s the thing about Irwin than I find so appealing. He’s authentic. A man of his word. What you see is what you get. He doesn’t superimpose judgment, but when faced with hardship, he stands true and loyal, refusing to back down. He’s the guy who will move mountains to do the right thing [albeit grumbling under his breath the entire time].

Despite Irwin’s grumpy demeanor, and Melvin’s over-trusting persona, they are the kind of friends that everyone needs, but not many deserve.

Author of The Broken Half, As One Door Closes, Secrets That Find Us, But You LOOK Just Fine, Tight Rope, Expendable, as well as the upcoming novel, Unlikely Friends, Abdulaziz again demonstrates that those who have suffered abuse are not victims, but survivors. 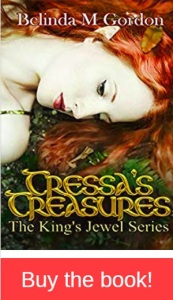 The King’s Jewel Series is full of interesting male characters, both human and fae. But to select one to tell his story makes for an obvious choice. Of course, I’m talking about the saga’s leading man, Alexander Mannus.

Alexander (Xander) has been through a lot in his life.

His mother disappeared when he was 7 years old leaving him and his brokenhearted father with nothing but unanswered questions. In her absence, Alexander obsessed over the unusual gemstone she had left behind. Studying geology became his passion.

Alexander became an officer in the US Marines, respected by his men for his fierce might-for-right attitude and his odd sixth sense. An IED abruptly put an end to his military career and left his right arm and hand nearly useless.

While recuperating at Walter Reed Medical Center, Alexander married. A year later his young wife died in a car accident, leaving him to raise his infant daughter, Sophia, alone. He became slow to trust and protective of his loved ones—ever fearful of losing them.

He spent years wandering the globe with his daughter and his best friend mining gemstones, yet he never found any that matched his mother’s. Until one day he received a letter from an elderly woman in the Pocono Mountains….

Belinda M Gordon was born and raised in Pennsylvania and currently lives in the Pocono Mountains wonderfully supportive husband and a crazy dog named Max. She is of Irish heritage, which is how she became interested in Celtic Mythology. She used the Celtic Mythology, specifically of Ireland, as the starting point of her Romance/Fantasy series, The King’s Jewel. 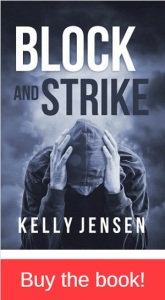 Most of my leads are male, so choosing just one to highlight has been a challenge. I’ve enjoyed writing all of my guys, from creating their backstory to watching them grow on the page. Learning from them as they face challenges, crying as their hearts break, sighing with deep contentment as they find a happy ever after—with a partner, but also with themselves.

In the end, I decided to write about Max from Block and Strike. Max is one of my youngest leads at only twenty-two, but his growth on the page far outstrips anyone else I’ve written. I think I fell in love with Max when, during a critical scene in the book, he didn’t react the way I’d expected him to. Instead of running from a certain conflict (as outlined), he turned around and stood his ground.

As a writer, this was a pretty pivotal moment. I hadn’t had a character do this before. Max’s love interest, Jake, had proved a little ornery, but was mostly following my outline (except for nixing my entire first chapter and telling me where I should start the book). But Max had been following the program, and it was about then that it clicked for me that I was writing something more than a simple romance—I was writing the story of Max’s becoming. Over the course of the novel, he would grow and change into the man he wanted to be and it was kind of beautiful. So I let him stand his ground in that scene. I watched with pride as he conquered the rest of the story, not only allowing himself to trust and fall in love, but to become strong and self-reliant.

From Max I learned that all of my characters have lives of their own and that if I listen to them, they’ll tell me their stories. All I have to do is write them. Since then, I’ve fallen in love with every character I write, because I always remember how Max taught me to craft a better novel.

Kelly is the author of eleven novels–including the Chaos Station series, co-written with Jenn Burke–and several novellas and short stories. Some of what she writes is speculative in nature, but mostly it’s just about a guy losing his socks and/or burning dinner. Because life isn’t all conquering aliens and mountain peaks. Sometimes finding a happy ever after is all the adventure we need. 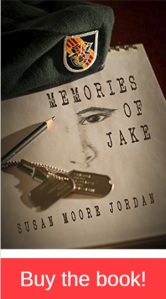 This was really a no-brainer: my favorite male characters are Andrew and Jacob Cameron, brothers I followed through two books, Memories of Jake and Man with No Yesterdays. The books cover a period of many years, from 1954 to 1992. From a traumatic childhood experience to high school and college, and then into the Vietnam War and its aftermath. One or both of them experienced every phase of the Vietnam War, from the Gulf of Tonkin Resolution to the fall of Saigon. And beyond the war, Andrew visited the Wall. Jake spent time with Vietnam vets who couldn’t get their minds back into being home.

Yet throughout all this, they strove to find a way to lead happy and productive lives. The love between them was stronger than time and space, and until they were together, the walls between them obliterated, that happiness couldn’t be complete. Andrew and Jake took me on a difficult, sometimes painful, often uplifting journey. The art and music in their lives became a lifeline for each of them in different ways. Jake, the adventurer, followed a path that became a physical odyssey as well as an emotional one, and his new-found love of music eventually brought him happiness. Andrew, the homebody, used his talent as a gifted painter to conquer the trauma of his war experience and to connect more completely with the people he loved most.

Andrew and Jake Cameron. Each of them walked through fire and emerged renewed.

Jordan attended the College-Conservatory of Music in Cincinnati and moved to the Pocono Mountains in Pennsylvania in 1971 with her late husband and three young children, where she established a private voice studio and directed local community and high school musical theater productions. Since 2013 she has been writing novels combing her experiences of tragedy to triumph and her love of music, including “companion” novels, Memories of Jake and Man with No Yesterdays, released in March and November of 2017.