I’ve wanted to own a Ford Mustang for about as long as I can remember. Last year I finally bought one… and it’s the most impractical car I’ve ever owned. But I love it all the more for that fact.

I saved for several years in order to purchase my dream car and planned to buy it on or around my 50th birthday. My dad would be visiting then and I figured shopping for a car together would be something fun to do. We’re both pretty interested in cars: we both used to race (in amateur leagues), can talk about tires, and will turn our heads at the sound of a particularly nice engine burble.

I started shopping in about October 2017, cruising local dealerships and Ford’s certified pre-owned website for something about two years old with low mileage. Why buy new when I could save about ten grand by getting a gently driven model with a similar warranty? I knew I was buying a somewhat impractical car, so I figured I could be logical about the purchase.

Then came the question of where to put it. We already owned two cars and our house came equipped with two garages—which we actually do use to shelter the cars. No towers of boxes or piles of old furniture for us! (That’s all in the basement. Thank God we have a basement.)

We decided we should build a third garage. My Mustang definitely needed to be garaged and my older Toyota wouldn’t last much longer if it had to live outside, and the Durango is our all-weather car. It needed to be inside and ready to go. So, a third garage. Practical, right?

We came up with several plans for the thing, a number of which included adding the garage as an extension to the house.

“We’ll bump out the far wall of our bedroom and add a decent bathroom and a proper walk-in closet!”

“I could have an actual office up there. With a door that closes!”

“We could do a little patio, too. Overlooking, the… swamp.”

“Maybe not a patio.”

“What if we put that here, and then we could put a sunroom by the kitchen, and bump out the…”

You get the idea. We contacted a few builders and got all excited about the plans to renovate. All so we could buy a car. Then the estimates started rolling in and we decided to build a freestanding garage next to the house instead. It’s a shed. A very large, very nice shed with one and a half garage doors, plenty of room for the Durango and all of the requirements of suburbia: lawn mower, leaf blower, snow blower, weed whacker, chainsaw, shelves full of inert fertilizer, boots none of us remember buying, tubs full of rotting sports equipment, and at least one paint can from every room in the house. And a few boxes, and one piece of broken furniture.

We finalized the plans for the new garage about a month before my 50th birthday. Then it started to rain and rained about every day for four months. You can’t dig a foundation in the rain—not when the lower corner of it is pretty much part of the swamp. The official designation is wetlands and it’s nice having twelve acres of wetlands as our back yard. Not so much when you want to dig a hole in part of it.

The garage was completed in September 2018 and I started car shopping. I was still looking for a trusty second-hand vehicle with low miles and a great warranty. Then I found a new one at a local dealership in a colour I hadn’t seen before: royal crimson. I ran the numbers. Taking into account a few Ifs, I could afford it. Just. But buying a new car was so impractical! I’d be just fine with a used one. I could get more features with a used one. I wouldn’t be as paranoid about scratching the paint on a used on.

Before I could convince myself to buy it, the car disappeared from the dealer’s inventory. That was the universe telling me I had made the right decision.

Finally the weekend we’d put aside to Buy Kelly’s Mustang arrived. We visited a local dealer and asked to see their preowned selection. It was two cars, both of them older than I wanted, one with a soft top. My list of wants and needs was fairly small: I wanted a V8. I wanted a manual transmission. I wanted the fastback body. I live in northeast Pennsylvania. It rains a lot here. It snows. And I have hair. We figured we’d make the trip worthwhile by at least taking one of the new models out for a test drive.

You know those moments in life that make up a very special album? Your first apartment, meeting The One, meeting The One Who’s Actually Meant to Be, seeing your kid smile for the first time, and actually having a complicated dessert turn out just like the picture on Pinterest. Add pushing the start button on a V8 Mustang to that list. Oh, the sound. The rumble, the roar, the vibration through the seat. It’s… amazing. It was everything I hoped it would be.

Then I drove the thing. My test drive was fairly sedate because while I already acknowledged that a Mustang wasn’t a terrible practical car, I did want to know how it would feel as an everyday sort of car. Something I could drive to the store and back. As you can imagine, the car handled beautifully. It was a dream to drive.

The dealer, of course, wanted to know if I’d be interested in buying it. I was, but not that particular car. It was white and just… white. I wanted royal crimson. Or a dark grey, like the $50K super upgraded model parked next to it. But I didn’t have $50k and I couldn’t afford that loan, so we talked second hand again.

Then we found a new one. V8. Manual. Royal Crimson. 600 miles away. In my price range. Our salesman all but got down on one knee to offer it to me and I said yes. Then I had a panic attack. I was about to spend what amounted to a year of my daughter’s college tuition on a car. Money that many people would consider an annual salary. I could feed hundreds with this money. Clothe people. Educate them. Yes, I’d saved for years for just this moment, but what if it was wrong. What if…

And I hadn’t driven a Charger

Did I forget to mention that part? Every time I looked online for a Mustang, I’d check out comparable cars that were more practical. The Charger has an all-wheel-drive option, which would be great for the snow and rain and hills. And it’s a pretty mean looking vehicle. Predatory. Then there are those smaller SUVs that would make so much sense when I’m carting boxes of books from the library to storage. Or broken furniture to the hard waste collection. Or, just, you know, grocery shopping. Did I really need a V8 engine? The cost of gasoline would be ridiculous. Especially with all these hills.

Did I really need a new car? I loved—still love my Toyota. I’ve had it for fifteen years. She’s been a truly faithful partner and the idea of not driving her anymore made me more than a little sad. Thankfully, she’d remain a part of the family—as my daughter’s first car.

So, anyway, after sweating it out (literally) for five days, I got a call from the dealership. They had my car and it was beautiful. When did I want to come to pick it up?

Max (the Mustang) is a beautiful car. The colour is almost shocking in its allure and I think I’m the only person in 600 miles driving one just like this. Everyone in town knows it’s me. I park him at the end of every lot, away from all possible door dings and spend every minute in every store paranoid that some teenage hooligan is going to run a key along his glossy side.

Getting into the car is a bit like making yourself into human origami. You have to fold in the middle, with your legs one way and your arms another.

I’m only just tall enough to see over the wheel comfortably and the bulge of the hood (housing those glorious eight cylinders) is so high that I pretty much just have to trust the road is there, where it should be when I crest certain hills.

No one older than five can comfortably sit in the back seat and I’ve stopped tossing my purse in there because I did something to my neck contorting myself to get it out. Likewise, I can’t fit my bag of books back there without shifting the seat.

My travel tea mug doesn’t fit in the cup holder.

I get one mile per gallon.

It doesn’t fit through the drive-through lane at the bank.

I can’t drive it when it’s raining because the angle of the back window is so acute that it’s constantly awash in water making visibility very, very bad. Also, the car is somewhat low-slung and we get a lot of water on the roads when it’s raining.

I can’t drive it in the snow. There’s a setting for it, for the traction, but… no.

The seat belt is so far back that I nearly put my neck out the other way reaching for it and pulling it over my shoulder.

Every time I push the start button, every impracticality fades beneath the burble of eight cylinders doing their thing. I could sit and listen to the engine for hours. I’ve actually turned the music down on occasion to do just that as I’m winging around the tight corners.

Max is so much fun to drive. The way he clings to corners and leaps up hills. The sound of the engine when I change gears, the roar up and down. The feel of the wheels on the road. The suspension. The fun extras like the fact the speedometer is labeled Ground Speed and when I open the door, the word Mustang lights up on the jamb, reminding me every time I fold myself in half, legs one way, arms another, that my car is special.

I could write another post, longer than this one, about the times I’ve chosen the practical direction. I’m a plotter and a planner. I save my pennies, buy everything on sale, and hate spending money. I plan our weekly menus around one main ingredient. (This week it’s sweet potatoes.) I’m not allowed to book family vacations because no one wants to go on practical holidays.

I require advance notice in triplicate of any change of plans.

I love my car and despite the fact I still fret about spending so much money on one frivolous thing, I’m glad I bought it. I worked hard for that money. My husband and I both did. And when I’m out driving, or just visiting Max in the garage, I’m happy in a way that’s difficult to describe.

I guess the closest I can get is to say it’s probably the feeling you get when you finally realize a dream. One long-held, one planned for, one you really didn’t think would actually happen.

And the fact that it ’s not practical or sensible only makes it more magical.

(At some point, I’ll stop talking about my new car. At some point. In the meantime, here’s another picture!) 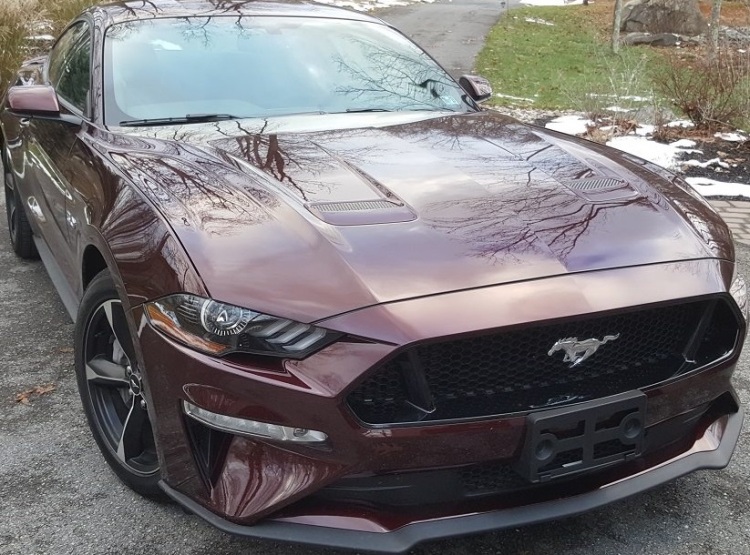