How is it October already? Just last week (in August), I was thinking to myself: “You need to do another reading post.” I made a note in my planner and… turned the page. As always, I’ve been reading lots of awesome books, though. And, as always, I want to share the most awesome ones with you.

The art caught my eye on this one. It’s an interesting style—less “comic” and more “fine art,” with swift lines and watercolour shades. It reminded me of another of my favourite comics, East of West, and it’s just as good. The story starts simply: ten years ago, giant harvester robots swept through the galaxy leaving destroyed cities, dead bodies, and terror in their wake. Since then, even the simplest robots have become enemy number one and hunting them down has given rise to an entire guild of scrappers who hunt rogue bots with the enthusiasm of bounty collectors.

The remaining robots have formed a resistance, and when a small companion robot—a boy, really—named Tim 21 reactivates after a ten-year sleep, everyone wants a piece of him. It’s his code; it’s similar to that of the harvester bots. Some believe unraveling that code will lead to a weapon that might save humanity. The robot resistance believes he’s the key to their salvation. The scrappers just want his parts.

Fantastic premise, right? Well, it gets better. There is a twist in the last chapter of volume one that throws a wonderful new cog into the workings and the story is only getting better from there.

A worthy ending to an amazing story. Honestly, amazing hardly feels like an adequate word to describe the Broken Earth trilogy. It’s more epic. Even though the main story spans a relatively short period of time, the entire story spans tens of thousands of years and those years weigh heavily on this final volume. Not in a way that slows the narrative. More in a way that broadens the story toward a scope that rests in that peripheral place we keep things we need to consider, but cannot look at too directly lest we lose our understanding.

In The Fifth Season, we follow a single thread, broken into parts. In The Obelisk Gate, we are confronted with the truth of this world. In The Stone Sky, we quite literally perch on the edge of where ever we rested to absorb yet another chapter as the story expands. The best part? I had no idea how it was going to end.

There’s a lot more to say, but some books are hard to review. Especially when they’re so well written and you feel as if nothing you could say would do the story justice. This entire trilogy is a story both simple and complicated and it’s extremely character driven. I loved the way the characters’ separate arcs leaned against each other, intersecting and bouncing. I also loved the world—and I spent far too much time debating whether it was science fiction or fantasy. Doesn’t really matter. It’s ALL good.

Is any list of mine complete without a book from Lois McMaster Bujold? Winterfair Gifts is an essential part of the Miles in Love omnibus edition. I am in the habit of skipping novellas and shorts, which is odd as I love writing them for my own series characters. In this case, reading is a must for two very important reasons.

The first is getting to see Miles safely married. After all the trouble he went to in A Civil Campaign to win Ekaterin’s hand, I wanted to see them actually wed. The day itself is nearly destroyed by conspiracy and intrigue, of course, but at this point, no one even remotely related to Miles would expect anything else.

The second reason to read this novella is for the point of view: Armsman Roic. We meet Roic in A Civil Campaign and at first I didn’t put him together with the third point of view in Cryoburn. I’ve read so many of these books out of order. Sometimes it’s wonderful to read them that way because you get to go back and see how something became, er, something. (Or someone.) In this case, I did myself a disservice. Of Cryoburn I really only remembered that I didn’t know who Roic was and that it wasn’t my favourite book in the series. In Winterfair Gifts, Roic not only manages to save the day (and the wedding), but also acts on his attraction to Sergeant Taura, and it’s wonderful. Really. After having read this novella, I found Roic a much more sympathetic character in Cryoburn, which I immediately reread just after.

Kith and Kin by Kris Ripper

If I had to sum this book up in one word, I’d choose “real.” Kith and Kin deserves many more words, however. The book is a near perfect family saga. The only thing that would have made it more perfect would have been another seven hundred pages including the relationship between Singer’s parents and Miles’ eventual adulthood. (So, two more books, please!) Not only is the story engaging and absorbing, Kris Ripper has created a world I was perfectly content to live in while the characters sorted themselves out. I loved that there were multiple points of view and multiple stories.

Back to this realness. One of the feelings Kris captured so well here is that weirdness that comes with being an adult child, especially when dealing with parents who haven’t really acknowledged that fact. Just about my favourite scene was when Jake and Lisa had to sneak out of the house to avoid Lisa’s mother—while carrying a baby.

Then there were Singer’s feelings on becoming a parent. On being a parent. Yeah. So much of that. Whether you carry a child or adopt one, this is a real, real thing. Being suddenly responsible for a tiny human being is terrifying. There’s the fear of dropping the kid or watching them choke. The usual stuff. There’s also that awful feeling that you’re not the parent you thought you’d be, or that this child needs. I loved watching Singer grow into his role, even while it was sometimes painful.

Read the rest of my review here.

All the Pretty Horses (The Border Trilogy, #1) by Cormac McCarthy

It’s almost a relief to get to the end of a Cormac McCarthy novel and not have *everyone* dead.

All the Pretty Horses is a beautifully textured story that reminded me a lot of Larry McMurtry’s Horseman, Pass By. Each tells the tale of a young man coming to terms with the world in his own way. For John Grady Cole, that journey will take him across the border into Mexico for an adventure you could almost envy. Almost. The story is startlingly funny and tragic in turns.

The rhythm of McCarthy’s prose is what catches and keeps me, every time, though, and this particular story is timeless and relevant and just so gorgeously told.

The Wasp Factory by Iain Banks

This is one of those books I’ve wanted to read for a while—and it was definitely worth the wait, particularly as by the time I finally got my hands on a copy, I couldn’t remember what it was about or why I wanted to read it aside from the fact Iain Banks wrote it. I dove in without glancing at the cover copy and, really, that’s about often the best way to experience a book. Going in blind.

This is not a story for the gentle spirit. The characters are challenging and the revelations often feel like a trip through, well, the wasp factory. Oh, yes—this is an actual thing and it’s… You’re just going to have to discover this one for yourself.

There is a lot more to unpack, but I hesitate to do so out of the fear of spoiling the book. All I can say is the only thing I’ve read that felt remotely like this was another book by Iain Banks. Also, I read this in one day. I sat still for six hours. For those who know me, that’s probably recommendation enough.

I love the idea of this book, of someone rebelling against labels. It’s something I think about a lot, about how we see, define and classify, and Rafe’s story, or his need not to be who everyone thinks he is, makes a lot of sense. His frustration and the limitation of his labels are so very clear. I have a lot of sympathy for him, even while he does the very teenage thing of digging a hole for himself that is almost too deep to climb out of.

I’m not as pleased with his epiphany, even though I get it. The whole bit where if he denies this big a part of himself, he no longer can be himself. Intellectually it makes sense, but I’m not sure he properly resolves why he needs to shuck his “labels.” Yes, most people are thinking about themselves and maybe his labels are more attached than self-pinned, but I also think he still needs to work some sh*t out. But, eh, he’s young. Plenty of time and all that. 😉

I think the hardest take away lesson from this book is the fact that Rafe had to do all of this just to play a football game with the guys. To be able to be one of the guys. To not have to surmount the misconception that gay means “not really male.” That made me sad. This is why I don’t like labels and pretty much refuse to claim any for myself. Because people can’t be so easily categorized. There is no one way to be a geek, a jock, a writer, gay, or even weird. And why can’t you be all of that and more, and why does any of it really have to matter so much? 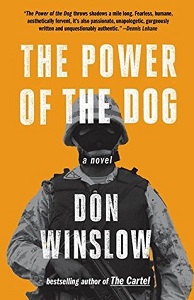 The Power of the Dog by Don Winslow

Another amazing book. Told you I’d been reading some really good stuff. The Power of the Dog is amazing not only in scope—it covers the “War on Drugs” from the 70s until the end of the 90s—but for the way Winslow managed to make a plausible narrative out of the intricacies of drug trade between Mexico and the United States. Some of it you will know, some of it… well, you might know more than I did. I can’t say I was truly surprised by the more shocking revelations. We live in a twisted world. More I read with a sense of dread and inevitability.

Woven through all of this is the story of two men: Adan Barrera (loosely based on “El Chapo”) and “The Border Lord,” DEA agent Art Keller. Other stories intersect, tying these men together and ripping them apart in a twenty-year-long saga. It’s so skillfully done. I hung off every word–and I do mean every word. I’m a champion skimmer, but not here, which is why it took me seven days to read this book. The final chapter is worth the ride. Incredible stuff.

I intend to read The Cartel soon. I need to read it. But I also need a break from the sometimes senseless violence of this world. Maybe in a month or so. 😉 (If you haven’t read The Power of the Dog, don’t read the blurb for The Cartel. Spoilers! They’d be spoilers I could live with because then you’d be like… but how? But they’d sure ruin that last chapter of Dog.

2 thoughts on “What I’ve Been Reading”