I haven’t posted about gaming in forever! I have been playing some great games, though, so it’s time to catch you all up. First, Dishonored and Dishonored 2, two neatly packaged, shorter games that allowed me to complete an adventure in less than six months. 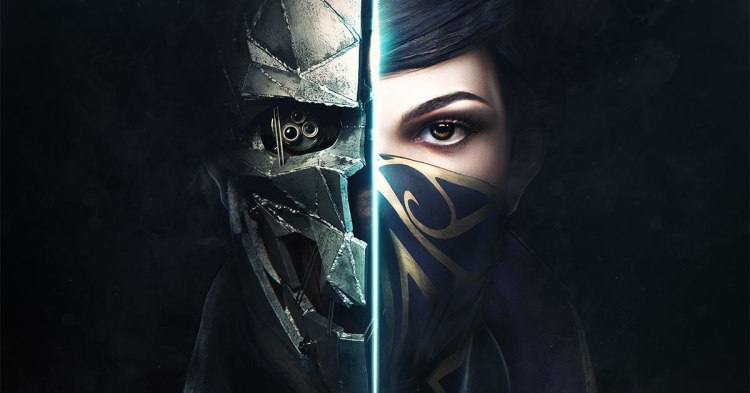 I could blame Alexis Hall for the fact I wrote all of two words in October. He’d probably happily take the blame, too. He loves recommending games and wrecking lives. But honestly, having just finished drafting an 85k book, I was ready for a break—but not a long one, which is why I decided to play Dishonored.

The story is simple. You play as Corvo Attano, Royal Protector to Empress Jessamine Kaldwin. Upon his return to the city of Dunwall, Corvo is framed for a crime he witnesses, but does not commit. In addition, Jessamine’s daughter is abducted. Corvo’s quest is twofold: clear his name and rescue the future of the empire, Emily Kaldwin. Having been betrayed once, it will come as no surprise when Corvo is betrayed again. And again. What makes this fairly simple story a standout, however, is the fact that the solution to every quest carries a direct effect on the state of the world.

The world is what I ADORE about this game. It’s so atmospheric. A part of it is the art and the setting (and the story), but a lot of it has to do with the fact you are contained within a few separate neighbourhoods, each of which has a subplot that ties into the main quest.

I love open world games. There is something wonderful about being lost in another place in space and time. It’s why I like reading epic fantasy, space opera and family sagas. Sometimes just hanging out in another world is entertainment enough. I can’t tell you how many times I’ve logged into Skyrim just to reorganize the storage cabinets in one of my houses. Or taken another trip through the Glowing Sea in Fallout 4, just because there is so much ground to cover and I’m convinced there is treasure out there somewhere. More treasure. I have visited every island in Black Flag.

Not all stories work in such an untethered environment, however. You either lose the main quest or any urgency associated with it. Dishonored does an amazing job of making you feel as if you could quest off the edge of the map while keeping you pointed in a forward direction. The side quests aren’t infinite in number. 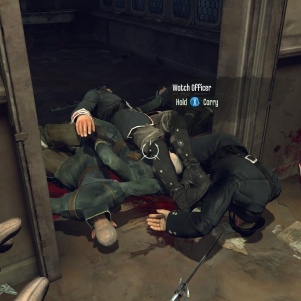 Skill choice also plays an important factor in the game. There are a few ways to play and you’ll need to customize Corvo’s talents to take the best advantage of each style. You can be a killing machine—and a very effective one. Or you can sneak your way around every goal without spilling a single drop of blood. Being sneaky is hard, and while I always enjoy making a pile of bodies, I found greater satisfaction in the challenge of passing through a map without triggering a single guard.

You can, of course, play down the middle, killing when you have to, sneaking when it makes sense to, and the solution to every quest can be handled in a manner that best suits your chosen style. It’s pretty awesome like that. 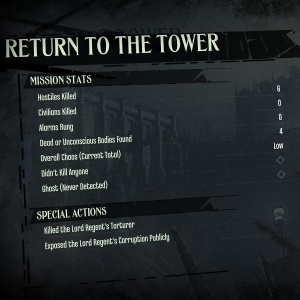 Further to this, though, is the effect your play style will have on the world. Bodies will attract rats and rats tend to swarm and swarms of rats can be deadly. They can also be possessed and directed toward your enemies. So, chaos ain’t all bad, but it will count negatively toward your epilogue. The cleaner your world, the more optimistic your outcome will be. Although Dishonored is a fairly short game (a single play through lasted 40 hours for me), it’s eminently replayable.

A preorder of Dishonored 2 came with access to all the DLC associated with the first game. The DLC is awesome. I mean, really, really good. Some of the best I’ve ever played. Two of the episodes play like extended, multi-chapter epilogues, furthering the main quest. The third, Dunwall City Trials, is horribly addictive. It’s a set of timed and scored challenges throughout the city. I played the stealth one for six hours straight one day. Six. Hours. Straight. I won the last one, which is probably the only reason I’m not writing: Eighteen. Hours. Straight.

Thankfully, Dishonored 2 arrived before I could attempt the next challenge.

Dishonored 2 is another gorgeously conceived game. The story isn’t altogether new and different. It’s actually a bit like playing Dishonored again. But there are some great twists (especially if you’ve played the DLC!) and a lot of inherent world building. I didn’t mind rescuing Emily again, because it gave me several more hours with Corvo. Alternatively, I could have played as Empress Emily Kaldwin this time around and with either character you can opt to run through the missions with or without magic, which is a great role play alternative if you’re into things like that. Also an interesting challenge. Trying for a full stealth run without the ability to see through walls? O.M.G.

Again, it’s the world that blew me away. The set pieces are STUNNING. I could have happily explored Karnaca for hours, and the game does allow you to wander about the map in that wonderfully limited fashion. There are side quests and they are rewarding. There are also small pockets of humanity that breathe amazing life into every corner. Three people singing in an alleyway, the banter between patrolling guards, the kid who taunts you from a second story window. The bums who will exchange secrets for a few coins, then curse you when you loot their stash. The singing, though. These cities and their denizens are stuffed with personality. My favourite zone was the Dust district. It was so weirdly apocalyptic with the constant threat of dust storms and the measures taken against them.

The puzzles are fantastic too. The clockwork mansion kept me entertained for days and, as always, figuring a way to sneak around the big problems proved the most satisfying challenge—even when my attempts resulted in yet another pile of bodies.

If I have a complaint about the game it would be the fact that as a whole, the ending had less emotional impact than the first time around. I suspect it would be different played from Emily’s point of view, which is what I plan to do next…

…after I finish playing Uncharted 1-4, which was my Christmas gift to myself along with a PS4 Pro. (I’m just about done with #2!)

All in all, I really loved Dishonored and Dishonored 2 and wouldn’t be opposed to playing Dishonored 3, however they want to spin the story.  Next up, I’m going to tell you all about my adventures with Call of Duty: Advanced Warfare. Hopefully I’ll fit in an Uncharted post before Mass Effect: Andromeda drops. We’ll see! 😀