INVERSION POINT releases in just three weeks,
but you can read the first chapter now!

“This is probably my favorite installment in the series.”

Chaos Station, Lonely Shore and Skip Trace have been nominated in several categories, including Best SciFi, Best Main Character and Best Secondary Character. We’re thrilled to be recognised! In addition, Wrong Direction, the story I wrote for the group’s “Don’t Read in the Closet Event” has been nominated for Best Humorous and Best DRitC Story. Voting is open until January 15th. If you’re a member of the group, we’d certainly appreciate your consideration! 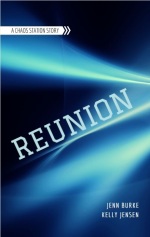 Have you read REUNION?

It’s been four years since Zander and Felix graduated from Shepard Academy. Four years since they shared a single night together. Now they have five days of shore leave to see if their friendship is still as strong as it was…and to see if the promises they didn’t want to make back then might be possible now.