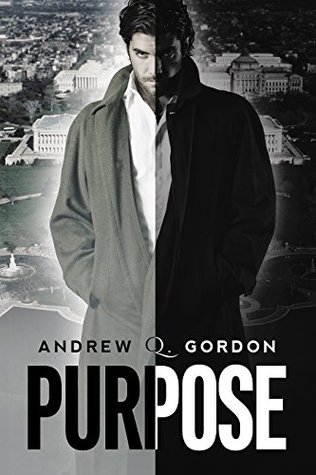 I don’t often re-read books, but when Andrew Q. Gordon sent me an updated copy of his book Purpose, I dove back in right away. I had remembered enjoying the story the first time around and am always in the mood for something a little different.

Here’s the bit that hooked me the first time:

Forty years ago the Spirit of Vengeance—a Purpose—took William Morgan as its host, demanding he avenge the innocent by killing the guilty.

For forty years, William Morgan has been avenging the innocent. Every year as host for the Purpose has him withdrawing farther from his humanity. He has adopted a new name – Gar – and has had his emotions on lockdown for nearly as long. He exists merely to fulfil his purpose, his days filled with the training that makes him strong and capable, his nights filled with stalking the guilty. One evening, on the way home from delivering vengeance, he meets the young man who will challenge everything he has come to believe about his Purpose and the way in which he fulfils it.

From the beginning, there is something about Ryan that calls to William and Gar. Ryan feels like a victim, but he is alive. His soul is not crying out for vengeance. He is also obviously troubled. Surprising himself, William makes an attempt to befriend Ryan. After several miscommunications, the men go their separate ways. Immediately, William senses danger and is possessed by the need to save Ryan. He does. A friendship develops from there, one that quickly deepens into something more.

William’s relationship with Ryan is a complication in many ways. He has not used anything but the name Gar in decades and in revealing his real name to Ryan, he opens himself to inquiry and memories he’d rather not revisit. We get a peek of the man behind the Purpose. His past, how he came to be a host for the Spirit of Vengeance and what it has cost him. We also learn his humanity is not totally lost. It’s just been hidden and without purpose.

Further complications arise when the FBI expresses an interest in a series of unsolved crimes. William is aware of the attention. It’s why he moves on so often and tries so hard to make vengeance look as if it’s the work of balance rather than one man. Counting on gang rivalry and accidental confessions to out his perps and see them brought to justice or dead are are two of his favourite tricks.

Then there is Ryan. There’s something about Ryan. It’s more than the fact his eyes are sometimes familiar or that he’s widening the chinks in Gar’s armour, exposing William to daylight. He’s making William question everything: his Purpose, the way he fulfils it and the biggest one of all, why him? Why was he chosen and why was one of the first innocents he avenged directly tied to him?

Purpose is one of those stories that begins simply and complicates beautifully. Gordon answers all of these questions while challenging the reader with more. The third person narrative (from Gar/William’s point of view) is interspersed with journal entries written in first person. These are the chapters where Gar answers the calls of the innocent, delivering vengeance to the guilty. Increasingly, however, these journal entries become more complicated and, through these alone, we can track William’s evolution or revolution, if you will.

For action lovers, there is a lot to like here. The FBI plot is well developed and escalates quickly and believably. William’s inventiveness and experience holds off the inevitable for a while but, the introduction of Ryan into his life, gives him a weakness he’s fully aware of but isn’t given time to explore.

The relationship between William and Ryan is very sweet. Ryan is so very young and written with just the right balance between annoying and sympathetic. His past hurts are significant but not splashed across the page. What he does for William is very significant and written with careful beauty.

The part I like best, however, is the revelation of just what the Spirit of Vengeance is. This is the reason I picked up this book and the reason I re-read it. The concept is quite unlike anything I’ve read before. At first, I thought it might be a situation akin to Justice in the Dragon Age: Origins expansion Awakening. Spoiler alert: it’s not. But the real story is equal parts compelling and fascinating.

The end of the book leaves us with a very big question. It’s one readers can answer on their own and further adventures can be written in our own heads. I do hope Gordon returns to this world, as I believe there are more stories to tell. But if he doesn’t and, as a writer, I understand the drive to explore new territory, to tell the next story, Purpose is still an absolutely satisfying read that I recommend without hesitation.