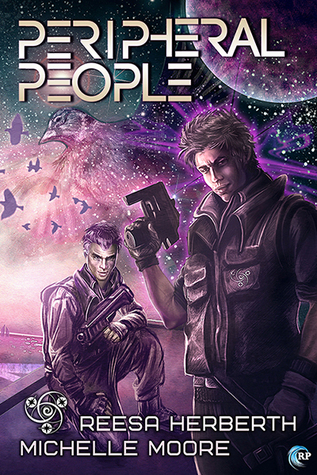 The cover copy could have said nothing more than ‘psychic detectives in space’ and I’d have still picked up Peripheral People by Reesa Herberth and Michelle Moore. By the end of the first chapter, I applauded my decision. In the Ylendrian Empire, two teams of detectives work together to solve crime. The physical evidence is collected by the Inspectors and the psychic evidence is examined by a Reader/Ground team. It’s not a foolproof system. A case cannot be tried on psychic evidence alone but a Reader can help narrow down a profile and offer clues for location and motivation. The Ground is integral to this process as the psychic’s anchor. The Investigators take care of the more traditional aspect of the case: the legwork.

The story begins with a routine investigation and a trip to the morgue. Senior Investigator Corwin Menivie and his partner, Nika Santivan, have a theory regarding the untimely death of a young woman. Reader/Ground team Westley Tavera and Gavin Hale are asked to determine if the physical evidence matches the psychic trail left behind by the deceased. At the morgue, Westley inadvertently reads a different body first and is quickly consumed by the victim’s last terrible hours. Reading the body of the actual victim is comically restful after that and the pronouncement of accidental death is confirmed.

The more horrible death of the first body haunts West, however, and he puts in a request to investigate the case. The rest of the team isn’t exactly thrilled by this. Gavin, because he worries for his partner’s mental health and this case promises to be deeply tricky and sticky. Corwin, because he’s not a fan of Psy Agents, for many reasons. Nika, because everyone else is being contrary. One thing they can agree on is this case will not get the attention it should, because the victim is one of those peripheral people. Homeless and most certainly missed by no one.

Another body matching the profile of the first – abuse, torture and death – makes it an official case. While Reading the second body, West falls into a psychic trap left by the killer and the team realises that not only are they looking for one sick and twisted individual, he knows they’re on his trail and seems to be playing with them.

Following the killer is not simply a matter of investigation. Spliced in between engrossing chapters of police procedural is the story of four people learning to work together. Each brings a different strength to the team and each has definite weaknesses. Two of them are hiding secrets that could be detrimental to their performance as agents and investigators. These mysteries and their resolution are as enthralling as the case itself. When Nika and Gavin give in to the physical attraction between them, this only causes more problems for the two more irascible members of the team. West can hear his partner’s sexual escapades on the psychic channel. Corwin appears just as disturbed. They indulge in a little itch scratching of their own, but it’s clear Corwin is uncomfortable with intimacy.

Put four people in a closed environment, pump in some eau de sexual tension, add in some past indiscretions and a serial killer with an over-inflated ego, and tempers will more than fray. But when another member of the team proves they’re not invulnerable to the psychic traps left for Westley, all four must pull together to solve the case. Despite personality clashes and differing procedural preferences, they need to have one another’s backs or they’ll lose more than a wanted killer.

I really enjoyed Peripheral People. The authors don’t spend so much time world building you’re left too numb to read the story. I always appreciate that. But there is enough detail thrown in along the way that readers new to the Empire won’t be lost. There is a sense of scope and history to this world I found both interesting and grounding. The characters are the definite focus, though, even beyond the mystery. The case is fascinating and gruesome and West’s trips through psychic hell are very well written. But I might not have enjoyed that aspect as much if I hadn’t liked Westley as much. He’s a wonderfully engaging character. Annoying in some aspects, conceited regarding his fantastic abilities and often too flippant, but genuinely good-hearted. Characters without flaws aren’t that interesting, anyway. Putting him against the curmudgeonly Corwin was inspired. The two are like the proverbial chalk and cheese. Corwin, himself, is a fascinating character. I’d love more of his history. The story of his past is teased out in slow drips and it’s integral to the plot. Nika and Gavin are the secondary characters here, but they often don’t feel that way. They’re as important a part of the team and story as Corwin and Westley.

The mystery/thriller aspect is also handled well. I did figure out whodunit before the end of the book, but there is enough complication toward the end that I did doubt my conclusion. The final showdown is thrillingly long and twisty and demands to be read in one straight sitting. Then, for those who like all their loose ends tied off, there is a final chapter that does just that, leaving the reader with a nice sense of satisfaction.

Peripheral People is the fourth book in the Ylendrian Empire series. It is a fully stand alone novel, however, requiring no prior knowledge of the world.

One thought on “Review: Peripheral People (A Ylendrian Empire Novel)”