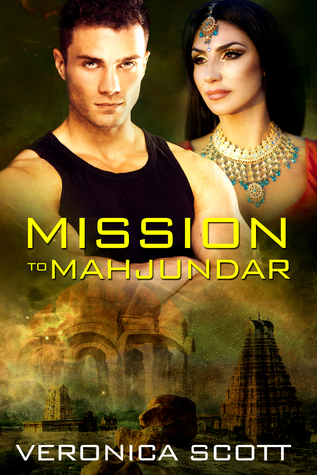 Major Mike Varone and his cousin, Johnny, have been pulled out of retirement for one more mission to Mahjundar. A ship has gone down in the mountains and the crew needs rescue. Seems simple enough but simple doesn’t make a very compelling read, does it? Their first day planetside adds several complications. The crash course in language and culture doesn’t cover the current political climate or help them interpret the nervous twitches of their guide. The bomb in a public plaza is a more obvious marker of civil unrest.

The bomb is an assassination attempt, the apparent target the current empress. Caught in the blast radius is a princess of the blood, Shalira. Mike rescues the princess, discovering in the process that she’s blind and has been since a previous assassination attempt fifteen years before. His gallantry is awarded with ceremony, a useless dagger and a task: he is asked to escort the princess into the mountains to meet her betrothed. Acceding to the emperor’s request will delay their own mission. It’s made clear that refusing will result in permanent deferral, a withdrawal of permission to venture outside the city.

The journey into the mountains reveals the farce of Shalira’s impending marriage and uncovers a deeper plot that lies at the core of the political unrest on the planet. Mike and Johnny are drawn into events, at first unwillingly, and then because of the growing attraction between Mike and Shalira. On a remote and somewhat barbaric planet, Mike has found the woman of his dreams. Shalira has found someone who doesn’t consider her blindness an imperfection. For his part, Johnny is simply a good man, and loyal to his cousin.

I really enjoyed author Veronica Scott’s world building. Mission to Mahjundar reads almost like fantasy. The planet of Mahjundar has a rich culture and history, yet there are subtle reminders we’re in a future, either our own or one of Scott’s making. Technology is woven in with the magic, giving the reader the sense this planet has been inhabited for so long and has drifted so far from the mean, that technology is magic. Mike’s thoughts and recollections keep us firmly in the present, however. The universe of The Sectors clearly exists outside the planet, giving Mahjundar a place in the whole.

The action throughout the novel is thrilling and well-written, the choreography of every battle easy to follow. The various tribes are different enough to be interesting rather than simply derivative. I gained the sense of a vast and fascinating history leading up to the current events.

My only quibble is the romance. It moved a little too quickly for me. I would have liked more time spent on Mike and Shalira getting to know one another. They fall awfully fast and the chemistry feels very ‘heat of the moment’. The affection between them does feel genuine and there is a sense of destiny in their pairing. I simply prefer a longer build. The adventure and stakes are high throughout the novel, so we don’t get a sense of how these two will fare as a couple when their lives don’t depend upon the actions of the other.

Despite this little nitpick, I enjoyed Mission To Mahjundar. It’s a fun read, very fast paced and easy to follow with good adventure and excellent world-building. The love story is integral to the plot, which is a plus for fans of romance. Though secondary, Johnny is a great character and I’d love to see him revisited in a future book set in this universe.