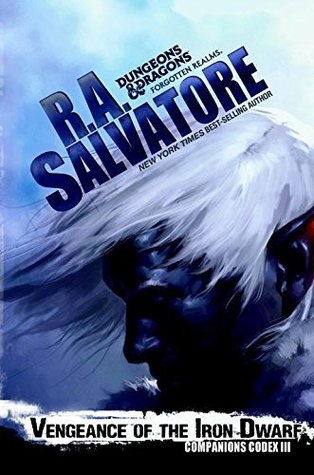 There are nearly thirty books in the Legend of Drizzt and a number of side ventures. When you get this far into a series, spoilers are inevitable. So if you’re not familiar with the legend, much of the content of Vengeance of the Iron Dwarf will confound, and perhaps ruin you for everything that comes before.

For those who have journeyed this far, vengeance is sweet.

At the end of Rise of the King, the hundred year peace between the orcs and the dwarves had shattered. Nesme had fallen and the dwarves were besieged. The surface elves had yet to decide how the conflict affected them and the drow elves were so busy stabbing one another in the back, it was a wonder any of them survived until the end of the book. Toss in Jarlaxle’s fiddling and it was a very long wait for the next instalment in the Companion Codex.

In Vengeance Of The Iron Dwarf, party lines shift and align – as they have to. The orcs outnumber every other army combined, so breaking the siege isn’t simply a matter of killing the enemy. The dwarves have to fight smarter. They have to fight together. The elves and humans can bolster their efforts, but everyone has to stop thinking about what’s in it for them. Of course, the drow contingent thinks only of what’s in it for them and I spent a good portion of Vengeance wondering what was in it for Jarlaxle. His help is often the dubious sort, but over the last century or so (Toril-time), he’s become a little more predictable and he definitely has a soft spot for Drizzt.

I enjoyed reading about Team A – the Companions of the Hall – and Team B – the remnants of Drizzt’s new crew who work together here. Personality clashes were inevitable, but so were the spell combinations, to borrow an RPG term. Having everyone on the board also fostered the feeling that grew throughout this book, that the fate of the dwarves didn’t matter only to the dwarves. The shining moment, for me, came when Bruenor revealed his plan. He’s no longer the king of Mithral Hall and knows well he can’t wear that crown a third time. But he cannot watch all he strived for fall into confusion. I also delighted in reading Wulfgar and Regis working together. They are such an unlikely, yet compatible pair.

There are several side bets won and lost as the dwarves attempt to break the siege, providing a few story threads that will complicate future tales. But aside from a couple of interesting revelations, the plot here isn’t twisty. Vengeance Of The Iron Dwarf is a straightforward book of tactics, where Salvatore pits two forces against one another and crunches the numbers back and forth. Any trickery is reserved for combat and it’s all well fought.

Where to go from here? Bruenor has a throne to claim and hold, so it will be back to Gauntlgrym to kick some drow backside, once and for all. Hopefully!