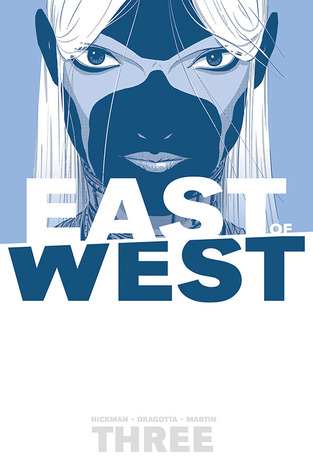 East Of West Volume 3: There Is No Us’ collects issues 11-15 of the comic ‘East Of West’. It’s tempting to babble senselessly about how good this comic is, urge you to go out and buy all available issues right away, but I wouldn’t be much of a reviewer if I didn’t explain my fascination. I’ll start with a little back story.

Loosely based on the ‘Book Of Revelations’, ‘East Of West’ tells the story of impending apocalypse. It’s clear from the very first issue that the world has been destroyed and revived before in what might be an endless cycle. What’s not clear is the role to be taken by the very recognisable symbols of a biblical apocalypse. The Four Horsemen are missing one of their number, Death. The Seven Seals have been replaced by seven nations. The Beast is…difficult to explain without spoiling some of the surprises of the story. Then there is the Message, which is presented as a constraint upon the actions of all. A dictate on how the world will end. Mixed into this over-arching story are the lives of the people within each nation. The leaders and their friends and foes.

The cover of Volume 3 features Xiaolian. The title, ‘There Is No Us’, again perfectly encompasses the events of the collected issues as well as Xiaolian’s philosophy. After rallying her people, she departs for a meeting with the other nations where she plans to call for an end to the illusion of peace. We visit with each leader as they make their preparations and depart for the Wall, the neutral zone that will host the meeting. These glimpses of each nation serve as a quick reminder of who the players are and what they are up to. After waiting months for the next collected volume, I found it easy to slip back into the story and was surprised by how well I remembered each character’s quirks and faults. To me, that is a mark of great story-telling.

The second chapter begins with politicking. The dialogue is clever and again serves to establish the intention of each nation. The Endless Nation, which is the most obscure player thus far in that we haven’t seen a lot of them on the page, is called to project an outcome to the war Xiaolian wants. Predictably, they outline the terrible cost of any match of opponents and call for peace. Violence interrupts the meeting and the chain of events that follows ensures that war is the only outcome. The panels depicting the breakdown of negotiations are brutal and gory, which only serves to highlight the shocking nature of each incident.

From there, we move to the dead lands and the shootout between Death and the Ranger. While they duke it out, Wolf and Raven attempt to bind the power loosed by the death of wolf’s father. They…succeed in doing something. Trouble is averted for now. When Death reveals why he was dealing with a chosen, the Ranger stands down. Post-brawl negotiations are interrupted by a rumble overhead: the ships of The Endless Nation heading to war.

Next, we check in with the three Horsemen and Ezra. More panels of delightfully depicted gore here. The Horsemen want Ezra’s help in killing the Beast. As this is counter to the Message, Ezra goes a little nuts.

The final chapter has all four Horsemen arriving at the lair of the Beast. As always, this part of the story is creepy-cool. As always, I’m going to say very little regarding it, except that I was once again surprised by events.

Closing the back cover of the book, I saw a quote:

We would tell you to pray, but it wouldn’t do any good. You have earned what is coming to you.

These little quotes appear throughout Volume 3. They’re a reminder of how deep this story is and illustrate the attention to detail that makes this comic special. The art alone is spectacular. I rave about it every review and I’ll do so again here. The composition of each panel is stunning. No image is extraneous or wasted. The art tells as much of the story as the dialogue. But without the smart dialogue and strong characterization, the art would just be pretty. The collaboration between writer Jonathan Hickman and artist Nick Dragotta is what makes ‘East Of West’ such a delight to read.

One thought on “Review: East of West Volume 3: There is No Us”