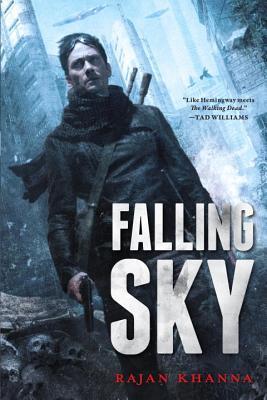 It’s hard to read about a plague called the Bug when global viral catastrophe is a very real threat. This week saw the first case of Ebola in the United States. I live a couple thousand miles north of Dallas, but I’ve seen the movies and I’ve read the books. Apparently, I like scaring myself. I’m not alone in my fascination, however, which is why post-apocalyptic fiction has always had a place…and currently enjoys such an upsurge in popularity.

Falling Sky by Rajan Khanna captures the panicked urgency of a viral plague extremely well. It’s not clear how long the world has been under the sway of the Bug, but the effects are profound. The bulk of humanity or what’s left of us has taken to the sky to live in airships and floating cities, some of which are tethered to tall buildings. Below, Ferals roam the detritus of civilisation. The Bug is extremely contagious, but does require contact, generally that of the fluid kind, which has also wreaked some interesting changes on society. Casual sex just isn’t a thing, for instance, not when just kissing someone can cause you to Fade, losing the power to reason.

Accordingly, Benjamin Gold is a bit of a loner. He’s been flying and following his father’s rules for most of his life. When the scientists he’s working with want to capture a live Feral for experimentation, he decides to return to the solo life. But he’s already missing the company of one of the scientists, Meredith, when he learns that the scientific community is in danger from airborne raiders. In his attempt to warn Meredith and her friends, Ben loses his ship. He then has to call on unlikely and former allies to get it back and to put a dent in the raiders more permanent plans.

The adventure aspect of Falling Sky is as compelling as the world. Khanna’s writing is clear, Ben’s voice engaging. I quickly became invested in his story and his fate. In between the adventure, we learn pieces of Ben’s past – what happened to his family and, to some degree, the world. I enjoyed these interludes. I also enjoyed Ben’s exploration of faith and what it meant to him. One of my favourite scenes in the book was his visit with the rabbi in Tamoanchan.

The climax of the story is, well, climactic. The best part, though, from a reader’s point of view, is that Ben made a move I did not expect. This really deepened a character I already liked, despite his sometimes immature behaviour. The way Ben bounces off his friends and allies is believable, however, and I enjoyed watching him come to the realisation that Miranda was more than a client.

Falling Sky ends with a small victory, but it’s obvious that it’s the first battle in a brooding war. The raiders have plans that extend beyond piracy and there is still the Bug for which Meredith and her colleagues hope to find a cure. Given the great start, this is a story and a series I’m keen to follow.

Finally, I’d like to mention the cover art. In short, I love it. So many times the cover art doesn’t clearly represent the content of the book. The illustration by Chris McGrath really captures both the ambience of Rajan Khanna’s world, from the desolate city scape and distant airships to the figure of Ben, who looks exactly as I might have pictured him, outfit and all.