Ship of Magic by Robin Hobb has been sitting on my to-be-read shelf for about seven years. Its eight-hundred or so pages turned my eye a few times, as did the knowledge that ‘The Liveship Traders’ trilogy wouldn’t be revisiting Fitz from ‘The Farseer’ trilogy. I still wanted to read it, though, and I’m glad I did.

There are three principle characters in Ship Of Magic. Althea Vestrit is the youngest daughter of a trader family. She has been sailing the family’s liveship since a young age and fully expects to inherit the captaincy when her father passes away. His death will be the one that quickens the family ship, bringing the wizard wood hull and figurehead to life. She’s not eager to see him pass, however, and when he sickens, she chafes beneath the authority of her brother-in-law, Kyle Haven, who not only usurps the role of captain, but plots to relieve her of her inheritance.

Wintrow Haven is Kyle’s son, Althea’s nephew. He was given to the priesthood as a boy and wants nothing more than to embrace Sa. With his grandfather mortally ill, he is called home and quickly finds himself thrust between Althea and Kyle, the needs of his family and his desire to be a priest of Sa. A quickened liveship needs a family member aboard, one of blood. With Althea turned out by Kyle, Wintrow is pressed into service. The boy forms an uneasy bond with the liveship Vivacia, but the pair are both troubled, which could mean madness for the ship and disaster for all aboard her.

Kennit is a pirate and probably one of my favourite of Hobb’s characters. He’s an excellent pirate; he has the fear and respect of his crew and makes more than a tidy living at what he does. He’s also self-centred and somewhat thoughtless toward the needs of others. But he’s very clever, he dreams of being king of the pirates. He has to make many compromises in order to steer his ship and crew toward that goal. One thing he is not willing to give up on, however, is his wish to own a liveship. Or, steal one. Pirates generally don’t buy what they can take for themselves.

Supporting these three is a cast of heroes and brigands, spoiled brats, sorcerers and women trying to secure their place in an ever-changing world. The ships get a point of view, too.

Robin Hobb loves to torture her characters. She tosses them in a grist mill and watches as all pride gets ground down, limbs and dignity stripped away. She bakes the results, obviously because that would further torture her characters. But they do emerge from the oven as perfect loaves. Analogy aside, it’s the characters that make Hobb’s books so readable. Her heroes are flawed and while some of them recognise their faults, the majority of them need that ride through mill to figure out who they are.

What rarely changes, however, is what they want, which is why they all try so hard and why the pages keep flying beneath readers’ fingers as we all wait to see if they get it.

The world of the Six Duchies is well-imagined. There is not a detail left unexplored, making every setting feel absolutely real. The liveships are the most fascinating of those details. They are made of a bargain between the trader families of the Rain Wilds and Bingtown, magic wood shipped down the Rain Wild river, contracts paid back up. Their price is gold and blood. Three family members must die aboard the vessel for it to quicken. I loved the lore surrounding the ships and the teasers Hobb peppered throughout the book that whatever magic imbues the wizard wood is not what it seems.

The story doesn’t end in this book. It’s definitely the first volume of a trilogy. But each of our principle characters does win something before the last page, which leaves the reader satisfied, but curious. I’m generally not a fan of irresolute endings, but in this case I found myself mollified and determined to seek out the next book. In case my review doesn’t make it absolutely clear, I loved Ship Of Magic and was disappointed to find the cover bare of awards. Fantasy fiction doesn’t get much better than this. 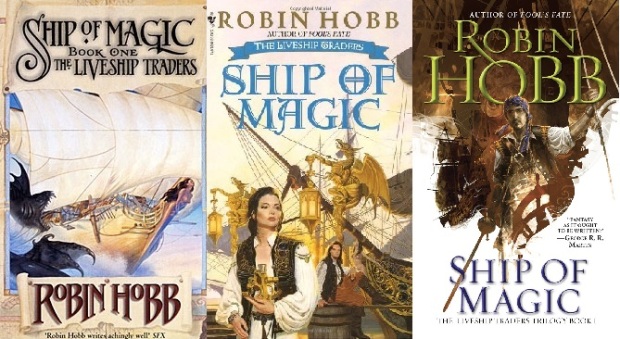 Ship of Magic has been around long enough to get a few new covers. All of them are gorgeous. The first edition, released in 1998 had art by John Howe. The copy I have features a painting by Stephen Youll. The latest update is by Didier Graffet. I like all of them, but Stephen Youll’s painting is my favourite. To me, Althea was the most important character in the book, and she’s front and center here…and modestly dressed. There are also a number of international covers.

2 thoughts on “Review: Ship of Magic (The Liveship Traders) by Robin Hobb”