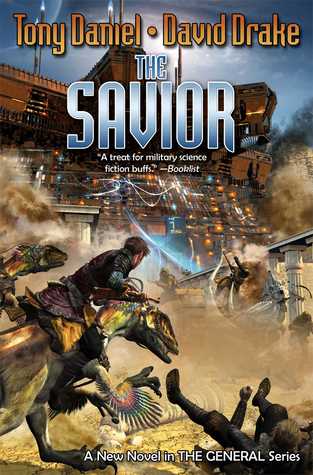 Many of us talk to ourselves and consider ourselves lucky if the voices in our head don’t talk back. Major Abel Dashian relies on the fact his voices will talk back, offering information, projection, strategy and advice. His voices have names, too. Center is a computer intelligence and Raj Whitehall is a stored personality. Together, they make Abel’s life interesting. By age thirty, however, Abel has stopped questioning his sanity (mostly) and is fully committed to their mission, that of saving the planet Duisberg and perhaps humanity.

At the age of six, Abel Dashian was unaware he lived on a planet. He lived in the Land and his people warred with the desert people, known as Redlanders. Periodically, the Redlanders invaded the Land. History recorded these invasions as the Blood Winds. They were Zentrum’s punishment of the wicked.

In The Heretic, we learn that Zentrum is not actually a god, he’s a computer with an earlier, less flexible intelligence than Center. Abel learns that his home is actually a planet called Duisberg and that it, like many other planets, has been orphaned by a technological plague. Zentrum’s mission is to prevent another collapse. It does this by declaring all technological advances heretical, the instruments of such known as nishterlaub. Heretics die horrible deaths.

Human beings are curious by nature, however, and advancement does occur, even under threat of death. There is always an easier way to do something, a better machine. Better medicines save lives. Better weapons win wars. Zentrum snuffs these sparks by initiating a Blood Wind. But what Zentrum in its finite wisdom does not know is that the planet Duisberg needs technological advancement or the population it supports will be rendered extinct by impending asteroid strike. This is where Abel Dashian comes in. The heretic must become the saviour and Zentrum proves itself to be a vindictive bastard.

In The Savior, the Blood Winds are blowing. Outnumbered, outgunned and repressed by the edicts of Zentrum, the forecast for the Land looks grim. Their only hope is to out-think the enemy, which is exactly what Abel and his compatriots do. Relying on the voices in his head, Center for intelligence and projected outcomes and Raj for strategy, Abel pokes holes in enemy. Flanks them, finds back doors into their encampments. Turns their weapons on them as they flee, always destroying the heretical advances afterwards. He is winning the war. Accordingly, Zentrum strikes where Abel least expects it.

Robbed of an important resource, the young major pushes on. Relying on what he has learned and the people he has gathered about him, his engineer, his closest friend, his lover, his father,and the men who follow him into battle. Abel takes the war directly to Zentrum, attacking the very foundation of his planet’s culture.

The Savior is a sequel worth waiting for. There is more of everything inside; military strategy and war, backstory and human drama, all at higher stakes. The story doesn’t meander off into pointless sub-plots and yet no thread is forgotten. Tony Daniel and David Drake pick up where they left off and run, without stumbling, toward a fantastic conclusion. They don’t run a straight line, however. Yes, we want Abel to win and Zentrum to die…er, lose. But as much as I like military Science Fiction, I don’t want to read battle after battle. The Savior delivers so much more. The stories of Abel’s many allies are just as compelling. Mahaut wields her intelligence, while never quite forgetting how to use a blade. Timon questions his faith, but never his friendship with Abel. Landry follows his curiosity and Joab Dashian does what fathers do best. He believes in his son. I found the conclusion of the book to be immensely satisfying.

While The Savior does end this chapter in the greater story, I feel there is mileage yet in the series. I’ll be definitely be on the lookout for the next tale of Raj Whitehall. In the meantime, there are eight previous novels to keep me busy.

One thought on “Review: The Savior by Tony Daniel and David Drake”