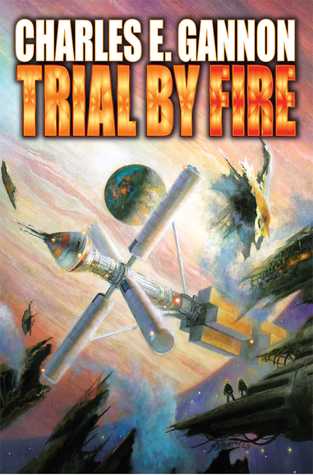 Trial By Fire is a big book. Six hundred and forty pages big. It’s chewy and complicated. Somewhere near the end, I decided the plot was something like a game of chess. Every page and every point of view represented a move and might hide a clue to next six moves planned by that player. The vast battle for Earth certainly reads that way and when that sixth move is finally played, it’s the sort that has mediocre players like me thumping their head against the edge of the board. I’m not much of a strategist, you see, but luckily, Charles Gannon is.

I mentioned a vast battle for Earth. That’s the bulk of Trial By Fire and wonderfully demonstrates the aptness of the title.

Recently returned from a convocation of exosapien species where humanity’s entry to an interspecies accord was hotly debated, Caine Riordan would be right in expecting a short vacation. He has been formally discharged from military service and currently occupies no role greater than ‘one of the dudes who went to meet all the aliens’. Unfortunately for him, that role will continue to define him throughout the course of the next four months and beyond. The opening sequence is fantastic. It’s a fast-paced and coherent way to both show the pressure Caine is under and to remind the reader of the events of the last book. With as much as I read, I sure appreciate the effort, even if Fire with Fire is quite memorable.

The action quickly escalates. Allied exosapien forces launch an attack on Barnard’s Star, apparently devastating the human forces. Caine is caught in the crossfire, of course, and with his ‘pal’ Trevor Corcoran, pulls of a daring self-rescue. They meet up with an Arat Kur diplomat and form a relationship of a sort that will remain important throughout the course of the book.

With a hole punched in the line of humanity’s defence, the exosapien fleet advances to Earth and quickly establishes a ground base in Indonesia, a target which is chosen for very specific and strategic purposes. What follows is pure military Science Fiction. If you love it, you’re going to love this book. If you don’t, you might have a hard time pushing through. Every battle is nailed down and examined from several angles and points of view. There are a lot of characters and voices to follow and a lot of strategy to absorb.

Thankfully, Gannon likes rewarding his readers, meaning the bulk of his teasers are followed up very quickly. More significant, however, is my chess analogy. Yep. On the surface of it, you think you know what is going on. But there is another game being played, one that drives the war between the Arat Kur and Hkh’Rkh (no, I can’t pronounce it neither, just grunt inside your head) and the humans. Overseeing proceedings are the Ktor and Dornaani and they are both inscrutable and ruthless in their methods.

Caine is the ultimate pawn. The reader should be prepared for this as he was used and abused in the first book. There is no better tool, however, than one willing to work. He weaves through the war, adopting one role after another until he is perfectly placed to strike, only to become ensnared in his own trap. The convergence of Caine and his companions, Trevor, Opal and Elena, is another thread of strategy that interlaces the story of the war and the greater plot.

The conclusion of the war might feel ‘foregone’. No one wants to read a book where humanity loses, right? Not many of us, anyway. We’d rather celebrate our ingenuity and uniqueness on the galactic stage. The conclusion of the war is not the conclusion of the story, however. It’s merely the end of a single match, and the revelations contained therein… WOW! They make the journey through every one of the previous six hundred pages more than worthwhile. I highlighted several revelations just so I could annotate my copy of the book with: aha! And later: AHA! A little later on: EEE!

As an aside, I highlighted many wonderful passages throughout the book, snippets of dialogue that I felt told the story ‘in a nutshell’, until I came across the next and amusing turns of phrase like: ‘warbling phlegm’, which described the voice of one of the exosapiens. I’ll take another second here to note how well Gannon writes his aliens. They’re separate and consistent with marvellously contrived speech and behaviour patterns.

The best part, though? The story isn’t done. Not by a long shot. There are so many new plotlines to follow, in fact, that I can imagine Mr. Gannon has several thick journals of notes, each tucked away under a gleeful smile. Really, my only complaint is that I’ll likely have to wait a year for the next book.

2 thoughts on “Review: Trial by Fire (Tales of the Terran Republic #2) by Charles E. Gannon”