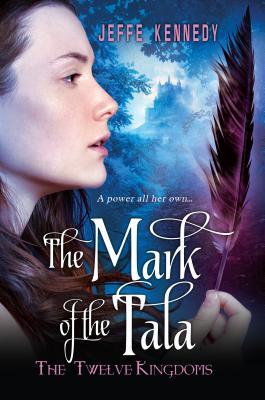 ‘The Mark Of The Tala’ is the first of three novels set in ‘The Twelve Kingdoms’. Each book tells the story of one of three sisters.

As the oldest, Ursula is heir to the throne. She has a head for politics and strategy and sleeps with her sword. Amelia is the youngest and the sweetest. Her beauty stole Ursula’s suitor, but everyone forgave her because she’s just that nice. Andromeda is the middle sister, the invisible sister. She’s the daydreamer and happy in her insignificance. ‘The Mark Of The Tala’ is Andi’s story.

Out riding, Andi veers close to the border of the Wild Lands. There, she is confronted by a strange man who commands a pack of wolves. Rayfe insists he’s been looking for her and waiting for her father to send her to the Wild Lands, as per a promise to be his queen. Andi attacks him and escapes, but not before he manages to wrest a kiss from her. He has blood on his lips from a wound she inflicted. He bites her lip and their blood mingles for a second. In that second, everything changes.

Soon after Andi returns to the castle, a massive raven shatters a window, heralding an attack of the Wild Landers, known as the Tala. Andi’s father, the king, places the blame on her young shoulders. At once, the invisible sister becomes important. She’s not used to the spotlight and ultimately tries to hide. She begins spinning lies, hiding the truth of the kiss and the changes it has awakened inside of her and the dreams that begin to plague her.

Andi is not the only one hiding the truth, however. As the Tala continue to besiege the Twelve Kingdoms, Andi looks into the history of the Kingdoms, including the circumstances surrounding her parents’ union. She discovers her mother, Salena, was of the Tala and that she always expected to return home to the Wild Lands with her daughters. Unfortunately for Salena, she died giving birth to her youngest.

Andi also learns of the Tala, but in a limited manner. She has access to some texts hidden away when history was rewritten by her father’s court and Rayfe, the stranger from the Wild Lands, visits her dreams. Andi comes to realise she has a destiny and that her loyalty to her sisters and her Kingdom might actually be their downfall. So, she arranges a way to honour the treaty between the Kingdom and the Tala, to become Rayfe’s queen.

From there, she then has to learn to harness the power awakened within her, find her place with the Tala and forge peace between the two lands.

In parts, ‘The Mark Of The Tala’ reads very much like romantic fantasy. From the moment Andi meets Rayfe, she is enthralled. He’s attractive and mysterious enough to warrant the fantasy and the romantic premise and, after they get together, there is definite chemistry between the two. On the plot side of things, ‘The Mark Of The Tala’ is actually a pretty good read. The Tala are shape-shifters. I’d have liked a little more history there, but perhaps we’ll learn more in the next two books. As it stands, their culture is well explored as Andi learns to embrace that part of herself.

The story ends with enough dangling threads that the reader will be interested in continuing. But there is also a nice sense of conclusion for Andi and Rayfe. The plot of this book is satisfying. Of course, the included teaser for the next book, which is Amelia’s story, had me wanting to read forward immediately.