“There’s Horsemen on the plains, the sky’s red as blood, and only the blind can see a better end.” 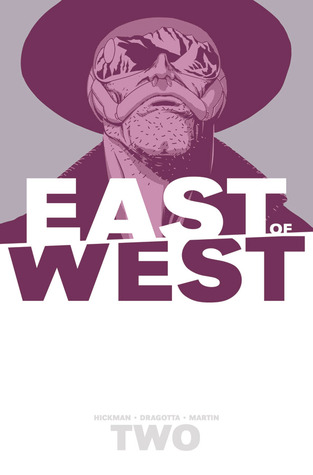 Fate was always going to put ‘East Of West’ in my path. I devour post-apocalyptic stories with unholy glee and have done since I discovered the ‘Book Of Revelation’, which is probably why I enjoy ‘East Of West’ so much. There is history here, a lot of it. Creators Jonathan Hickman and Nick Dragotta have pulled snippets of story from several well-known legends and have fused the pieces together with their own imagination. I really love their take on the end of the world. I love this comic series. Now I’m going to continue to enthuse while I talk a little bit about ‘Vol. 2: We Are All One’.

The title is very appropriate. Throughout this collection, issues 6-10 of the comic, the back story widens to include and link several of our main characters. Many of them were involved in the past, willingly or unwillingly. Wittingly or unwittingly! They’re all connected, throughout history and time. There is a sense they are as fated to be together as me and this series.

On to the story. Accused of being a traitor, Bel escapes the conclave and goes to find Justice. We get our first delicious slice of back story here and a promise from Justice to serve just that, saving Bel for last, of course. Meanwhile on, Death is looking for his son. Insert another glimpse of back story, this time for Ezra Orion, who was caught up in Bel’s escape and is now paying a terrible price. My heart wrenched and my gut clenched for this one. It’s the story and the art. This is a partnership that breathes hyper-realistic life into every frame.

Back at the white tower, the city is on fire. Presidency is not an easy task, particularly under the constraint of the Message and the Word. Here, the reader gains a sense of both the urgency and the futility the seven must feel while the world races toward the end. They have to keep it together for just that long and then give it up. Talk about anti-motivation. Then again, I’m not the disciple type.

Death confronts the Oracle and she extracts a terrible price for information about the whereabouts of his son. These panels are suitably grisly. On to John Freeman, who receives a lesson in history from his father. This is another chunk of back story that shows timeless connection between many of the characters. The lessons from his father help glue the story together while reinforcing the fact it is huge.

‘East Of West’ has always had the depth of a novel. That’s why I enjoy it so much. The issues don’t feel episodic in the traditional comicbook sense, even if each serves a purpose. Rather, each issue is a chapter of a larger and ever-growing tale. I love the combination of back story, plot and hints of possible futures. For me, each issue is another building block, I suppose. Separately, they serve a need. Together, they are so much more.

The last chapter has Death meeting the man who can tell him where his son is. Unfortunately, for all involved, the Ranger has also caught up with his prey. Cue epic battle and denouement. Of course, the story doesn’t end here. In fact, there is much left to tell.

Before the end, we check in with the Beast. I’m not going to detail this scene much except to say it had my skin crawling. Really and truly.

So, to reiterate, this is a fantastic story done justice by volume two. The art continues to be amazing and the writing is top notch. There are no characters underserved by the collaboration of Hickman and Dragotta. I don’t want to discourage those who like to read their comics issue by issue, but I really love the way multiple issues work together in this series, as if designed to hang between two covers as a single unit. Unlike some collected comics, these graphic novels work well. They have a beginning and an ending, which only leads me to praise, once again, the scope of the project, and the imagination of its creators.

The next collection, ‘East Of West Vol. 3: There Is No Us’, is not due out until October. I might have to break down and collect the single issues before then, despite my desire to read them as a unit. Thankfully, the story stands up well to several readings.