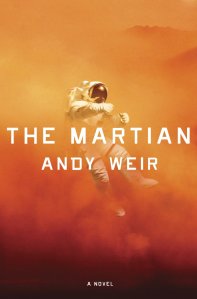 ‘The Martian’ by Andy Weir is one of the most thrilling and absorbing novels I have ever read. Mark Watney is the seventeenth man to set foot on Mars, an order determined months before the Ares 3 Mars Descent Vehicle (MDV) touches the ground. The easy-going botanist/engineer is happy with his slot. He’s on Mars, isn’t he? Living an astronaut’s dream. Unfortunately, the dream lasts longer than the scheduled sixty days.

A dust storm scrubs the mission early. All six crew suit up and make for the Mars Ascent Vehicle (MAV). High winds kick up debris and Mark is almost impaled by a detached antenna and knocked out of line. The antenna hits and disables his bio-monitor and pierces his suit. The last read-outs the rest of the crew get hint that he might be alive, but that his suit pressure lost pressure. An attempt is made to find him, but with high winds tilting the MAV, the mission commander has to make the call or risk five more lives. The MAV leaves without him.

Mark doesn’t die. In fact, in a bizarre set of circumstances that might only happen in Mars’ lack of atmosphere, blood from his wound seals the breach in his suit. He lives, only to be stranded alone on Mars. So begins his journey of survival, which will include a series of firsts for the seventeenth man. He has myriad problems to solve: food is foremost, then a plan to survive long enough to be rescued.

The unique atmosphere of Mars plays an important role in many of his plans and I enjoyed learning the differences between what we take for granted and what Mark must invent. It’s that, his inventiveness, that keeps this novel rolling. His upbeat personality, which understandably squeaks close to the edge of madness from time to time, renders the science readable or even personable. Despite his intelligence, he makes mistakes, though, plenty of them. Some were humorous, many were not.

At no point, during the course of the novel, did I take it for granted that Mark would live through his ordeal, which is why I kept reading and reading until the end. I finished the book in a single day. I had to know how it all turned out for my new favourite astronaut.

‘The Martian’ was originally self-published. His success gained the attention of readers, publishers and film studios. He cut a deal with Random House and sold the film rights. Not bad! This edition has two new covers. US edition pictured above, UK edition right.

With all the science and math, the novel could have been dry. I didn’t find it so, I found it all fascinating. If I didn’t understand something, I took it for granted that Mark did. His life depended on it, after all. Not mine. The scientific exploration is broken up with plenty of adventure and commentary and a good portion of the book is devoted to NASAs efforts to help him from Earth. It’s the humour that really made this story work for me, though. For all the thrills, there are plenty of laughs. There are also more than a few poignant moments. How can there not be? Mark Watney ends up racking up a lot of firsts during his sojourn on Mars.

5 thoughts on “Review: The Martian”