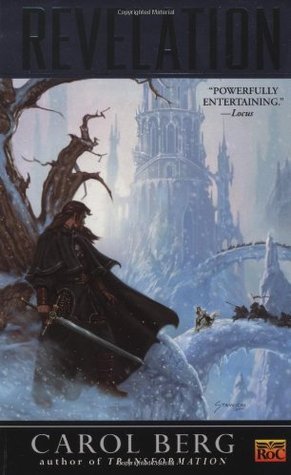 At the end of Transformation, I knew the story was far from done. Seyonne and Aleksander had defeated a demon and prevented a war, but still had to deal with the repercussions. Their victory had been, in part, a private one. The incidents leading up to Aleksander’s possession left a very real mark, and Seyonne had many more battles to fight.

Seyonne has more than demons to battle, however. His every move is scrutinised by the Ezzarians, many of whom still consider him to be unclean, or unworthy. But as they have no other Warden to fight their battles, he is grudgingly accepted. Funny how that works, eh?

The thorn in Seyonne’s side is Fiona. With his wife pregnant, Fiona acts as his ‘Aife’ or guide in the demonic planes. She is also his assigned watch dog and she’s a pitbull. When his wife apparently ‘loses’ their child–the boy is born possessed and apparently left out to die–Seyonne begins to question everything he once believed in.

Revelation is aptly named. The war against the demons is not what it seems, and as Seyonne pieces together the truncated history of his people, he will discover the truth about his son, himself and the Ezzarians. Doing so will brand him a traitor to Ezzaria. Still, as discovered in Transformation, Seyonne does not shy from the impossible. He is willing to sacrifice himself, again.

And, again, Carol Berg stuns with her characterisation and prose. She writes Seyonne, Fiona, Aleksander and Blaise (the leader of a band of outlaws), with all the dogged determination evident in each. Under her talented pen, the world comes alive with fantastic description and the plot weaves inexorably forward, but folded so that the pattern is only hinted at until the proper time.

I did get weary four fifths of the way through. I understood why Seyonne’s sojourn in the demon plane had to be so long; there were a lot of plot points to discover and the changes wrought within Seyonne definitely required the passage of time. It was at about this point I cursed Carol Berg for being such a fantastic writer. Every word has to be read; just about every word is essential to the character and the story, so I couldn’t just skip the slow parts. The ending definitely delivers a reward to the tenacious reader, however.

Adversity brings out the best in Seyonne. Though I missed the relationship between Seyonne and Aleksander, the prince is replaced, in part, by the ever watchful Fiona. Watching their partnership grow and change was as painful as it was delightful. I look forward to seeing more of them and Aleksander (and Blaise?) in the final book of the trilogy, which is already on my shelf.

Revelation is the first book from my 2014 TBR Pile Challenge.