I just pulled two books out of the trash. Sadly, it is not the first time I have done so. What marks this occasion out from all the others is that I retrieved these two novels from my own trash. Yes, I actually threw books away. Or tried to.

There is coincidence involved. A friend on GoodReads recently read and reviewed The Black Company by Glen Cook. I have it on my to be read shelf. It’s been there for about ten years, along with Shadows Linger (The second Chronicle of the Black Company) and The White Rose (The Third Chronicle of the Black Company). I have tried to give these books away through Paperback Swap. (If you don’t know about PBS, visit and start swapping) But they are so old and cruddy, I had to take them off the list. People don’t want books with creased spines, ripped covers and yellowed pages. Neither do I, really, unless I’ve read them and loved them and couldn’t possibly part with them. So, why don’t I want to keep these?

Imagine me sighing. I have so many books. I know I’m not going to read all I want to read before I die and I have finally recognised the fact that I am not going to read everything stacked on the bookcase in my bedroom–where I keep those books I would like to read. I don’t want to be rescued from beneath a mountain of books, or feature on a tawdry reality show. I have accepted the fact I have a habit and that it needs to be broken. I need to part with some of my cherished…I will not call them children. Books, they are just books.

About six months ago, I took pity on the small, sagging bookcase there and thinned the herd. I packed a box of books and listed them on PBS. I donated the hardcovers to the library. Then, about a month ago, I bought a new, sturdier bookcase that looked like it would hold more books. I had a plan, you see. A cunning plan. If the new shelves held more and/or looked less crowded, I could get more books. 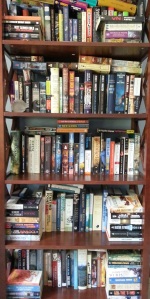 I packed another two boxes. It was time, I knew it was time. As I sorted the books into alphabetic order for reshelving, I found duplicates. Only four, but, seriously, four? I also found books I’d picked up on a whim, or grabbed at a con. There were some I had simply lost interest in–too much time had passed between reading the fist in the series and getting around to the second and I don’t have time to reread the first and if I haven’t read the second all these years later, it’s probably because the first didn’t amaze me.

Some did, though. I can remember loving Hammered by Elizabeth Bear and I’ve had Scardown on the shelf forever. I want to read it, damn it. I have Worldwired too, the third book. I have Jack McDevitt novels and Peter Hamilton. Two of my favourite authors. I have… There are about two hundred books there. Maybe more.

And there were the second and third chronicles of the Black Company. I wanted to read them, but I’d yet to read the first. I had had them for so long, I almost felt obligated to keep them. But they were old and I hadn’t got to them yet and I didn’t know if I ever would.

Part of the problem is I read a lot for review. It’s a blessing and a curse. Books arrive on my doorstep, sent by publishers in the hopes I will read, like and review. I try to keep up with those. I hate the idea of these hopeful books sitting way past their release date without a kindly look from me. I have a Kindle full of ebooks which arrive in my inbox for much the same reason. I request some. Then I have books I buy for myself, find at the library sale or on Paperback Swap. And then, I have my volunteer job. I sort donations to the library for the sale. I get first crack at all the books. We pack nearly 3,000 boxes of them over eight months and I handle about 30% of them before they go into the boxes. It would be a gross exaggeration to say 90% of those end up on the bookcase in my bedroom, but sometimes it feels that way.

The other part of the problem is that I love books. I have thousands of them downstairs in a room we call the library. Those shelves are crowded too. And some of the first were rescued from a dumpster outside a supermarket…in 1980. A set of Dickens. I managed to find all but one. Who knows if they have any value. They’re in nice shape, they were printed in eighteen hundred and something. I have carted them around the world with me and I have built upon my collection over the past thirty years. I have more science fiction and fantasy than classics, but my interpretation of classic has changed as well. That’s another post.

So, I can’t say I’m surprised to have pulled books out of the trash. Not even really those two. I suspect they intend to haunt me. Glen Cook and I will not part company until I’ve read a chapter or two and discovered whether keeping these wrinkled, tired, yellowed, garishly covered old paperbacks was worth it. Hopefully I will not be found with one of them folded open across my face, after the rest of my books have been lifted away.

*Title borrowed from one of my favourite little books, Make Room! Make Room! by Harry Harrison.