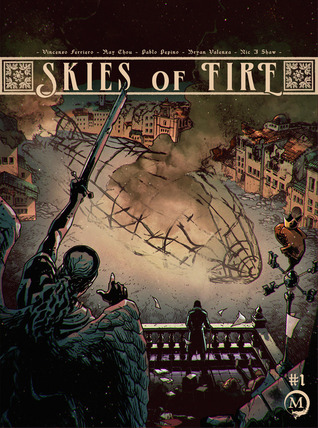 I like a good story, but my choice of comics usually comes down to the art. A good cover catches my eye, as does clever use of colour. Skies of Fire is a really pretty comic book. Inside the front cover they have a wonderfully detailed map of the Aquilan Empire. The style of art within, the line work and colours are consistent with the steampunk flavour of the story.

The comic opens with an airship docking with a tower at Port Prince. Pirates arrive before they finish unloading their cargo and a battle ensues. It looks fairly one sided with the airship going up in flames and the tower left crumbling. The pirates are chased away by ‘blue coats’ who break off pursuit when they enter the massive storm system known as the Expanse.

At The Capital of Monterey, the actions of Captain Pierce are called into question. She is accused of disobeying orders and breaking formation. Basically, her admiral is throwing her under a bus (or over the side of an airship as the case may be). She defends herself by explaining that she disobeyed in order to chase the enemy and then asks permission to lead an expedition into the Expanse. Obviously impressed by her compunction and courage, His Majesty grants permission and puts the crown at her disposal. The politicking against her adventure is fierce. No doubt she’s gained herself more than one enemy. 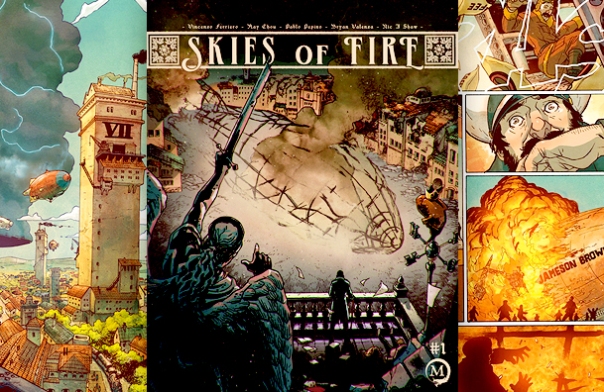 The remainder of the thirty-three page comic is fleshed out with some extras: ‘Unravelling the Expanse’ gives some world building background and information. A copy of the Monterey Tribune does the same. Then there are a couple of pages of names who are the project’s Kickstarter Backers. Finally, the last page includes portraits of the team done in the same style of the comic. Each has a brief bio.

I really enjoyed the comic. The story has just started, but already I’m intrigued enough by the world and the characters to want to continue. Unfortunately, there is no release date available for the second issue, so I’ll just have to keep an eye on their website—which is kind of gorgeous, by the way.

One response to “Review: Skies of Fire”

Leave a Reply to Geek powaaaaa ! – Emi and the Scots Cancel reply